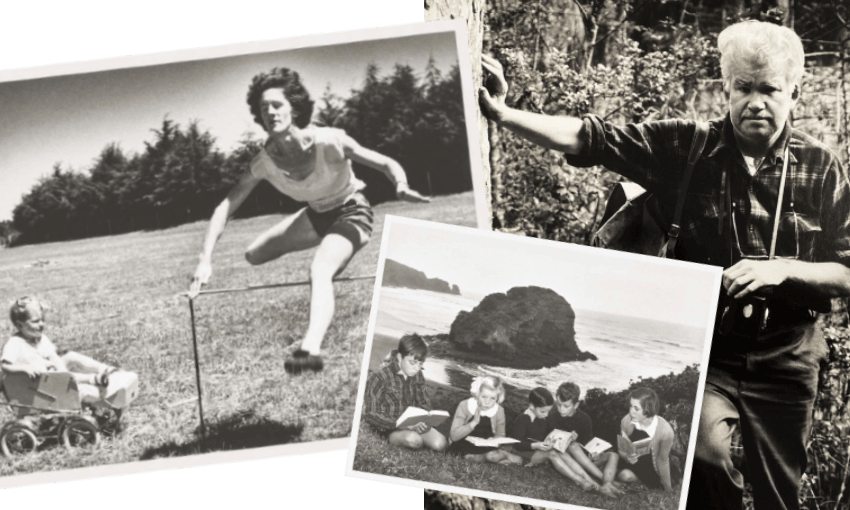 By Sandra Coney
Guest writer
Made possible by

For much of the 20th century, photographer Olaf Petersen tirelessly documented the landscapes and people of west Auckland. His work has been a secret enjoyed by only a few for far too long, writes Sandra Coney.

Excerpt from the book Nature Boy: The Photography of Olaf Petersen. All photographs by Olaf Petersen, courtesy of Auckland Museum.

I am lucky enough to have spent my childhood – and indeed my whole life – in a bach with a suite of brilliant Olaf Petersen photographs on the walls. In the 1950s my father, Tom Pearce, owned a speedboat called Doris, named after my mother, Doris Margaret Pearce. Doris was painted a deep lipstick red, the name emblazoned on the bow in a white flourish. The boat was the typical speedboat of the era, built of wood, with the prow curving gently down to the water, rather than the later shark’s snout style.

There was a summer when the wind didn’t blow at Piha for days on end and the usually boisterous surf beach was transformed into a lake-like serenity. Even grown men wanted to have a play, and so my father and his surf club mates brought the Doris out to the beach and water-skied. Dad was behind the wheel and lanky red-haired Terry Neville and burly Morrie Keary performed on the skis. One Petersen photo shows both men on skis behind the boat – my partner says the Doris must have had a bit of grunt to pull two solidly built men behind it.  The final photo in the series shows the Doris being brought ashore, with a bevy of local boys appearing from nowhere to help the men push her onto the trailer. Stepping through the water towards the boat is a young girl, with a shirred sunfrock over a t-shirt and a wide-brimmed hat designed to stop sunstroke. That girl is me.

Olaf Petersen was the chronicler of the west in those days. If there was something happening on a beach or a farm, or at a community event, he was there recording it for posterity. He was also there out on the dunes or the rocky reefs observing natural phenomena: cloud formations, flocks of birds, lone birds, patterns on the sand, waves breaking, foam on the shoreline and whale strandings.

His photography business required him to take photographs of weddings and events in west Auckland and line-ups of sports teams and club members, but he loved much more to be out in the natural world. Unlike the pictorial photographers of an earlier era, Olaf was in the mould of Henry Winkelmann. Although he took photographs of raw nature, there are often humans in his nature portraits, or at least living organisms. His images are not so much frozen in time, but capture a moment within movement, with the viewer aware that the movement continues after the image is taken. His photographs often convey a story which the viewer has to continue in his or her imagination.

His bird flocks convey the notion of flight, of migration. His topdressing plane creates a gorgeous signature in the sky. His children clamber up sandhills at the exact angle of the horizon, the sand sliding away beneath their feet. Did they ever reach the top? His people are shown living in nature, at home and comfortable in it, enjoying the wild in all its dramatic moods. His landscapes and pastoral scenes are not empty, but show people living in them, working in them, even transforming them. Children do their school lessons against the iconic backdrop of the Te Henga coast; a group of 1950s women in their best dresses are curiously observed by a cow.

In Nature Boy, Shaun Higgins makes the point that Petersen was respectful towards children, and this approach was rewarded by photographs in which the children appear entirely comfortable: they were their own people and had stature and individuality. Of course there are other photographers who are consummate photographers of children. Within Aotearoa you think of Leslie Adkin, John Pascoe (1908–1972) and Eric Lee-Johnson (1908–1993).

But historically there are not too many photographers who do justice to women. Women are often absent, as they are in Winkelmann’s photographs, or they are sentimentalised in their mothering role or marginalised as peripheral witnesses to the activities of men. Petersen stands out as having found women as worthy of documenting as men. He grew up, after all, with five sisters in a household where his mother was experimenting with photography as well as running a house and farm.

This is a period in which stereotypically we are told that women were tied to the kitchen sink – a proposition very much open to question – but Petersen shows them on the farm, running businesses, out in the world, involved in environmental work. A group of birdwatchers includes a woman and a baby in a carry-cot playing with binoculars, identified as ‘Rosemary and Charlotte’. An undated portrait of members of the Waitakere Ranges Protection Society playing tug of war on Te Henga has as the central figure an imposing woman. Labour prime minister Walter Nash is surrounded by men but the focus of attention is a confident young woman playing a piano accordion.

Petersen shows boy scouts but equally girl guides and rangers, and surely his marvellous 1964 photograph of Mrs Avis McIntosh training at leaping hurdles while her infant son looks on from his pushchair is the ultimate portrait of a woman multitasking. Douglas Vesey reclines on Muriwai Beach while a girl – presumably his daughter – competently holds a fishing hand line. He is watching and smiling, relaxed in the knowledge she knows what she is doing.

Petersen gives dignity to ‘women’s work’ by depicting it as essential, even heroic. He does this also with men’s manual labour, but it was unusual for an artist to observe what women were doing, let alone make them central to an image. In Bethells – Outdoor School, a woman is shown taking a lesson with her son. Behind her, billowing on the clothesline, are miles of striped pyjamas and blindingly white nappies. You know she would have accomplished this with the aid of a copper and wringer, not the agitator washing machine that middle-class town women used. She has done all this before she’s even sat down to the important task of her boy’s schooling.

Petersen’s photos celebrate the relative prosperity and calm of these years, a time before the distractions of television, social media and ubiquitous cell phones. It was a period that sought and celebrated egalitarianism, devoid of the economic and social divides which have characterised the current three or more decades. Two things come through from Petersen’s photographs: a sense of community, of social cohesion, of people doing things together, running the show in fact, and then there is a sense of the discovery of the natural world and a delight in being able to enter into it.

Most historic reviews of photography in New Zealand do not include Peterson. That is not to say he was unknown. If you lived in west Auckland over the postwar years, you would have seen his work at local and regional shows and exhibitions. He was well known in his community: you might have been photographed by him as part of a club you belonged to, or you might, like me or Sarah Hillary, have had the very good fortune to have had a moment of your own life captured by him. It seems he never particularly sought recognition in artistic circles, preferring the company of his family, the locals, his tramping club friends. Perhaps he was a little shy, not a life-and-soul-of-the-party person, but he was an astute observer of the world around him, seeing ironies, meanings and glory in people and places others passed by as mundane.