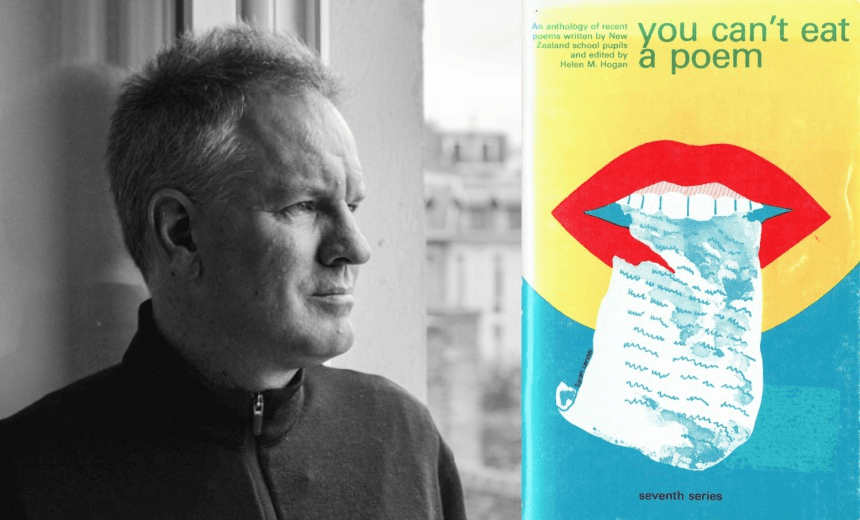 Poetry week at the Spinoff: how an award-winning poet got started

All week this week the Spinoff Review of Books is devoted to poetry in the build-up to the Phantom Billstickers National Poetry Day on Friday. Yesterday we ran an essay by Helen Hogan, editor of 1970s anthologies of poetry by New Zealand college students; today, an essay by distinguished poet Andrew Johnston, who Hogan published when he was a 14-year-old schoolboy in the Hutt Valley.

When I was 13 I started a small blue hardback notebook. In the front I copied short poems I liked – mostly William Blake and famous sonnets by Shakespeare and the Romantics. In the back I copied my own short poems. Most of them were truly dire.

So there it might have ended. But one day – probably in 1977 – I discovered Helen Hogan’s anthologies of poetry by secondary school pupils. Published by Whitcombe and Tombs (and then by Whitcoulls), they’d started in 1973. They had bright covers and catchy titles — My Poem Is a Bubble, I Caught a Poem, I Am Alive …

The arrogance of the writer had me in its grip. Perhaps my boxy little poems could have another life? In the back of my mind, probably, was the grandiose idea that getting published in these anthologies would give my poems permission to start inching their way from the back of my notebook towards the front.

It was too late to submit for the 1978 anthology but I could wait for the next one. When You Can’t Eat a Poem eventually came out, in 1980, it had five of my poems in it. Five! The bar was low, as illustrated by my alliterative masterwork “Winter Wondering”:

Weeping in the wind, why

Sighing softly at the sky?

I’ll spare you the second stanza.

I kept the anthology. When shifting house or chucking stuff out, I’ve discovered it again and flipped through the pages. With mixed feelings – but I’ll never throw it away. As well as the bad poems, there are some good ones. The book was a ray of sunshine in otherwise gloomy years – and gave me a sense of being validated outside the narrow confines of school. I like being reminded of that.

There’s another reason I keep the book, though. Over the years I’ve met several of the people who had poems in it — and many of them have had remarkable success. Sarah Dempsey was my flatmate in 1985; now she’s Justice Sarah Katz of the High Court. The film director Garth Maxwell – with whom I worked briefly on the magazine New Outlook – is in there. As is the novelist and publisher extraordinaire Mary McCallum (Mākaro Press), and there’s a poem by Mt Maunganui schoolboy Stephen Braunias.

The same goes for the other books in the series: scan the list of authors and you’ll see artists, academics, journalists who’ve all made a mark in one way or another. Out of curiosity I checked out Russell Gray, who probably had more poems published in Helen Hogan’s anthologies than anyone else. He’s now a world-leading evolutionary biologist, psychologist and linguist; a director at the Max Planck Institute for the Science of Human History in Jena, Germany; and holds adjunct positions in psychology at Auckland University and in philosophy at the Australian National University.

I’m not saying these people owe their success to having had their poems published in the 70s when they were at school. (Correlation is not causation!) But I’m convinced that it didn’t do them any harm, either.

Writing a poem involves putting down on the page not just words and ideas, but something of yourself. Deciding that it is finished means settling on a shape for a little piece of reality that belongs to you. And submitting it to an editor requires taking the risk that someone else might reject your efforts.

Writing a poem, in other words, is about a hell of a lot more than rhyming why with sky. It’s about engaging with the world, and with your own mind. It can show you how to make sense of the world – literally.

A doctor recently asked me, “Did you have some kind of trauma when you were young?”

Poetry helped with that – and it’s still helping. Just as it has evidently helped dozens of others who were published by Helen Hogan in the 1970s.