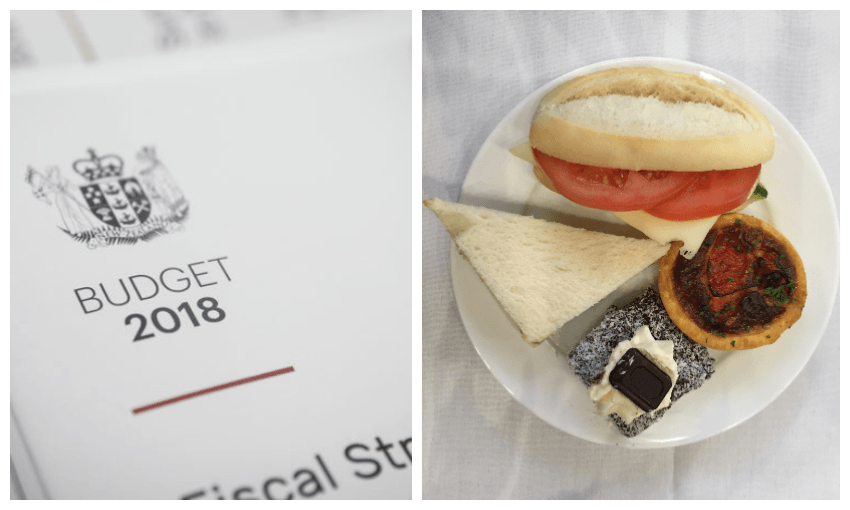 The lamingtons were delicious: The Spinoff joins the pre-Budget lockup

A few hours before the budget is announced to the public, journalists and other interested parties get a preview in a secure room deep inside the Beehive. This year, Jess McAllen was among them.

The night before the budget is released political journalists stock up on lollies. On the day, plates of lamingtons, in red, green and brown are laid out for them. The colours represent the coalition partners (Labour, Greens, NZ First) but the real insight – like an octopus predicting soccer world cup results – comes from the lamingtons left over at the end of the day: all green.

Budget Day – also known as ‘the day breaking news alerts go bananas’ or ‘why does this chronic Facebook meme tagger suddenly think he’s a financial advisor?’ – is when the government sets out its future plans. It dictates where money will be be spent and where it will be cut (RIP the NASA teacher ambassador programme).

The budget is made public at 2pm, but journalists, economic types and analysts have access to it from 10.30am, in a locked room inside the Beehive. This gives journalists enough time to analyse the budget, ask questions and work on stories before the embargo is lifted. Because budgets contain information that can influence the financial markets, no communication is allowed with the outside world once the lockup begins.

It’s like a sleepover, with all the lollies. An exam, with all the pen and paper. A digital detox, with all the blocked internet access. A nightmare, with all those smart and opinionated people gathered together in one curving banquet hall.

There’s a digital clock above the Spinoff table (we’re sharing with Newstalk ZB; Barry Soper arrives late) and at 10.29am a man with a pen tucked behind his ear addresses the room.

We’re told that even in the event of an emergency or security situation the budget’s embargo still can’t be lifted. Presumably there are people in this room who would rather dash out a quick story on state houses and hospital rebuilds than stop, drop and hold under a trestle table.

Treasury staff, who up until now have been blending in with the walls, emerge to drop off media packs which include the budget, brief pamphlets and what must be a ream of press releases. It’s double-sided print though. The coffee cups are also eco friendly.

“Are you the Taxpayers Union?” I ask.

They are, and they offer me a mug. Jordan Williams turns around and sees my name tag.

“Oh, you’re from The Spinoff,” he says, disapprovingly. “I looooooooove The Spinoff”.

I never get the mug.

There are ham wraps next to a sign that says ‘lamingtons’. Is all not as it seems? Is the sweet promise really a pig? I think about Gareth Morgan and lipstick. There are puns and metaphors everywhere – perhaps there’s something in the choice to accent the NZ First lamington with a piece of Whittaker’s chocolate, not Cadbury? I am thinking in riddles and want to call something “dramatic and devastating”,  like Patrick Gower announcing a new poll. I need to get out, breathe some fresh air, fire off an Instagram picture.

It suddenly strikes me that I’m very out of place. I’m not a political journalist, nor very inclined towards economics, and am here because The Spinoff had a spare seat after their data journalist fell ill. Looking around, I see that all the other journalists are reading the pages intensely. So I do the same.

Here are a few things I found interesting, many of which haven’t had a lot of airplay:

So my food metaphor is that the budget is like the vegetarian tartlet I had for lunch: it promised to be good for me, it probably was, but it was also lukewarm. I don’t mind cold tartlets and I don’t mind hot tartlets but where do you stand with a lukewarm tartlet?

Budget 2018
Made possible by

With Budget day fast approaching, how will it be sold to the public? And how will the opposition go about pinning a derisive name on it? Let's look back at some of the most valiant attempts.
By Alex Braae
Staff Writer
8th May, 2018

Government’s health budget must look to the future of care

The health sector needs significant investment, but where is that money going to come from? Grant Thornton’s Pam Newlove says the government needs to look to the private sector.
By Pam Newlove
Guest writer
5th May, 2018

From ambitious to zero budget: an A-Z guide for Budget 2018

With the Grant Robertson's big day just weeks away we've created a helpful (mostly) alphabetic introduction to the mysteries of the annual government Budget.
By The Spinoff
Staff writers
1st May, 2018

Invest in the regions to save Auckland from itself

What might the 2018 Budget deliver on regional economic development, and how will it intersect with our largest city? Grant Thornton's Murray Brewer casts his eye over the options and opportunities.
By Murray Brewer
Guest writer