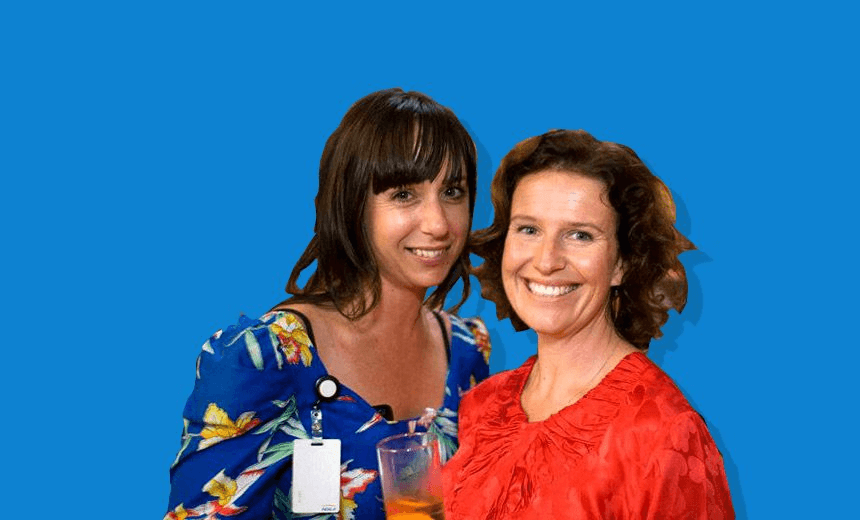 Podcast: Business Is Boring #19 – Angela and Anna of Double Denim on fighting the gender gap in advertising

Women make 80 per cent of household purchasing decisions, yet the advertising industry that tries to sell things to them has a comprehensively horrendous gender parity in creative teams, ownership structures and the pay scale. Today’s guests are out to change that.

Angela Meyer and Anna Dean have started Double Denim, an agency out of Wellington they own and run, doing engaging and interesting work that might just change the world along the way. Coming from an arts, film and marketing background they’re here to chat about a number of projects they’ve set up around equal pay, something called the Ace Lady Network, lady power and other good stuff.

Either download or have a listen below, subscribe through iTunes or read on for a transcribed excerpt.

If you were to go to every client and, say, treat women with respect and like humans, would that be simple enough to work? Because you know, if you look at the media landscape there isn’t a lot of that going on

Angela: What we really wanted to do with the research that we’ve done about the female economy is to put it in monetary terms. Because obviously you go into business to make money, ultimately. I mean you have many other motivations but ultimately you go into business to make money. Which is totally what Anna and I are here to do, you know. So knowing in our business, the pool that we are marketing to is predominantly women, then it’s actually not that difficult to help our clients really understand that if you do want to make the profit that you’re after, or whatever it is that their goal may be, then we really need to target your audience.

And we always say, you know, what does your current audience think and feel? What do you want them to think and feel? And why should they care? And we help them identify who their target audience are and take them through those steps. Nine times out of ten we get people to a point where they go “actually, yeah we do really need to think about developing a product or developing a campaign that really speaks to our target audience. And if that target audience is women, then let’s do something interesting in that space.”

Anna: People have been doing this thing in a kind of paint by numbers [way] for quite a long time now and it’s lazy and it doesn’t actually have to be that way anymore. And one thing we really found is when you do look at quite a lot the advertising where people have tried to target women it has been this whole pink-it and shrink-it idea and we’ve moved beyond that. And it is a very potent and very exciting time because of the age of social media that we live in. I’m also a huge fan of the On the Rag podcast, and just the fact that women’s voices are actually starting to come through in a way that they have never before. So it’s incredibly exciting.

It seems kind of nuts, like so much does, that it’s taken so long as well. To be at the wrong end of 2016 – and it’s been known for a long time that women held the purchasing power in the home–- and yet we still have this situation where there’s an underrepresentation of women in creative agencies doing the work, and the ownership and the creative direction.

Anna: Well just look at Kevin Roberts’ recent comments, that kind of culture has been ingrained and we have been told, to our faces that we would be winning more pitches if we had a man on our team.

Angela: We sort of grit our teeth and you know most of the time we tell them “bullshit”. But you’re totally right, you have to kind of look at that environment and we were looking recently at a really interesting ad, which was a period ad for Body Form in the US, where there were all these women and they were playing gridiron, and they were doing all this kind of very physical stuff and bleeding. Which was great and we were kind of like great, there’s real blood. But also something really didn’t sit right for me and we looked it up and sure enough the people around the creative table were a group of guys.

Anna: So they’re making some headway by showing real blood in a period ad, then actually also creating some very unrealistic expectations around what you can do, like run a marathon, be a boxer, ride a whole lot of horses and punch some windows in.

I want some of these periods.

Angela: Yeah you totally want them if that’s what happens .

Angela: Yeah, just start bleeding and you’ll be fine. So that’s the thing around these creative tables, the people who are making the decisions about how women are going to be represented are predominantly men. So we really wanted to shake that up quite a lot we talk about just shaking up the male, pale and stale ideas.

Anna: And it is interesting as well, just as the Gen Xers kind of take over some of those senior management positions, that a shift is happening. A lot of the boomers have been holding onto these positions, sometimes beyond a level of their own competence, and there’s a real opening that’s just starting to happen.

Business is Boring: Employee experience and why it’s so important

Podcast | Simon Pound talks to Samantha Gadd about how HR is changing, and why she's starting the Employee Experience Design School.
By Simon Pound
Business is Boring boss