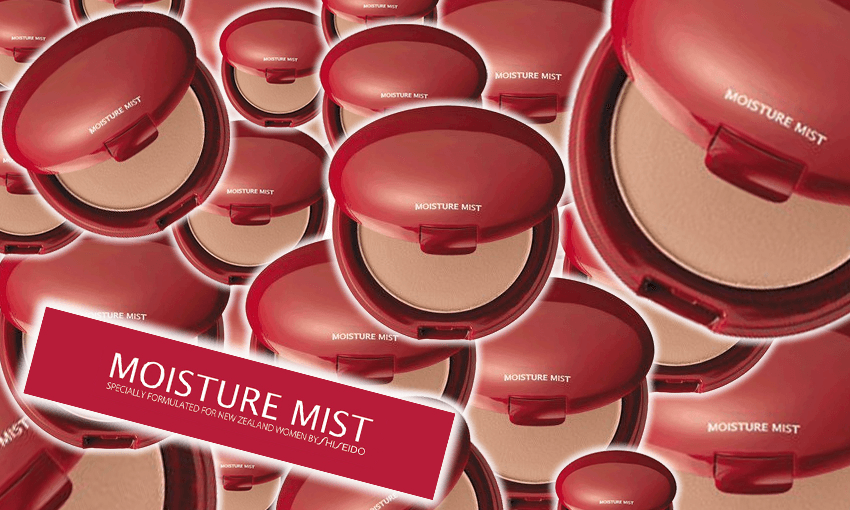 Lost in the Moisture Mists of time: a beloved cosmetics brand departs NZ

“Dear Moisture Mist customers,” read the graphic red and white message posted to the Moisture Mist Facebook page on Monday afternoon, “We are very sad to announce the end of an era with Moisture Mist. Regrettably, due to the discontinuation of some key ingredients production is no longer possible.”

Within two hours, the post had 2500 comments, within four hours it had already climbed to 3.8K. Twenty-four hours later, they’d levelled off at 6.7K, and the post had been shared more than 250 times.

Almost exclusively, these comments come from Kiwi women in desperation and despair at the news that the 41-year-old Moisture Mist brand, a subsidiary of Japanese beauty behemoth Shiseido, was to be discontinued.

“I have used Beauty Cake, cafe au lait, for 30+ years!!!” said Fionna Hughes. “I would say it’s the ONLY product I’ve been 100% loyal to since I started using it when I was 15 (or maybe younger!!) Can anyone recommend an alternate? Argh, I don’t think i can deal with this kind of change in my life!!!!”

I’ve been getting it shipped to Australia for the last ten+ years,” said Debbie Wilson. “That’s my loyalty to you Moisture Mist, not to mention it’s been my only foundation for 35 years… sad sad sad.”

While some Moisture Mist fans had already been made aware of the nightmare that was about to unfold for them (the savviest of whom have already been sneakily stocking up), most were left reeling.

The Spinoff was first made aware of this national beauty disaster via an emotional rollercoaster of a press release issued by Shiseido’s marketing team last week.

“After more than 40 years the curtain is finally falling on the Moisture Mist Range in New Zealand,” it read.

“Regrettably due to the discontinuation of many key ingredients production is no longer possible for many products. Famous for its scarlet packaging reminiscent of Japanese lacquer and the iconic Beauty Cake foundation the range will end its remarkable run on counters and shelves by the end of this year. For many, Moisture Mist Beauty Cake was their first foundation brand and continues to be their go-to foundation.

“Originally designed in 1978, the brand was so revered locally that production continued long after the line ceased distribution internationally. The Moisture Mist range will be available for sale into the second half of this year while stocks last.”

When contacted for further information on what on earth those key ingredients were, the response from Shiseido NZ was, “Unfortunately we don’t have any visibility on the details of the ingredients that were discontinued.”

They did say that Moisture Mist sales have unsurprisingly spiked by at least 50% since the announcement.

Life Pharmacy was also contacted about whether they had seen a surge in sales, but the reply was a politely robotic “Our Category Department have advised that we are unable to disclose the information which you are querying.” Farmers also declined to comment.

The story goes that Shiseido was first introduced to New Zealand after a distributor’s wife discovered it on a trip to Japan, and was so impressed she persuaded hubby to bring it home. The Moisture Mist line was launched in 1978 as a “prestige” side brand, and for some seemingly quite mysterious reason (formula? Shades? Peer pressure? Lack of other options?) took hold here in Aotearoa like nowhere else in the world.

So much so that when costs eventually led Shiseido to can its manufacture in New Zealand in 2008 (the last major international cosmetic company to manufacture on our shores), Kiwi management had already sweet-talked the Tokyo head office into keeping Moisture Mist churning out exclusively for us.

So perhaps a lack of viability in a huge global marketplace is the true reason the curtain’s coming down on New Zealand’s most beloved beauty brand, and they just didn’t want to hurt our feelings. Whatever the real reason, stay out of the Shiseido aisle at Farmers unless you really need to be there, and expect to see a Moisture Mist black market open any day now.