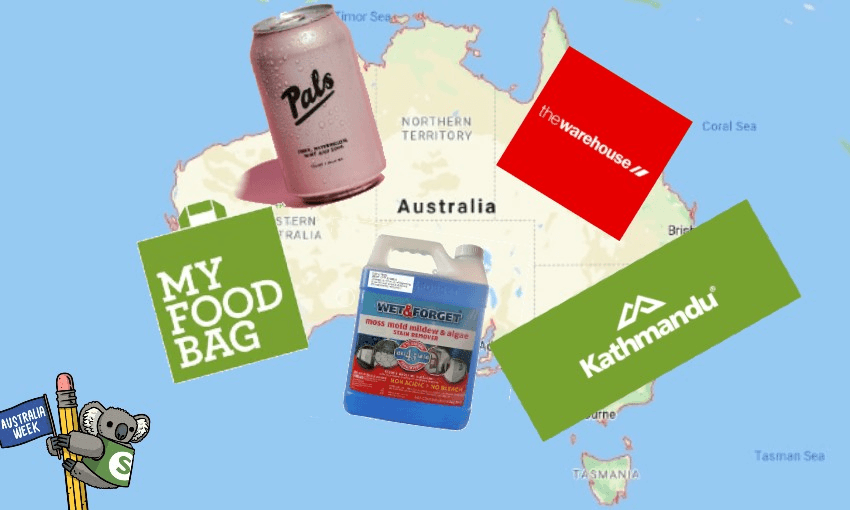 Australia Week: Trans-Tasman commerce has always been a big deal. So we take a look at some of the New Zealand companies that have successfully expanded across the ditch and cemented their place in the hearts, and malls, of Australia.

You don’t have to travel far in New Zealand to find Australia. Of course, with the bubble now open you can fly there. But really, if you want something Australian, all you have to do is pop into your local boutique Westfield Mall. Chances are the majority of the shops in there came from Australia, or are controlled by Australian parent companies. From Event Cinemas to Rebel Sports, T2 to Jay Jays, Countdown and Cotton On and Coffee Club and four out of five of our major banks – our hallowed shopping mall staples first came from across the Tasman. Why, even Westfield itself is Australian-owned!

It should be a reassuring testament to the intimacy of our bilateral commerce. Yet, the idea that so much of our leisure and consumption habits insidiously fall under the green and gold yoke of Australia is somewhat disturbing. And it begs the question – are Australian malls filled with New Zealand retailers to the same extent? Due to the economic imbalance between the two countries, most certainly not. But there are a few cases of upstart New Zealand businesses and brands expanding across the Tasman and successfully finagling their way, permanently, into Australia’s lucrative market. Here are a few of them.

One of our most popular home-grown shopping mall icons, Glassons started in the 1990s as the female-focused arm of the much older Hallensteins Brothers company. A few years later the company expanded to Australia, but in 2003 it found locals weren’t too keen on the male clothing offerings and began closing the Hallensteins stores. Glassons, however, had found the right formula, and has been doing a roaring trade ever since, with 32 stores across the country.

Another classic mall fixture, Kathmandu was founded in New Zealand in 1987, but opened its first store in Melbourne’s iconic Hardware Lane the same year. By 1992 it had opened stores in Sydney, Brisbane and Canberra. After re-entering the New Zealand market, it became listed on the Australian and New Zealand stock exchanges in November 2009.

Acquiring Rip Curl in 2019, it’s now a behemoth of outdoor products, with 165 stores – the majority in Australia – and 4,000 employees across both countries.

You’d have to be a myopic country indeed if you couldn’t appreciate the awesomeness that is Chipmunks: the indoor play centre company that was founded in Dunedin in 1996 and is headquartered in Port Chalmers. Fortunately, Australia embraced the concept and now has 22 branches across the land, while New Zealand has 17 franchises, and even Indonesia has a few.

I’m in my 30s now, and I don’t have children, so I don’t go to Chipmunks that often. But I suspect the experience and business model is still the same as I remember it: your parents drop you off for the day, you consume a bunch of sugar and go absolutely ballistic for a few hours in a padded, consequence-free world, and invariably vomit in the ball pool.

Other than on commercials on either side of Mike’s Minute, you don’t hear that much about the success story that is Wet and Forget. But born from one New Zealand bloke’s DIY project to rid the earth of mould, those bottles of viscous blue chemicals are as Kiwi as they come. There are now 20 stores in New Zealand, but since expanding in 2003 the chemicals are sold widely across Australia – and the US, and the UK, and soon, potentially, in Europe!

Other than wine and craft beer, New Zealand’s alcoholic beverages aren’t likely to be embraced with any zeal across the Tasman; Cody’s and Lion Red are acquired tastes after all. But Pals – the high-flying darling of the low-sugar RTD/seltzer movement – has cracked the code to the Aussie market. Earlier this year it announced Australian food and hospitality company Endeavour group will be launching Pals into local outlets BWS and Dan Murphy’s, allowing thirsty and overheated Australians to chug back “the best tasting ones”.

Of course, not every New Zealand business has made it in Australia. Thriving in a much larger and more competitive market requires more than just solid performance at home, and small New Zealand fish can easily get gobbled up when they go swimming in the big pool.

The Warehouse was no small fish, but it got eaten all the same. Expanding to Australia in 2000, it acquired Clint’s Crazy Bargains and Silly Solly’s retail chains, which had 117 stores between them. It opened its distribution centre in Melbourne, but by 2005, due to consistent underperformance, the red sheds were sold to Australian investment companies for $99m, which sounds to me like “a bargain”.

New Zealand’s meal delivery kit company exploded onto the scene in 2012, and quickly expanded to Australia two years later before making a profit back home. It was a risky move, but due to the lack of competitors in Australia at the time, it was seen as a shrewd move.

“The Australian market is quite infant, and our offering is really slick so I think we can do really well over there,” said cofounder and CEO Cecilia Robinson.

The concept ostensibly did do well, with almost 30,000 customers in 14 cities across the two countries by 2015. However, in late 2016, the Waterman Capital investment prompted a restructure, and My Food Bag made the decision to quit Australia to focus on New Zealand, where it remains a popular household name, eventually re-engaging Australia via an ASX listing in 2021.