In light of tomato prices plummeting to new lows this week, Amanda Thompson asked a bunch of chefs how to make the most of those cheap as toms.

What can you buy for 8 cents? Nothing. If you ask a bunch of boomers they’ll go all dewy-eyed with recollections of a trip to the flicks and enough left over for an ice cream, but since the turn of the century, nothing. Unless you wanted a kilo of tomatoes, that is.

For one crazy, beautiful day this week if you zipped into Hastings Pak’n Save (Wednesday) or zapped into Royal Oak Pak’n Save (Thursday) with a 50 cent coin, you could have left the building with 3kg (10kg if you were in the Stings!) of perfectly good fresh tomatoes in your hand, AND a bunch of change to jingle in your pocket.

We’ve all seen supermarkets engaging in loss leader price wars before, but 8 or 9 cents a kilo – for anything – is diving to new depths. Apart from bragging rights at the end of the year Pak’n Save Christmas do, it seems the “warring” stores are just in it for the publicity. Tomatoes NZ general manager Helen Barnes answered the question on all our minds in Hawke’s Bay Today when she confirmed that supermarkets “wouldn’t be making any money at that price”. Poor supermarkets!

Chef Kelda Hains from Wellington restaurant Rita is more concerned about the growers. “Not many things make me feel more despondent than the idea that we don’t value the labour of the people who grow and harvest our food. What have these growers given up to have these plants in their greenhouses or fields for no return?” Kelda admits that there is no right way to manage something as complex and personal as daily food choices, but her worries remain. “It’s just good to hold the workers and growers in your mind as you cook.”

And what are you going to do with three whole kilos of ripe tomatoes anyway? John Pountney from Auckland Italian restaurant Cotto is dubious that you would be getting the best-quality tomato at 9 cents a kilo. “I’ll be honest, they’ll be bog-standard supermarket tomatoes, and the goal will be to get as much flavour as humanly possible in there. A slow roast might be the way, then you can freeze them in small batches for use in soups and stews later.”

I love this idea. If you were to be frying, say, a handful each of finely chopped olives and bacon in olive oil, or maybe anchovies, and then you were to add some dried chilli, maybe oregano or parsley, and if you were to then mix it all together with John’s slow roast tomatoes and lavishly coat it over some pasta with a metric shit tonne of grated parmesan – boom, baby. I’d definitely be your best friend.

You could actually just throw your bulk tomatoes, bagged, straight into the freezer if you’re using them for soups and stews later. That’s how my mother handled it. Her philosophy was that if you perhaps ended up with eleventeen million freezer burnt blobs iced on to the bottom of the Kelvinator two years later, so be it. Back in the day my grandmother dealt with a seasonal glut by boiling the painstakingly skinned tomatoes up with a lot of sugar and turn them into Mock Raspberry Jam, the raspberry flavour coming from a bottle of cordial syrup and some jelly crystals. You can still find this recipe on Pinterest or the odd budget cookery blog, but please don’t. Even in the 1970s it felt (and tasted) deeply wrong.

If you’re so bougie you can’t eat the skins either, blanch the fruit (dipping them in boiling water for about a minute, then running under cold water) should make it easier. Although not so easy that, honestly, I think you should bother.

Yael Shochat from Ima Cuisine in Auckland agrees with me that blanching mass tomatoes is “a pain”, but, unlike me, has come up with a clever alternative: “Put a cross in them with a knife, then cram as many as you can in an oven tray and roast them until the skins separate. Then you can peel them when they are cool.”

Shochat suggests we then use those smoothly skinless toms for making shakshuka, a recipe from her book 2016 cookbook Ima Cuisine. When Shochat serves this in the restaurant, she adds home-made merguez sausage, but you can substitute with a good chorizo. 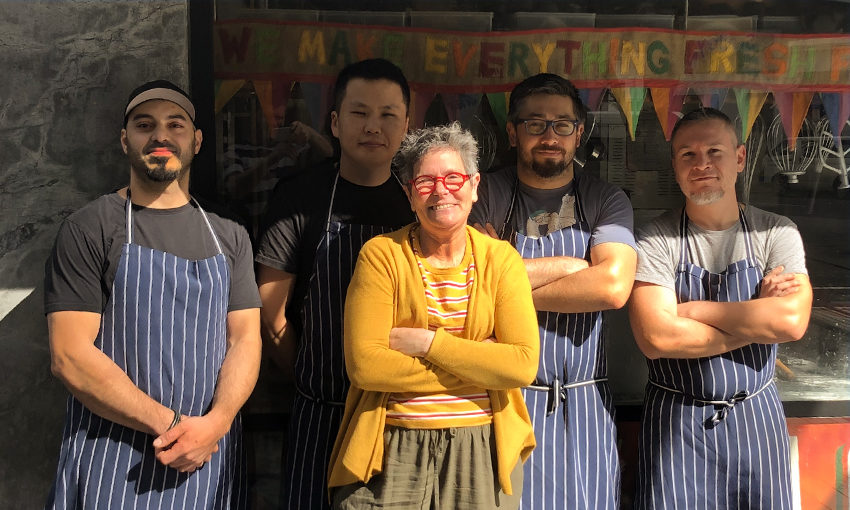 Yael Shochat outside Ima Cuisine with some of her staff (Photo: Supplied)

Cross the tomatoes’ skin and put in an oven tray. Roast for 8 minutes then remove from the oven, cool and remove the skin. Halve and peel the onion, then thinly slice into half-moons. Finely chop the garlic and chilli. Quarter the tomatoes.

Heat the oil in a large oven-proof pan for which you have a lid. Fry the onion on medium heat for 10 minutes, until soft and lightly golden. Add the garlic and chilli and sauté for another minute. Add the tomatoes and cook for a further 5 minutes, stirring occasionally. Sprinkle with salt and put the pan in the oven for 10 minutes to reduce the liquid.

Return the pan to the hob and set the heat to a simmer. Taste the sauce, and season if needed. Make eight wells in the mixture with the back of a tablespoon (don’t make the wells at the edge of the pan, or the egg inside will cook too quickly). Crack an egg into each well. Place the lid on the pan and simmer on low heat until the whites are set but the yolks are still runny.

Transfer a quarter of the sauce plus two eggs carefully into four wide shallow bowls. Sprinkle each egg with a little salt and serve with the bread on the side.