Amanda Thompson doesn’t really do Anzac Day. But what she does do is remember the people she knew who had a lifetime to remember stuff they didn’t really want to, because of a war they didn’t ask for. And she does make Anzac biscuits.

All my grandparents suffered the war, like all the grandparents of anyone my age. Some of them two wars, even. It was hard to imagine as kids, as we watched our walk-shorts-and-socks wearing, grey-haired and church-going elders pottering about in their golden years. It also didn’t help that nobody we knew would ever talk about living through such an extraordinary thing. My whole class once found out that our otherwise gentle and bespectacled art teacher flew a British bomber across Europe; performing bravely under intense cross-examination from a bunch of nine-year-olds, he refused to tell us how many Germans he’d killed. “I like to think,” he replied firmly, “that I didn’t kill anyone.” I suppose if I was him, I’d like to spend the rest of my life thinking that too.

Sometimes you’d get the funny stories, the ordinary ones about how the baby (your dad) once wore pyjamas made out of sugar bags because of the war, how Great Aunty Whatsit drove tractors because of the war, how old Uncle Thingy met his wife at a dance in some posh home he would never, ever have been invited to if it wasn’t for how much he looked like Clark Gable in his uniform because of the war. But mostly, our grandparents lived up to their moniker as The Silent Generation and didn’t tell us much about it at all – especially not the heroic and terrifyingly violent bits. We got those stories from history books and Hollywood, just like everyone else. 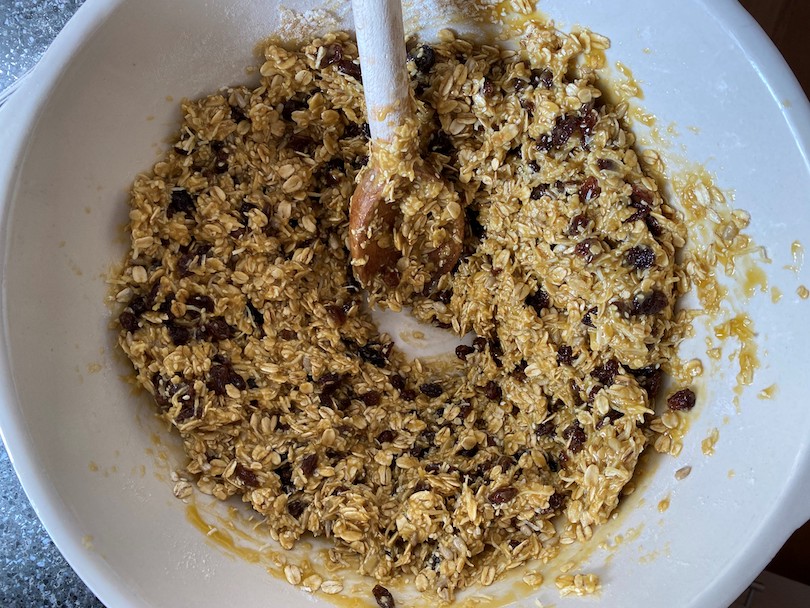 In 1994 when the 50th Anniversary of the Battle of Cassino came up, my poppa put his name down to be one of the veterans who travelled back to Italy with the NZ Army. As if a door had been cracked open to the light, he surprised us all by suddenly beginning to constantly talk about his war – sometimes in Italian. My nana was bewildered and indignant. “I had no idea he could do that. I’ve been married to him for nearly 50 years and he’s never said a word!”

Poppa even brought out his souvenirs. They were the usual stuff you bring back after a trip – little, light things you can squeeze into a bag. A ripped-up fascist flag riddled with bullet holes; an Italian newspaper; some black and white photos of young men smiling, sitting in jeeps, next to camp fires, holding cups. A couple of photos that were just the backs of hundreds of people’s heads, blurry sacks of something hanging from a building in the distance. The blurry sacks turn out to be the bodies of Mussolini and his mistress.

The stories got worse, which is to be expected I guess, because so did Poppa’s war. He lied about his age so he could enlist and be sent to Europe at 17, and I imagine he really regretted that later. He never said. But he did end up getting stuck in post-war Europe in some sort of military policing type role until 1947, when he came home desperately ill with what he called jaundice and what my nana called “all that drinking”. He didn’t really deny it. He said you had to drink, everyone drank; a bloke could go doolally with what he saw, without a drink. I wonder what went through his head every Anzac Day, every year. Maybe you could be forgiven for just wanting to get blitzed and forget about it altogether. I don’t really do Anzac Day myself. And the more years we put between ourselves and the World Wars, the more odd the whole commemoration seems. I don’t like war or armies particularly, no matter whose. I don’t want to have a party about it. It also seems a bit mad to me that I have to now add a disclaimer for the benefit of the knee-jerk fringe of the comments section and say YES of course I support veterans and NO I don’t blame individual soldiers – my grandfathers, for example – for just doing what they were told. I’m just not sure I want to glorify the fact that people just did what they were told either. You see my conundrum?

What I will do though is remember the people I knew who had a lifetime to remember stuff they didn’t really want to, because of a war they didn’t ask for.

And I will make Anzac biscuits.

I have trialled a lot of versions of this recipe over the years – and a lot of different ingredients. I think it was originally from a 1990s Australian cooking magazine, scandalously. This recipe is huge but you can easily halve it if you want. I also like adding extra bits to my Anzacs; today I have chosen sultanas, sesame seeds and sunflower seeds to enhance the standard oat and coconut flavours. Pecans or cranberries or pumpkin seeds are also good. A lot of people might protest this variation of a classic but then a lot of my forebears fought for my freedom to lay down the yoke of tyrannical recipe shaming, and far be it for me to ignore that sacrifice now. 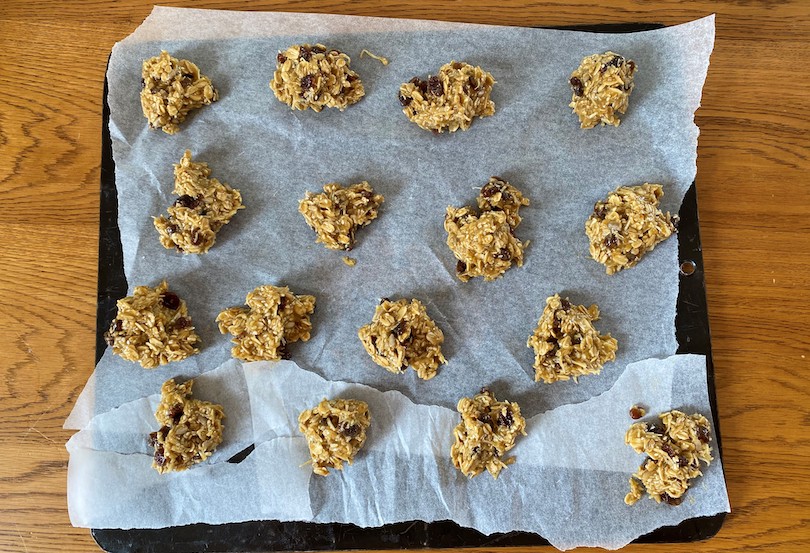 NOT SO CLASSIC ANZAC BISCUITS 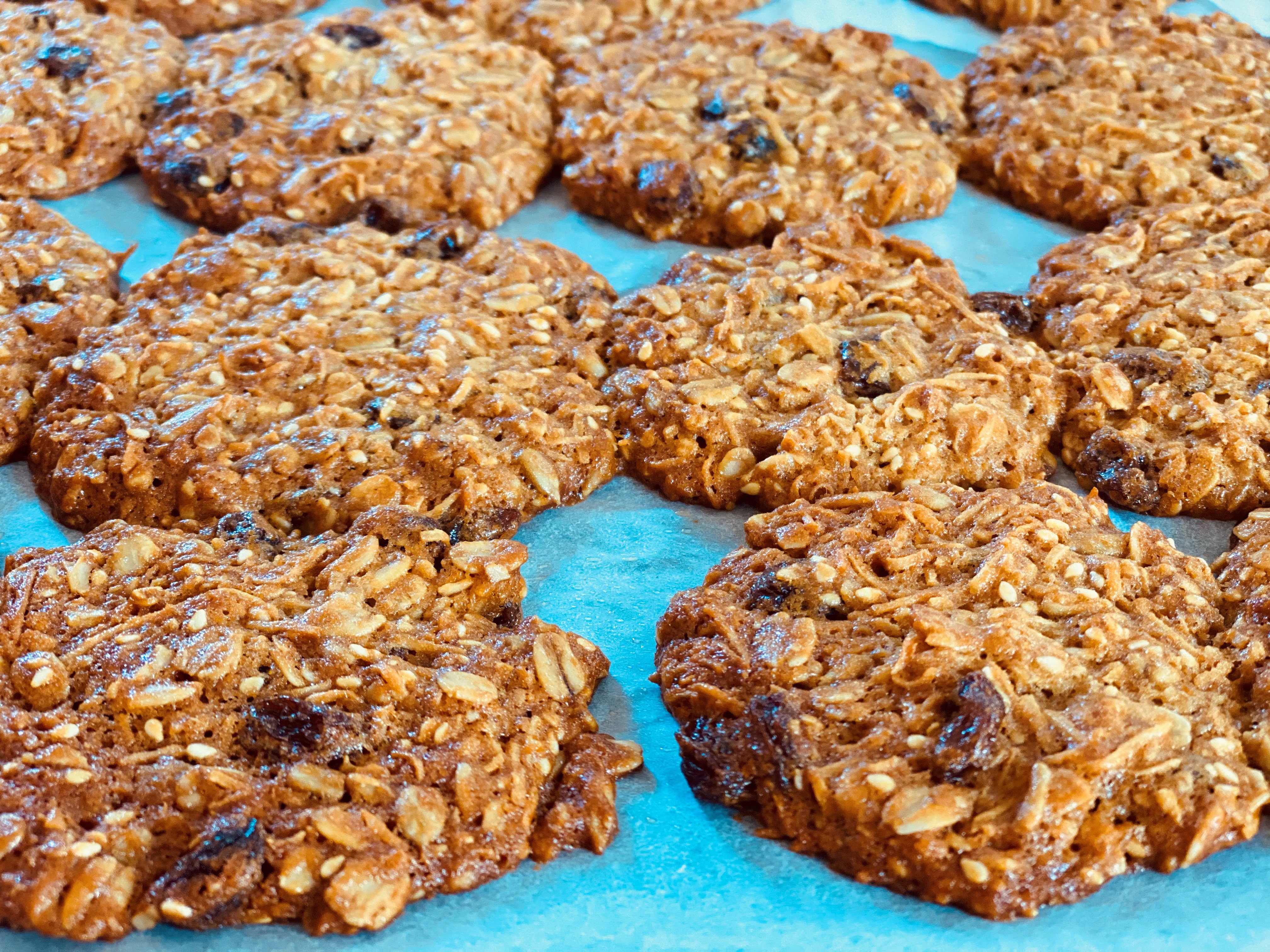 The finished Anzacs in all their glory (Photo: Amanda Thompson)

Preheat the oven to 160ºC. Put all the dry ingredients, except the baking soda, in a large bowl.

Melt the butter and golden syrup in a large pot and bring to a boil briefly. Remove from the heat, add the baking soda and boiling water, hokey pokey styles, and then pour the lot into the mixing bowl.

Place a spoonful onto baking paper however you wish – for a neat shape roll into balls then flatten with a fork, or just dump a splodge and run, I won’t judge. They all end up tasting the same.

Put in the oven and bake for 15 minutes, then cool before enjoying in an appropriate state of solemn remembrance, with a cup of tea for my nana or a crate of beers for my poppa. Cheers.

*These are the optional bits. If you are a dull person who only eats dull biscuits, just substitute these ingredients for equal amounts of dull oats and coconut.