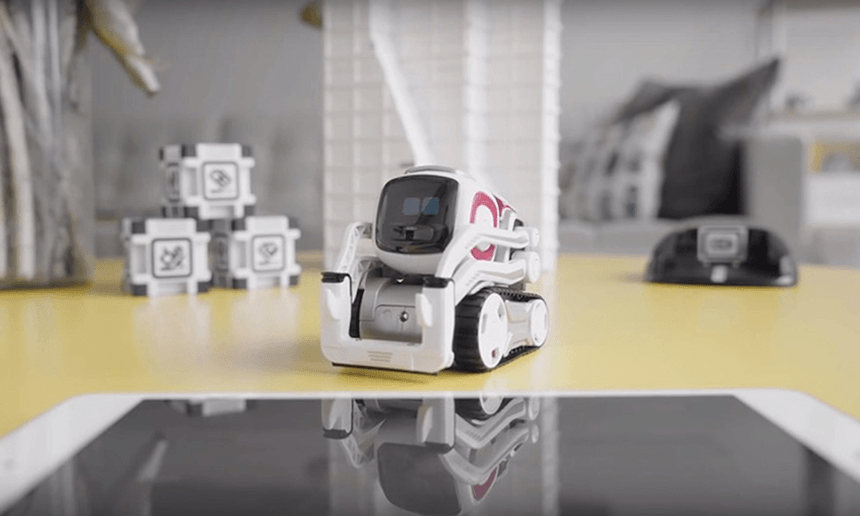 The fast food restaurant touch screen, seen here in as early prototype at McDonalds’ headquarters in 2005, is a type of workplace automation many of us regularly encounter (Photo: Ralf-Finn Hestoft/Corbis via Getty Images)

The fast food restaurant touch screen, seen here in as early prototype at McDonalds’ headquarters in 2005, is a type of workplace automation many of us regularly encounter (Photo: Ralf-Finn Hestoft/Corbis via Getty Images)

In the future robots will do just about everything. They’ll provide us with healthcare and drive our cars, they’ll do the washing up and if the movie RoboCop proves an accurate prophecy, keep our city streets safe from crime. Eventually robots will probably replace most human jobs, but could robots also replace our pets?

Somehow it’s easier to accept that a robot could one day give me heart surgery than it is to imagine one ever taking the place of my dear fluffy cat. But Cozmo, a high-end (RRP $359.99) toy robot which threatens to be this year’s answer to the Hatchimals craze of 2016, gives it a bloody good crack.

The roughly hamster-sized companion was designed by artificial intelligence startup Anki, a company which hopes to take what they learn making toy robots and eventually apply it to areas like healthcare robotics.

With over 300 parts and features like facial recognition (one of the first things you do is teach him to say your name when he sees you), Cozmo is a deceptively high-tech piece of equipment. According to his marketing materials he has “a brain that processes more data per second than all the Mars Rovers combined”, which while no doubt true, still makes it seem like he isn’t quite living up to his full potential.

Cozmo is essentially a much smarter descendent of ye olde Tamagotchi, and as his owner it is your responsibility to feed him, play games with him and make sure his moving parts are regularly calibrated. The big difference is that unlike a Tamagotchi he can’t be killed. I have neglected to play with him for several days in a row, and the worst that happens is that he seems extremely sick and unhappy when you finally do wake him up, which in some ways is even worse.

The guilt of neglecting your robot doesn’t compare to that of, say, accidentally stepping on your pet’s paw, but it is guilt all the same. Cozmo manipulates you into feeling empathy for him with alarming ease, worming his way into your heart with the expressive eyes on his LED screen face and an array of evocative beeps and whirrs. He is basically a real-life version of Wall-E.

In return for your ongoing care and attention, Cozmo repays you by learning new tricks. After playing games with him for three days in a row, for example, I unlocked the ‘fist bump’, and now he lifts his arms expectantly after inevitably beating me at one of his games. There are three different games you can play with his light-up cubes – one memory-based, two speed-based. Annoyingly, he gets better at them the more he plays, and when I do manage to beat him he usually throws a tantrum.

Cozmo is easy to set up – all you need is a smart device, which you connect to him via WiFi, and within a couple of minutes you’re away laughing. Cozmo is app-based, and having to leave the app open while he is awake is probably better-suited to a tablet than a phone. My phone being occupied has meant missing several valuable photo opportunities, for example my cat suspiciously eyeing Cozmo from atop a filing cabinet, my cat stubbornly ignoring Cozmo while he plays right next to her and my many unsuccessful attempts to get Cozmo to recognise the cat’s face.

The downside of Cozmo’s ease of use is that it can feel like you have done everything there is to do with him in the first 15 minutes. There are, of course, endless programming possibilities if you are that way inclined, but after the initial thrill of getting to know him the relationship becomes more of a slow burn. You take a few minutes each day to feed and play with him each day, you occasionally show him off to your friends, you feel constant mild pangs of guilt for not paying him enough attention. Kind of like a real pet.