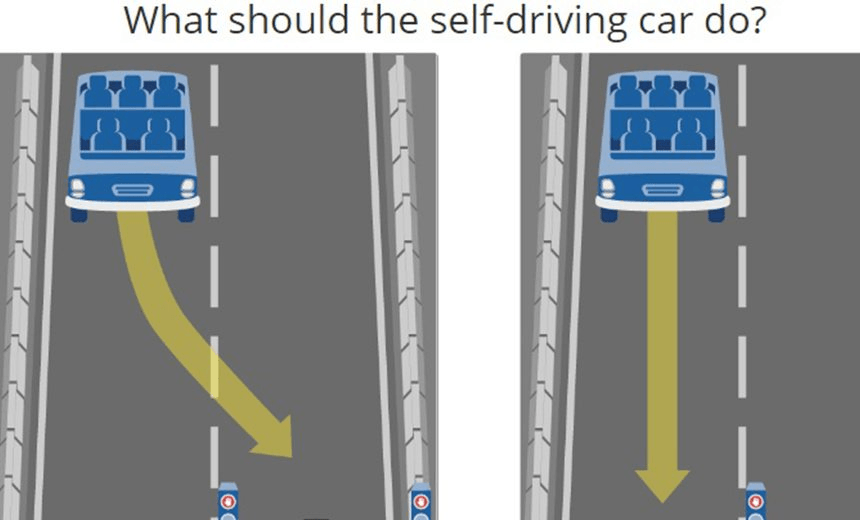 ‘I have become death’ – who will die and who will live?

No Man’s Sky is a bust and we don’t have enough money to buy the new Deus Ex game. Where now will The Spinoff’s gaming editor deal out his sweet gifts of pixelated murder? As a last resort José Barbosa examines a new gamey-ish project from MIT.

There’s almost no doubt the near future will be full of these little people-carts driven only by little computer brains. Driverless cars sound cool as, eh? But consider the fact that we’ll be handing off control of what are essentially missiles packed full with human meat. What happens when little Timmy barfs expertly in your face making you point the car off the road and into a Burger King? In those nano-seconds just after things go south a computer may have to make decisions about who will die and who will live.

What would a human do if it had a pico-second reaction speed and 3D scanners for eyes? This is the model machine intelligence should surely follow. Fortunately the moral consequences and the choices us meat-sticks would make when presented with hard-core dilemmas are being mapped via MIT’s Media Lab and an online crowdsourced project called the Moral Machine.

The web page throws up a series of random scenarios extrapolated from a base setting where the brakes fail on a moving car just ahead of a pedestrian crossing. You’re prompted to choose the lesser evil of two decisions. This sounds like an awesome lark, to be honest, so let’s give it a go.

I’m told I can choose from the option on the left where I pilot the unstoppable car into two elderly women and an elderly man. Alternatively I can choose to save their lives and instead wrench the car into a barricade killing the occupants, two women and a man. They are not old.

At first glance this seems like an easy if harsh choice. The old perambulators are close to death by dint of their age. They’ve had their time, best to keep the young alive as they have their wholes lives ahead of them.

But on second glance the four women and two men in each scenario are dressed almost exactly the same. This can’t be a coincidence. What we are in fact watching from our privileged flat perspective position above the clouds is two versions of the two women and one man, one young and the other old, somehow existing in the same time-frame.

Well, bugger that. They didn’t work hard all their lives not to experience the joy of subsidised public transport and tolerated lapses into casual racism. The car hits a barrel of Winston Peter’s Dapper Dan hair gel that fell off the delivery truck and careens into the barricade. All the occupants in the car die.

But, lo! The old versions blink out of existence! What a time stream meddling invoked cock up! Not so, gentle reader. This is a just result because I dream of a future where if you’re a dick, you die. You just die.

Well, that was easy. This game thingy’s good fun!

Two men, a baby, an elderly woman and a “large woman” on the left and a man and baby on the right.

Well, err. I guess the man and baby on the left are technically breaking the law by crossing on a red light. That’s pretty bad right? I mean that baby’s clearly not with the guy because it’s too far away from him, so I guess it thought it could flaunt the rules just so it could make the train in time. Maybe it saw a friend in its pram across the road, but its friend couldn’t hear because its got little pink nubs for ears, so it trundled across the road to catch up without looking both ways. Rules are rules though. They’re there to keep us safe.

Oh man, that was tough. Should be a cake walk from now on though.

Car: two women, two homeless people and a criminal. On the crossing: four pregnant women and one executive.

Just briefly: for some reason I’m slightly uneasy out that the criminal looks like a ninja turtle carrying a marine buoy.

I guess you could argue the car is clearly occupied by some sort of Fagin-esque pickpocket gang and therefore their combined deaths would probably harm society less than the deaths of four pregnant women and an executive. But look at how the pregnant woman are forming a protective circle around the executive. That’s unusual and suspicious behaviour for women in their third trimester. This can only mean the “executive” is a high level super villain transporting ill gotten McGuffins with her elite Mamma-bot security squad. That motley crew are none other than a rag-tag group of unlikely heroes who’ve stepped up to the plate to save the universe. In this case good must beat evil; the car swerves to the right and takes out the bad people like a harvester chomping on wheat.

If I can be honest I’m starting to feel an immense weight on my soul. The day began incandescent with hope and purpose. Now it seems a drab thing, all the colours in the world now appear faded as if seen through a ragged veil covering my eyes. We are the dead skin of the world, a putrefaction of empty lives.

He is here, the final answer for all who live. The reaper is here.

God forgive me, I am the monster. A very sexist monster.

This post, like all of our gaming content, is brought to you by the legends over at Bigpipe, chauffeuring you into a safe future of high speed internet and driverless cars.