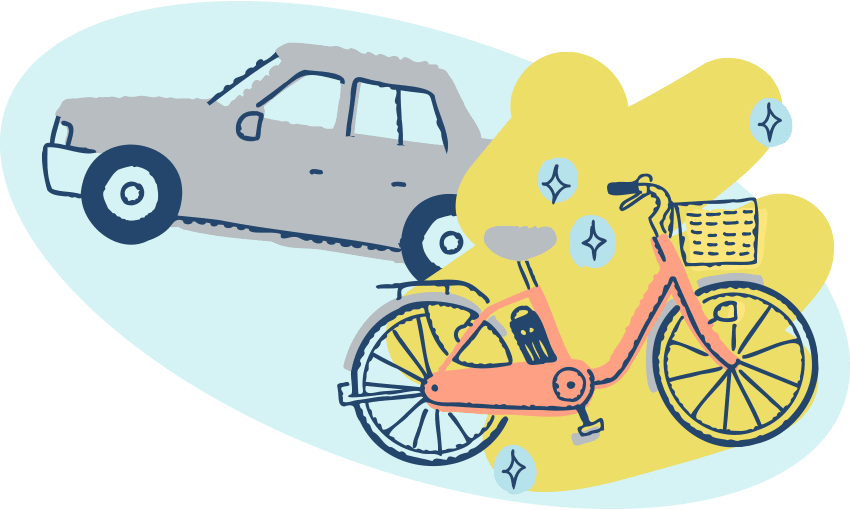 Petrol’s recent eye-wateringly high prices may have you wondering whether the costs of using a car outweigh its benefits. For many e-bike owners, ditching the gas-guzzler is one of the best decisions they’ve ever made.

“I adore the way it makes me feel, surging up hills like a fit eight-year-old is pure joy.”

Jane Strange, a student at Unitec, recently transitioned from commuting via car to riding an e-bike. She’s one of many who have made the switch, as ever-increasing petrol prices and environmental concerns push people away from fossil-fuel vehicles.

“We are seeing a strong surge in interest right now as gas prices rise,” says Michael Tritt, owner of e-bike retailer Electrify, “and the prospect of further rises is causing people to reassess their transport options.”

But for those who have been using their car for a long time, the prospect of replacing it with a bike can be daunting.

There are a few big motivators for using an e-bike over a car.

First is that big fat “E.” An e-bike, like any other electric vehicle, is significantly more sustainable than any gas-powered car. “If you’re motivated by environmental concerns, e-bikes are one of the cleanest forms of transportation available,” says Tritt.

“Bicycles are very efficient machines anyway, so adding an electric motor to that makes a really efficient and clean mode of transport compared to just about anything else.”

But if you’re just trying to be green, why not use an ordinary bike?

The answer lies in the benefits of that electric motor. “You can go further, faster, and without as much physical effort,” says Tritt. Vitally, this means e-bike users tend to be on their bikes far more often. “You may have a bike in your garage gathering dust, but if you’ve got an e-bike that’s not going to happen.

“You’ll be out on that thing three, four, five times a week.”

That ease of use makes e-bikes a more realistic option for those who don’t want to ride into the office covered in sweat. Beyond that, an e-bike is faster than a normal bike and, depending on your commute, could actually be faster than driving.

“If you’re trying to get into the central city at peak times, an e-bike is going to be a great option,” says Tritt. That is, of course, “unless you have to cross the harbour bridge, don’t get me started on that.”

The Auckland Council’s harbour cycling project was cancelled last year, just three months after its initial announcement – and has remained a sore point for cyclists.

But the most convincing motivator for trying an e-bike is cost. By saving on petrol, parking, and servicing, riding an e-bike can do wonders for your bank statement.

“I tracked my car expenses prior to buying my e-bike, yes I’m one of those people,” says Kyle MacDonald, a psychotherapist who switched from driving two years ago. “Within a year my bike had paid for itself.”

But what about that up-front cost?

For some, the search for an e-bike ends as soon as they see the price tag.

“The up-front cost is a challenge for a number of people,” says Tritt. “It’s a barrier to people who are in their 20s or don’t have as much disposable income.”

Amy Stewart, a writer who switched to an e-bike last year, agrees. “I’ll admit that I spent more on the e-bike than I ever did on any of the early-90s Toyota imports I’ve owned. The cost is prohibitive for most people.”

“I think there’s more the government and employers can do to help facilitate people into e-bikes,” suggests Tritt. “It’s the up-front cost that’s the issue, not the ongoing cost. If I ride a hundred kilometres on my e-bike each week, it only costs about $0.20 worth of electricity.”

Tritt advises against spending any less than $2000 for a bike. Will they get cheaper? “Not really,” he says.

But it’s not all bad news, as the quality of bikes keeps improving. “That entry level price point of two to three thousand hasn’t really shifted, but the level of componentry is better than what it was. I think that trend will continue.”

That cost puts a lot of pressure on security, with theft being a prominent fear among owners.

A good lock is vital. “That’s your best insurance policy against theft,” Tritt advises. “There are actual insurance policies as well, of course, if people want to go that route.”

Right, you’ve decided to buy an e-bike. Where do you begin?

It can be overwhelming to walk into a store and be confronted with dozens of brands and models, but there are some key points to look out for.

“The first question to ask yourself is ‘how will I use it?’ Once you decide that, the bike will follow,” Tritt advises.

If you’re anything but a sports rider, Tritt suggests going with a step-through frame – a more upright frame without a crossbar. “The majority of e-bikes sold in New Zealand are step-through frames,” he says. “Because they’re easier to get on and off, and are more comfortable.”

Your next consideration is the motor system. For commuters, Tritt finds that the cheaper and less refined hub-drive is preferable, while leisure riders may enjoy the smoother and more expensive mid-drive.

It’s also important to make sure the bike, and its battery, are from a reputable brand with a verifiable history. A good battery should be rated for 500-800 charge cycles, meaning it will last through multiple years of regular use before starting to degrade.

“Most good manufacturers will have a supply of replacement batteries that you can buy, or if it’s within warranty you can replace them for free.”

But not all manufacturers have the same level of support.

“There’s a bit of a gold-rush mentality with e-bikes, and lots of people are jumping into the market. I’ve seen situations where places haven’t been able to follow through on the after-sale support.”

Once you’ve considered all those factors, you’ll have narrowed it down to just a few good options.

So, is an e-bike right for you?

If there’s one constant between owners, it’s that they love their e-bikes. “It’s not an exaggeration to say it’s been life changing,” says Kyle MacDonald. “Even in the middle of winter, I look forward to my rides home.”

“It makes the most mundane of trips feel fun,” says Jane Strange.

“Even if it’s dark out and raining, just being outside for longer each day has made me feel so much better,” says Amy Stewart.

Even amid frustrations over Auckland’s lacking cycling infrastructure, optimism reigns supreme. “Infrastructure has a massive impact on how enjoyable biking is,” says Stewart. “[But] when all the cycle path projects are completed, the commute will be bliss.”

But more convincing than words, says Michael Tritt, is trying one for yourself.

“There’s nothing like getting on the bike to understand it.”