Justin Giovannetti has all the details from today’s announcement of the government’s big plan for the future.

New Zealand now has a plan for reopening the country’s border as well as a major shakeup of the vaccination programme, but like so much during the age of Covid-19, there are a lot of details, caveats, exceptions and uncertainty.

The rollout of vaccines to eligible New Zealanders, currently everyone over the age of 16, was supposed to slowly continue in phases until October. That months-long rollout has now been compressed into three weeks. From September 1 everyone eligible will be able to book a jab.

People over 50 can book by tomorrow, then everyone over 40 by next Wednesday and the 30-and-above crowd the following Wednesday.

To allow for this wider rollout, the gap between first and second doses is being doubled from three weeks to six. That change was already implemented this morning before the news was officially announced.

While this was announced as part of the country’s border plan, the changes to vaccinations are tied to the looming threat of the delta variant. More jabs in arms, even just a single dose, could literally be a lifesaver if delta breaks out into the community.

Is there a risk spacing out the jabs?

The initial 21 day wait was based on Pfizer’s preliminary research last year. If you remember, things were a bit rushed at that time, so once the company found an effective gap between doses they slapped it on vaccines and starting shipping them out.

Emerging research indicates that a longer wait has no negative impact, it might actually create a stronger immune response. At an individual level, three weeks was good and six weeks might be marginally better.

At a national level, the expanded gap could mean hundreds of thousands of more people are protected faster. A single dose reduces your risk of hospitalisation by 71% if you’re exposed to Covid-19.

What about the children?

Medsafe approved the Pfizer jab for the 12- to 16-year-old group in June but the government hasn’t broadened vaccines to teens and children yet. That’s likely to change very soon. “Watch this space,” the director general of health teased today.

Once children are thrown into the mix, it’s unlikely they’ll be added as the last in line to get the jab. Instead, the government plans on allowing for family vaccinations, where parents and children go together. There could also be dedicated immunisation drives in schools.

Get to the good stuff. I’m double vaccinated, I’m in the UK and I want to come home. When can I do that without MIQ?

The border won’t be closed forever, the prime minister promised today, but reopening will be conservative and deliberate. For those overseas, it could be painfully slow.

In the first quarter of 2022, assuming that most New Zealanders get a vaccine and a new variant hasn’t upended the world’s response to Covid-19 (caveats), the government will begin phasing in three new “pathways” to enter the country.

If you’re vaccinated and coming from a low-risk country, you’ll be in pathway one. That’s what quarantine-free travel looked like with Australia before the most recent outbreak. You’ll need to provide a negative test, but can skip managed isolation. This category isn’t limited to New Zealanders, so a lot of tourism operator dreams rest here.

Before you get your hopes up, “low-risk” countries have not been defined, but seem to be largely limited to countries with elimination strategies that are more or less successful. China was used as an example. The government is working on a definition.

So what about the UK?

Pathway two will allow fully vaccinated travellers to come from medium-risk countries. After providing a negative test, those travellers will be expected to undergo some modified form of MIQ. Either a shorter stay, perhaps five days in MIQ, followed by self-isolation at home or somewhere you can stay alone and safe.

Sir David Skegg, who chaired the group that provided the government’s advice, said the UK could fit in this group of countries, assuming it gets transmission under control. At the moment, it’s more likely to be in group three.

The third pathway is high-risk countries or unvaccinated travellers. That’s the system we have now, with a full 14-day stay in MIQ, provided you can find a space.

There’s technically a four group, which is the very-high-risk countries. People from those dark red countries aren’t allowed to travel to New Zealand unless they are citizens.

The trans-Tasman bubble is dead. Australians or returnees from across the ditch will eventually have to find their way through the pathway system like people coming from every other country. There is, however, one distinction that’s possible with New Zealand’s closest neighbour, Australian states might be treated individually, assuming border controls are tight enough.

No decision has been made yet, but with the pandemic now ripping through New South Wales, Sydney is going to be off-limits for months to come. Air corridors could open to Western Australia and Tasmania this year, along with other states that generally have their acts together. But it’s likely going to be a long wait.

What if I’m in New Zealand and I need to leave?

Breaking with the advice of the Skegg report, the government is going to trial a self-isolation pilot later this year with a few hundred people. It’ll be a very limited group of citizens or permanent residents, who are fully vaccinated, going for a short trip overseas, to a destination approved by the government.

They will need to supply a rigorous self-quarantine plan to the ministry of health that requires them to stay completely isolated from family and food deliveries for 14 days. As an example of what’s being considered, someone living in a building with shared ventilation will likely be rejected.

They’ll also need to be headed overseas on a work project, with the endorsement of their employer. Oh, and if you break self-quarantine, the prime minister has promised to name and shame you and your employer.

Is it safe to reopen the border with these pathways and pilots?

New Zealand is going to be entering one of the riskiest phases of the pandemic in the next few months. There’s a pretty serious mismatch at the moment with what could be charitably described as complacency throughout the country. Mask use on public transit is plunging, even among bus drivers, and QR code scanning is at its lowest level in 2021. In many parts of New Zealand, it’s easy to forget Covid-19 exists.

The government’s approach to the pandemic has been wildly popular according to polls, in part, because it has allowed people to continue a pre-pandemic lifestyle. One way or another, that’s going to end soon. Because of the risk of the delta variant, snap level four lockdowns are now back on the table. Legal measures to enforce mask wearing and QR scanning are making their way through cabinet.

As the border slowly reopens, New Zealand’s lifestyle is going to start looking more like the rest of the world. That will mean a lot more mask wearing, more contact tracing and eventually, the domestic use of vaccine passports to enter many businesses. That last one not by legal order but business choice. The pandemic-free illusion is ending. 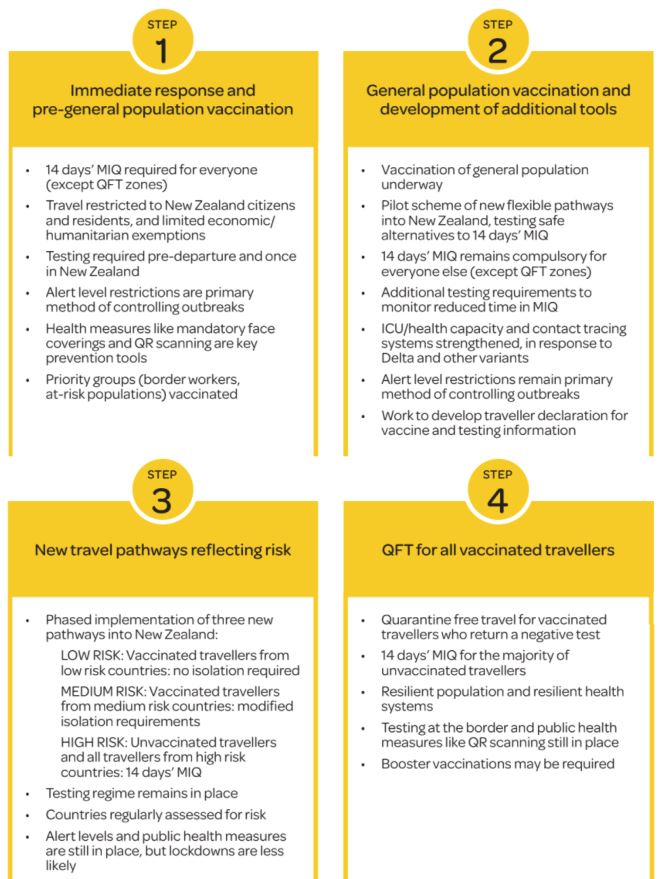