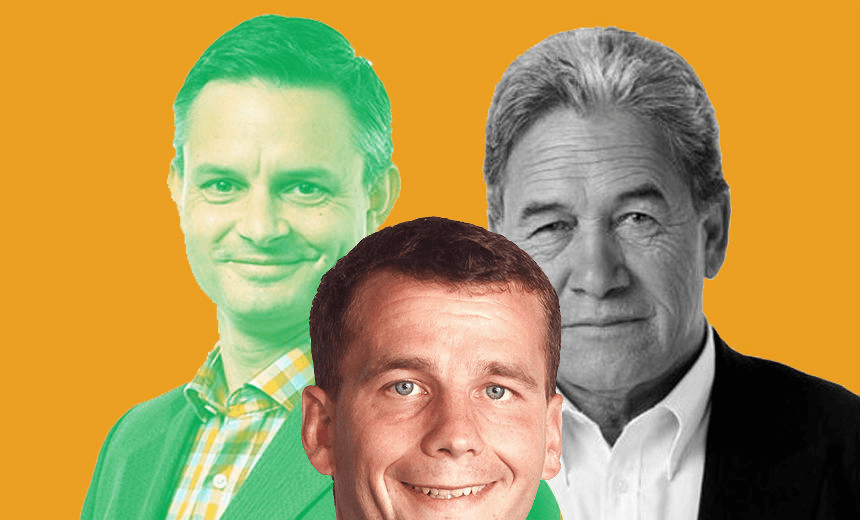 2017 produced the fewest parties in Parliament since the start of MMP. So what does history say it takes to get in? Stephen Beban crunches the numbers.

Mixed-Member Proportional (MMP) has been used in New Zealand since 1996. This electoral system was adopted by voters in a 1993 referendum in order to create more representative parliaments. MMP made our politics a multi-party system – as can be seen in Chris McDowall’s visual history of the New Zealand parliament. However, with just five parties in Parliament, the 2017 election produced the fewest winning ‘third parties’ ever:

The total party vote for third parties has fluctuated over time, yet it has always been a significant share. Over the eight elections we’ve had under MMP, an average of one in four voters have cast a vote for a party other than National or Labour. And just under 1 in 10 voters have supported parties that received less than 5% of the vote (although some of these parties did win an electorate seat, thus gaining entry to Parliament).

Other than the two major parties, eight distinct parties have won seats, in one election or another – either via an electoral seat, or getting over the 5% threshold. Let’s take a look at these third parties and the circumstances that saw them gain entry to Parliament. There are only three other parties that received at least 2% of the party vote without winning a seat in Parliament, whom we’ll include for this analysis.

NZ First was formed by Tauranga MP Winston Peters. He had left the National Party and won re-election to his electorate in a 1993 by-election. In 1996 he retained his Tauranga seat, and NZ First candidates won all five of the Māori seats. Peters lost his electorate seat in 2005, but his party won enough votes to get back into Parliament every election since then except for 2008.

The Greens stood for the first time in the 1990 election, gaining 6.9% – behind only National and Labour. They joined the Alliance for the 1993 and 1996 elections, with three Green MPs winning a seat as part of Alliance’s list MPs. They decided to stand on their own in 1999, managing to not only exceed 5%, but with then-List MP Jeanette Fitzsimons winning the Coromandel electorate. They are the only third party to have won at least 5% in every election that it has contested in the MMP era.

Two former MPs, Derek Quigley (National MP for Rangiora) and Roger Douglas (Labour MP for Manurewa) created ACT, and were joined by former MP Richard Prebble (Labour MP for Auckland Central). Prebble won the Wellington Central electorate in 1996, but ACT won more than 5% up until 2002. From 2005 onwards, ACT has relied on the Epsom electorate, first won by Rodney Hide.

Te Tai Hauauru MP Tariana Turia left the Labour Party to form the Māori Party, whose banner she won under in a 2004 by-election. Despite winning less than 5% of the vote, Māori Party candidates won four of the Māori electorates in 2005. They continued to hold electorate seats until the 2017 election, when Te Ururoa Flavell lost Waiāriki in an upset.

Peter Dunne, MP for Onslow (which later formed part of Ōhāriu), left the Labour Party to create Future New Zealand in 1994, renamed to United New Zealand before the 1996 election. They were unable to gain enough votes to bring in any List MPs but held onto Dunne’s seat. A separate Future New Zealand party (formed after Dunne’s original Future New Zealand) merged with United to form United Future in 2000. However, Dunne’s retirement left them outside Parliament in 2017.

Māori Party MP Hone Harawira, who had won Te Tai Tokerau in 2005, formed Mana in 2011, and was re-elected in his electorate for that election. He merged Mana with the Internet Party, and stood again in 2014, but lost a close election in his electorate. Internet and Mana separated, and Harawira unsuccessfully contested Te Tai Tokerau again in 2017.

Sydenham MP Jim Anderton was original elected as a member of the Labour Party. He had maintained his hold on this electorate seat by the time he helped form the Alliance in 1991. They won two seats in 1993 – Anderton’s, and Auckland Central with Sandra Lee-Vercoe. With the advent of MMP in 1996, Anderton was the only Alliance MP to win an electorate seat (retaining his electorate, now renamed Wigram). They were the second-largest third party behind NZ First in 1996, and largest third party in 1999, until fracturing prior to the 2002 election.

Former Labour MP Jim Anderton had been a founder of the Alliance in 1991. However, conflict between different factions saw the newly-named Progressive Party split from the Alliance before the 2002 election, following the Greens’ departure the prior election. Anderton continued to hold his Wigram seat, but with his departure from Parliament the party disbanded.

Colin Craig formed the Conservative Party, after having contested the 2010 Auckland Mayoral election, and coming in third with 8.7% of the vote. Conservatives failed to clear the 5% threshold or win an electorate seat.

The Opportunities Party: Formed in 2016

Gareth Morgan’s TOP was the largest party outside of Parliament in the latest election. However, their 2.4% fell below the 5% threshold.

Formed before MMP, Christian Heritage was the largest party outside of Parliament from 1993-2002. For the 1996 election, they merged with the Christian Democrats and stood as the ‘Christian Coalition.’ The Christian Democrats had been created by former National Party MP Graeme Lee from the Matakana electorate (which become part of the Coromandel electorate in 1996). Lee did not run for re-election in his new electorate, and after failing to get 5% as the Christian Coalition, the two constituent parties broke apart once again. Their 4.3% is the highest a party outside of Parliament has received under MMP.

Putting these together (and grouping parties that split off from another) gives us the following table and chart (NB: lighter shades indicate a party won an electorate seat but otherwise fell below the 5% threshold):

1. Pre-existing MP support has proven to be a nigh-required condition for winning election into parliament. Every third party that has done so relied on either an electorate MP defecting to form the party, or the party was founded with a strong Parliamentary background (as was the case with list MPs for the Greens and former MPs for ACT).

2. Only two of the eight third parties that made it into Parliament have regularly received more than 5% (in other words, in more than half of the MMP elections they have stood for): Greens and NZ First.

3. Third parties that have failed to crack 5%, or fell below that threshold without recovering by the next election, have all declined over time. This includes even those that have retained a seat in Parliament via an electorate MP.

The 11 aforementioned parties have collectively attempted to enter (or return to) Parliament 57 times under MMP, and have successfully passed the 5% threshold only 19 times (33.3%). Greens and NZ First are responsible for two-thirds of those instances (13 of 19), with the rest of the parties more often relying on electorate victories (45.2% of the time, or 19 of 42 attempts). Even then, 18 of the 57 attempts (31.6%) from this group have been unsuccessful on both counts.

MMP makes it so that parties winning an electorate are eligible for list MPs from the party vote, even if they otherwise have not met the 5% threshold (the 1-seat rule). However, voters appear to treat the threshold as a measure of viability. Below this, the risk of a third party losing their seat seems to deter voters: if the party’s electorate is lost, a party vote for them will be wasted. This may be a recognition that winning electorate seats are a tenuous position for third parties, as they depend on the candidate winning cross-over support from voters of different parties.

Eight elections is a small sample size to draw strong statistical conclusions from. Still, the difficulty of getting into parliament, and of sustaining their support if they can’t crack 5%, helps explain why 2017 saw the fewest third parties ever under MMP.