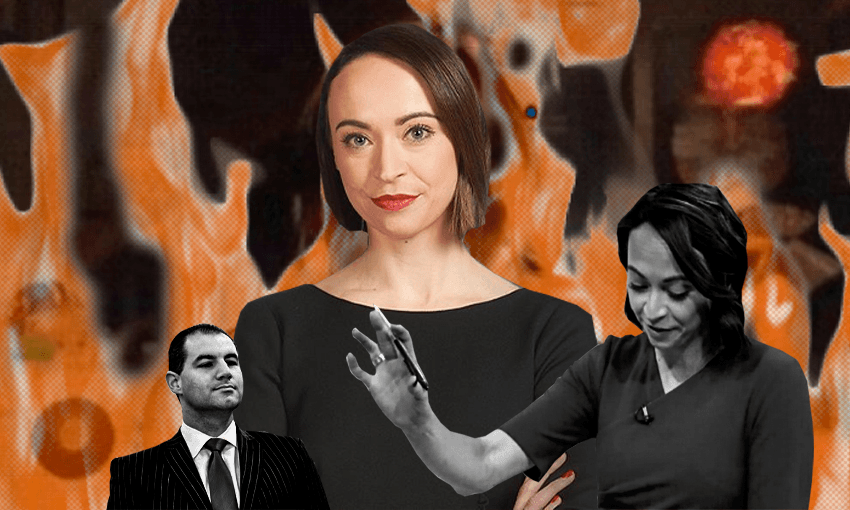 Tova O’Brien v Jami-Lee Ross: the ex-MP just got Tova’d and the world is loving it

Misinformation superspreader Jami-Lee Ross strolled in to the Newshub Nation studio on Sunday where he was eviscerated by a political editor at the top of her game. Here are the highlights from an exchange that has gone globally viral overnight.

The footage has been retweeted by everyone from CNN’s Jake Tapper, to comedian Patton Oswalt, and even Donald Trump’s niece. It’s been watched now by almost seven million on Twitter alone – and counting.

Speaking to The Spinoff, O’Brien says she didn’t have much of a strategy going into the interview.

“I’d not given it too much thought to be honest. I’d been rolling with each day as it came during the campaign and had been on air with our election special until midnight, so it was only when I came back into work at 6.30ish that I learned we had him on,” she says.

“The Nation team had prepared some great questions but when he sat down and told me to be nice to him I pretty well set them aside. I wanted to give him a chance to reflect on his political career, the choices he made and the people he hurt.”

Despite Jake Tapper’s glowing endorsement, O’Brien says she has no plans to move to the US. “I’m a big CNN fan but am currently living my dream job.”

This is @TovaOBrien and she has some fans in the US !!! https://t.co/QpUqyovBfZ

Imagine if the smirking, QAnon/“plandemic”/alt-right RNC lampreys who attached themselves to Trump’s chin-wattle got these questions from @TovaOBrien. You don’t get to wriggle away and have a cushy post-career. “We’re probably never having you on again so here’s your chance.” 💯 https://t.co/Ew4fBqQiZs

While New Zealanders are used to seeing O’Brien go toe-to-toe with lawmakers, the video is resonating with Americans aghast at the sight of public figures from the president down disseminating misinformation.

Since the video made global news, O’Brien’s follower count on Twitter is continuing to skyrocket – rising thousands since this morning.

Whoa! That’s quite something to wake up to

O’Brien says while she’d received positive feedback from friends and colleagues about the interview after it went to air, she didn’t have much time to think about it.

“I was happy with how it went – which I don’t often say! – but it was a busy day so I’d leapt onto the next thing by the time it started going ‘feral’ as our former bureau chief Gordon ‘Flash’ McBride would say (he meant viral).”

Here’s some of the highlights from O’Brien v Ross.

1. ‘You just described yourself as a loser’

We’re straight out the gate and Tova comes out swinging. “You are out of National, out of parliament, out of Botany, your political career is in tatters,” she tells Ross, who is sitting less than a metre away.

2. ‘You were part of a political movement that’s been peddling misinformation’

Ross has always tried to justify his involvement with the Public Party (the conspiracy theory-adjacent party that joined forces with Advance NZ), effectively saying he was simply asking questions about the government’s ability to lock down the country, rather than encouraging people to put their health at risk by hosting anti-lockdown rallies in our biggest city.

In the interview, Tova makes this face which I’m pretty sure is how I looked when someone told me thousands were marching down Queen Street during a pandemic.

3. ‘Why did you get into bed with Billy Te Kahika?’

4. ‘You sold your soul for political ambition’

Ross denied selling his soul for political ambition, just moments after admitting he joined forces with Billy TK after seeing “a lot of growth on social media”.

“I could see that there were people out there asking questions about things that I believe in too, about freedom and sovereignty for New Zealand,” he says.

5. ‘You were whipping up fear and hysteria among vulnerable communities’

This was framed more as a statement, rather than a question. I don’t have much more to add.

After Ross tries to sneak in a remark about how the death rate from the seasonal flu is higher than Covid-19, O’Brien tells him to talk to the hand. “I don’t wanna hear it.”

Ross says he should get a fair chance to explain his reasoning, and O’Brien cannot just shut him down.

“If you’re gonna come on the show and say things that are just factually inaccurate I can do that actually,” she says.

7. ‘This might be last time that you’re on air’

“It’s probably the last time we’ll invite you on.”

Ross takes his last opportunity to make apologies on national TV to not make any apologies.

The interview manages to fit a lot into a snug four minutes and ends on a high note. O’Brien questions Ross on why he dropped out of the race for Botany, after previously claiming he could win it after leaving the National Party.

O’Brien: “It did seem like a kind of narcissistic belief that you could win the seat that was obviously going to go to Christopher Luxon.”

Ross: “You’re just rolling out all the terms, aren’t you Tova.”

Ross: “I wanted to focus on the nationwide campaign with Advance NZ… had I stayed in Botany, I probably would’ve taken so much vote off Luxon that Labour would’ve won the seat. So I guess my final gift to National –”

Ross: “… was giving them Christoper Luxon.”

And with that, the curtain closes on Jami-Lee Ross’ political career. What a nightmare.