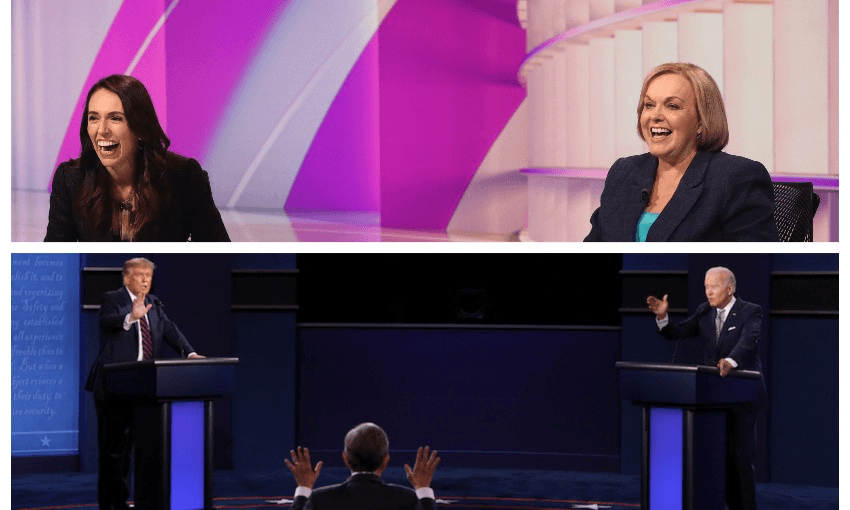 Looking at New Zealand through the lens of the US

With calamitous US politics stoking fear and division in an already fraught nation, the New Zealand election makes for a calm and refreshing change.

The front page of the New York Times today reads: “A Regulatory Rush by Federal Agencies to Secure Trump’s Legacy,” referring to the mad rush to pass Trumpian legislation before the end of the term.

On television, Fox News leads with “Hearing Footsteps: Biden campaign warns against complacency in memo: ‘Donald Trump can still win this’ ” next to a doomsday clock counting down to election day.

Meanwhile, CNN has gone for dual headlines, with equal sized titles blaring out “These 10 states reported their highest number of new coronavirus cases on Friday,” next to another which says “The legal reckoning awaiting Donald Trump if he loses the election”. Double whammy.

I can go on and on. But this is a simple snapshot of America in the final two weeks leading up to the most impactful American election in modern history. It has been this way for much of the last year, but the polarisation, fear mongering, and mudslinging is ratcheted up to the extreme depending on where you live and how you get your information.

Seeing this election cycle play out is like a train wreck in slow motion, where the rails are being bent and warped by the triple forces of climate induced weather extremes, a pandemic, and an historic economic recession all at once.

I moved to Washington DC in August of last year, and every day has been like this, or worse. Imagine living in this pressure cooker for years with no end in sight. No wonder voter turnout is near record lows, and political engagement is falling off a cliff. Americans are worn out by the entire political process. It is crushingly tiresome, with Democratic nominee Joe Biden’s campaign now 400 days long! It is rife with scandal, real and imagined. And in the world’s most advanced democracy, the active use of voter suppression measures, much of the process is downright illegal.

It is easy to bash America and forget how incredibly large, complex, and young the country is. After all, this country is an experiment between 50 different states and 330 million people, each with their own distinct demographics, history, and identity. But it is also clear that much of the polarisation, the political and legal structures, and rampant misinformation is also an instrument of America’s own making.

I do not think a Biden victory will be the cure-all to America’s many illnesses. A vehement and vocal faction of Trump’s Republican Party will be around for many election cycles. And traditional Republicans will need to find their way in the post-Trump years, because right now, they are sycophants to the cult of Trumpism. For the Democrats, a centrist-minded Biden White House will need to contend with the influential far-left faction of his party. American politics will get much uglier before it gets better.

When I attended my first Thanksgiving with some American friends, the only rule was “do not discuss politics”. That went without saying, as it was clear how divided the country had become. I had heard stories of how some of my classmates do not bring up politics and are not mutual friends with their family members because of their political affiliations.

Meanwhile during the lockdown, on virtual hangouts with my family and friends back in New Zealand, we all talked eagerly about the different policies heading into the election, and the fortunes and misfortunes of the different parties. We all had different leanings, but we could discuss the issues without fearing someone would throw their wine glass at the screen.  Watching the New Zealand election campaign, filled with substance, humour, and conducted in good faith, it made me realise how precious that is. Although the US is presently an example of how not to conduct politics, we have seen that in many countries, developed and developing, how election cycles can stoke the fires of tribalism, dividing the electorate into economic and ethnic divisions. In that maelstrom, much of the substantive policy is lost. This weekend, New Zealand has set an example for the world, showing that politics does not have to be so divisive,  where – in the words of the Prime Minister – we don’t tear one another apart. Living far away from home, the contrast between New Zealand and the rest of the world is remarkable. I am one of the few people in the US right now that if told to “go back to your own country” my response would be “gladly!”

But that is not to say that New Zealand is immune to the same elements of conspiracy, division, and dog-whistles. More than 55,000 voters cast ballots in favour of Advance New Zealand and the New Conservatives (almost equal to New Zealand First). As we move on from this election, it is important to keep those voters and their views in mind, because if cast adrift, those sentiments can easily metastasise into what ails America, and much of the world.

So regardless of who you voted for in this election, and how your party did overall, the key takeaway is that we have it damned good in New Zealand, and it’s on us to keep it that way.