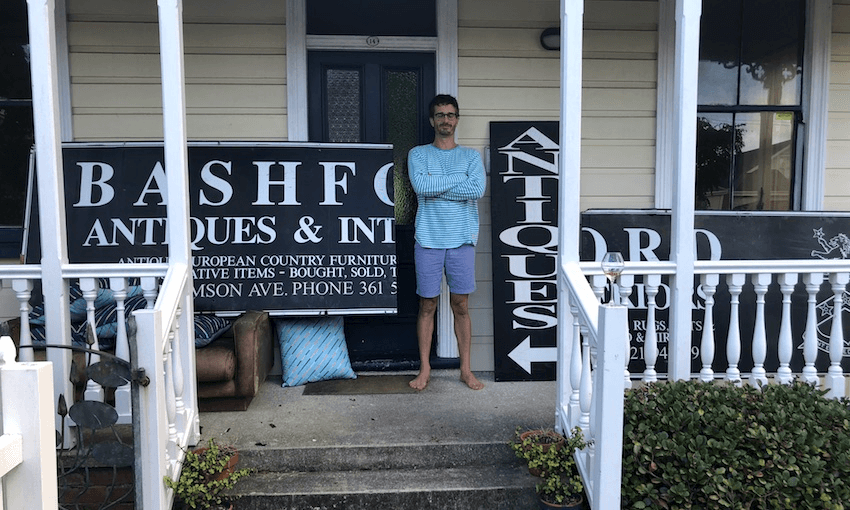 Bashford Antiques, Part VI: Of Course This Would Happen – the state clamps down

David Farrier has been writing about clamping enthusiast Michael Organ for nearly three years. In this latest installment, the logical thing finally happens: the New Zealand government rolls up its sleeves and changes the law.

Catch up with the extraordinary saga of the clamp-happy Bashford Antiques: Parts I to V are here

“New rules to clamp down on overzealous wheel clamping and extortionate fees charged in order to release a vehicle have passed their final stage in parliament,” the press release announced.

The Land Transport (Wheel Clamping) Amendment Bill has passed its third reading and will become law, capping clamping fees at $100.

It is, perhaps, Michael Organ’s worst nightmare: a hellscape of his own making.

Earlier this year, I watched various readings of the bill on Parliament TV. I was on the edge of my seat, as various members of parliament weighed in. To be honest, there wasn’t much debate. Consumer affairs minister Kris Faafoi’s proposed changes to the bill that weren’t exactly controversial.

And while this bill took into account all rogue clamping in New Zealand, it was clear to me what this was really about.

Throughout the various readings, many politicians alluded to the clamp-obsessed man I’d outed as Michael Organ back in 2016. While many clampers in New Zealand had taken the piss in the past, Michael Organ took things to a whole new level, culminating in a record-setting clamping fee of $760 for half an hour parking.

New Zealand’s minister of defence, Ron Mark, was clearly aware of Organ – who strongly denies any wrongdoing – when he spoke back in April. “We’ve noted the distress felt families as they’ve come back to find not only their vehicle clamped, but be fronted with a bill of, in some cases, $750. Which seems to us to be quite outrageous.”

Clampers had “inflicted harm on citizens”, he concluded.

That harm was both financial and mental. When I spoke to the victims back in October 2017, they told me they’d felt left with no alternative but to call the police.

“We couldn’t deal with him. The manipulative way he talks is just … it’s chilling,” Sharn and Jamie told me. Of course, the law being the law, the police could do nothing about it – and so Sharn and Jamie paid up.

The mind boggles at how much Michael Organ would have made with this clamping business, often hitting multiple cars each night with escalating fees. He boasted openly about how many cars he’d clamped, and multiple victims told me he never accepted payments over Eftpos or Visa – it was always cash.

But it appears eventually someone did take notice. The New Zealand government.

Earlier this month, as the The Land Transport (Wheel Clamping) Amendment Bill edged closer to passing, Labour’s Paul Eagle told parliament about “an article around why unregulated wheel clamping is still a lucrative hobby. That was a story that talked about… the $760 for half an hour of illicit car parking.

“Not only that but the car clamping company was hiding in plain sight as a second hand shop, Bashford Antiques”.

And now the bill has passed. Wheel clamping charges will be capped at $100.

Michael Organ will no longer be able to demand $760 for half an hour parking, and he won’t be allowed to hold his victims’ property hostage for hours on end. What he will do is, I guess, feel very sad.

“Other changes require a wheel clamping operator to release a person’s vehicle within a reasonable period after a request to do so,” Minister Faafoi said.

If Organ and other rogue clampers starts clamping again, the police are now able to get involved too, because they have a law they can now enforce. “Wheel clamping operators who charge more than the $100 maximum fee or who fail to remove a wheel clamp in a reasonable period of time will be committing an offence,” Faafoi concluded.

So, that’s the end of that then. It’s all over. Six parts too many.

If you have your own story to share related to this saga, you can reach the author at david@davidfarrier.com