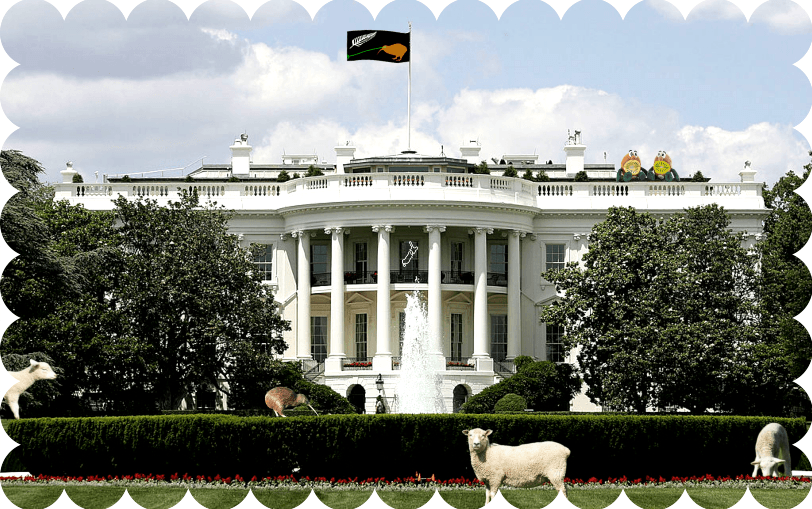 The land of the long white house. Photo by Alex Wong/Getty Images; collage by Jason Stretch

The land of the long white house. Photo by Alex Wong/Getty Images; collage by Jason Stretch

Ahead of the meeting with President Biden, a former New Zealand prime minister tells Toby Manhire what she learned from her two Oval Office encounters, and why the priority must be preventing the world from splitting into ‘two hostile camps’.

A meeting with President Joe Biden was only inked into Jacinda Ardern’s diary a few days after she’d arrived in America, but there will be nothing impromptu about the encounter itself. The 26th official visit by a New Zealand prime minister to the White House, scheduled for late Tuesday morning in Washington DC (around 3am on Wednesday in New Zealand), will be “highly choreographed”, former prime minister Helen Clark told The Spinoff. “You don’t wing these meetings. It’s not an informal chat.”

Clark knows what she’s talking about. In March 2002, in the shadow of 9/11, she met President George W Bush in the Oval Office – a meeting repeated five years later. As is typical with New Zealand prime ministers, she stayed at Blair House, otherwise known as “the president’s guest house”, which sits just across Pennsylvania Avenue from the White House. (The exception is Peter Fraser, who in 1942 was given a bedroom in the White House itself.) By the time she was ushered into the Oval Office, the key people had a good idea of what was about to be discussed.

The visiting New Zealand prime minister could expect the embassy in Washington DC to “have a clear readout of what the president is likely to say”, said Clark. “They’ll have a line to someone in the White House, and the New Zealand side will have signalled what New Zealand is going to say.” A smattering of small talk out of the way, the prime minister would move straight to the prepared lines. Any attempt to improvise “could lead to making commitments which stray from New Zealand’s core interests”, said Clark. “What one says needs to be well scripted in advance to be of maximum value to New Zealand.”

Discipline and “focused preparation” was critical because of the small window of time. The meeting and the photo-op that followed it would probably need to wind up within half an hour or 45 minutes, reckoned Clark. “It’s got to be bang, bang, bang. You need to be going in and making your points.”

That preparation would extend to picking what the other guy will say. New Zealand officials would prepare Ardern by throwing the expected Biden talking points at her, so that by the time the meeting gets under way she had “prepared considered responses to them … so there are no surprises”.

A core theme of bilateral discussions during Clark’s visits was rebuilding a relationship that had remained strained since New Zealand was “put in the dogbox” and suspended from Anzus over the decision to go nuclear-free during the Lange government. Her task had been to put the countries back “on a more professional footing”.

As Biden and Ardern meet, the place of the Pacific in a tussle between the US and China for economic and geopolitical influence is in the headlines. The New Zealand prime minister could add “nuance” to a delicate international balance that risked slipping into a binary west versus the rest mentality, said Clark. With Russia having “made itself a pariah state” through its invasion of Ukraine, the danger was in beginning to “treat China in the same way”. It was “in New Zealand’s interests, and the interests of western countries in general” to avoid “acting in a way that leads to a division into camps – then we’d really have problems”.

As China’s foreign minister tours the Pacific Islands signing deals and Biden breaks with the “strategic ambiguity” stance to pledge the US would intervene militarily should Beijing move aggressively against Taiwan, the challenge for Ardern was to show solidarity with the US while remaining a friend to Beijing – to “bring the context and nuance of how you engage with China”.

Ardern is expected to reiterate in her meeting with Biden New Zealand’s enthusiasm for the United States to join the CPTPP – the trade deal formerly known as the TPP – which American negotiators were instrumental in negotiating before Donald Trump withdrew as one of his first acts as president. Despite the domestic politics that made it unpalatable and Biden’s pursuit instead of the Indo-Pacific Economic Framework, Ardern needed to firmly make the case for the Comprehensive and Progressive Agreement for Trans-Pacific Partnership, for greater access to US markets for exporters. “New Zealand can be pretty blunt in saying that,” said Clark.

There was likely to be some engagement on gun law reform, an issue which dominated the early days of Ardern’s visit as the US recoiled from yet another mass shooting in a school. But with the politics in Congress paralysed, the reality was that “Biden, like Obama before him, is absolutely stymied, so the outrage will go on”, said Clark.

The turnout for the meeting from the president’s cabinet could offer a clue as to the importance of the meeting from the US point of view, said Clark. Kamala Harris’s attendance has already been signalled – the others that would make up a “full bench” are secretary of state Antony Blinken, national security adviser Jake Sullivan and defense secretary Lloyd Austin.

In his study of New Zealand prime ministers’ White House trips, foreign policy analyst Ken Ross has suggested they are essentially about “diplomatic chemistry”. John Key, the most recent prime minister to visis the Oval Office (in 2011 and 2014) has observed that the most important meetings for building a relationship with a US president tend to come on the sidelines of multilateral summits.

But Clark, echoing Key, says White House are “critical” beyond the ceremony and symbolism. “It matters because New Zealand has interests. And we would like the US to be more open to New Zealand than it has been. We have interests and we need to register them and show we’re across the geopolitics, to re-engage that diplomatic toolbox.” Today, with international institutions fragile and stability strained, New Zealand needed to seek out “the issues-based coalitions that enable us to work as an international community”, she said. “Across climate, oceans, biodiversity and pandemic response – the world would grind to a halt if driven into two hostile camps.”