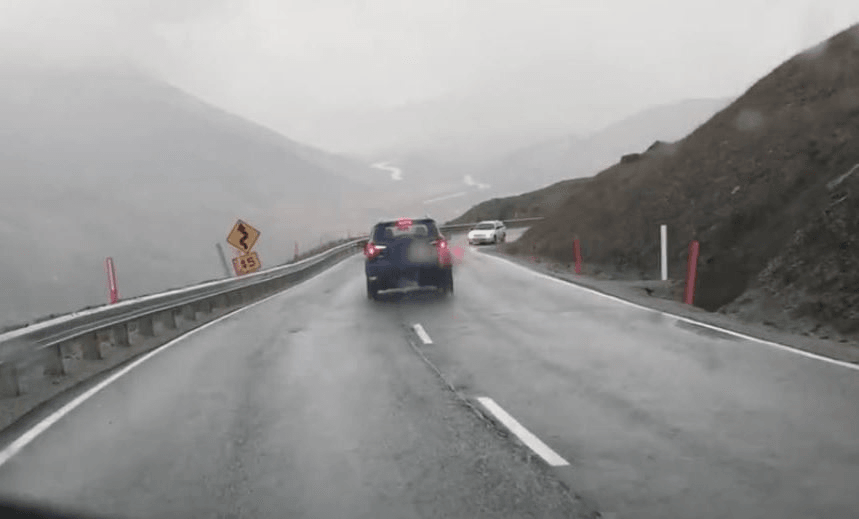 Driving in Queenstown has become a kind of Russian roulette. Platitudes about ‘education’ won’t cut it: we need a tourist licence requirement, and urgently, argues Peter Newport.

The ability of Governments to ignore reality is fairly well established but the deaths and chaos around Queenstown being caused by overseas drivers has to stop.

I was in a meeting this morning where one person said he’d had to dial the police on their *555 number 12 times last year – and three times the police had taken the keys off the overseas driver and cancelled their rental contract.

My own experience is similar and it is repeated every day among the people who live in Queenstown. Local Facebook pages like Queenstown Whinge (8,400 members) and Queenstown Trading (22,000 members) are peppered every day with dashcam videos of near misses, serious accidents or acts of gross incompetence by tourist drivers.

Just a couple of months ago I had to call *555 when I saw a rental car being driven on the main road out of Queenstown at just 10 kph, literally scraping along the kerb. The driver was clearly scared out of their wits and had no control over the car, let alone the subtleties of indicator lights or driving on the correct side of the road.

The cops were great. They got there in just 5 minutes, and the driver communicated words to the effect of  “Thank God you’ve arrived. I can’t drive a car.” Needless to say keys were surrendered and the rental contract voided.

But this is happening hundreds of time each year. Driving in and around Queenstown now is like a game of Russian roulette. We are ready, as locals, to take evasive action within seconds to avoid an accident that seems to be waiting around every corner. The Glenorchy to Queenstown Road is rarely silent, the call of native birds in the beech forest replaced by the virtually incessant scream of emergency sirens as police, ambulance and fire appliances attend an unbroken string of serious accidents where cars are on the wrong side of the road, or sometimes often just parked in the middle of the road to take photos until they get smashed into by another tourist or an unwary local.

These accidents and deaths just can’t continue. The statistics are irrelevant. It does not matter if it is “only” 20 or 30 or 40 Kiwis killed by overseas drivers every year. We live here and we have a right for our roads to be safe, properly policed and regulated.

Local cameraman Damon Forde has just seen his video of a driver driving on the wrong side of the Crown Road go viral with over 200,000 views, but Transport Minister Simon Bridges has refused Forde’s invitation to experience Queenstown’s lethal road conditions first hand.

The Minister could perhaps use his time even more effectively by spending half an hour looking through the Queenstown Court records. Every court sitting is congested with an apparently endless line of overseas drivers, all with a similar tale of woe. They have often been involved in serious accidents, some even fatal.

One I remember clearly from just a few weeks ago was a driver arrested after an accident on the Te Anau to Lumsden road. He was driving straddled across as the dotted centre line, using it as a “guide” because he felt “uncomfortable with the narrowness of New Zealand roads”. I’ve heard and read the same story over and over again. The drivers admit they are scared and under confident. Having their keys confiscated is often a relief and they’ve said exactly that to police in numerous court cases.

For god’s sake. A kindergarten student could figure out how overseas drivers, wherever in the world they are from, would find the roads of Central Otago, Fiordland and the McKenzie Basin extremely challenging. They are narrow, steep and winding, and there are limited opportunities to overtake. Add to that the factors of jet lag, driving often on a different side of the road, the limited experience of many overseas drivers who might only have ever driven on multi-lane, flat expressways, and an unfamiliar rental vehicle – and you get a cocktail which is lethal.

Even the Cook Islands could figure out an answer to this problem: a Tourist Licence. The requirement has recently been diluted so that some countries are exempt – but still the idea is simple and self funding. And, OK, in the Cook Islands the idea was badly executed with long queues and arbitrary requirements around a practical test.

But done properly a Tourist Licence with a short practical test for South Island rental cars would work well and pay for itself via a $150 fee. It might also be a good idea to take a credit card security deposit of $1,000 against unpaid traffic fines which notoriously don’t get paid by departing tourists. Forget the arguments that this might not be seen as fair. Is it fair that New Zealanders are being killed by drivers who freely admit they don’t feel confident on our roads?

From the interviews with convicted overseas drivers, and media reports of their reactions when challenged by angry locals, many overseas drivers don’t want to drive here anyway. I’ve seen them myself. Frightened, uncertain of the road rules, intimidated by the reaction of angry local drivers – it hardly adds up to the happy relaxed holiday that Tourism New Zealand likes to promote around the world.

Let’s give them options. Big buses, small buses, cars with Kiwi drivers – all are good solutions. A 24 hour wait to get the $150 Tourist Licence at South Island airports would also help address the jet lag issue as well as impressing on our visitors that we not only take road safety seriously, but that driving through our scenery is a privilege which needs to be valued and protected.

To do nothing, or just keep issuing platitudes around “education”, is really the equivalent of giving a loaded gun to someone who often does not want the gun in the first place.

Instead we hand out rental cars like bright shiny toys believing that it is all adding to our tourist economy. Bullshit, I say – it’s killing Kiwis and putting many tourists into a situation that scares the living daylights out of them.

Let’s stop this madness and bring in a $150 Tourist Licence at South Island airports with minimal delay. New Zealand is already the sixth worse nation in the world for preventable deaths. Here’s something we can do immediately that will save lives and win approval around the world.