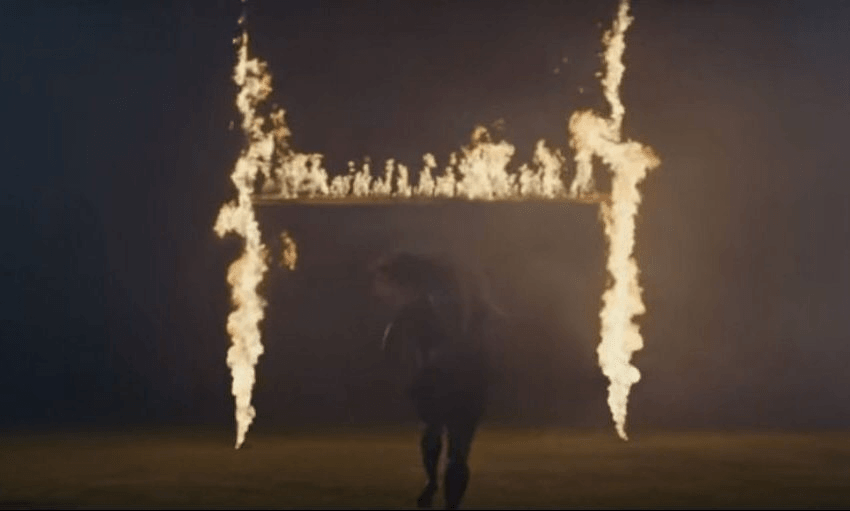 By Sarah Paterson-Hamlin
Guest writer
Made possible by

Rebecca Wood is a force of nature in a striking new Rebel Sport commercial. But ‘how many lives you live is up to you’? Nah, not for female rugby players.

There’s a lot to like about Rebel Sport’s latest foray into the world of selling stuff.

A powerful Black Fern is seen charging through a dark, eerie landscape, lit only by the burning of a house fire. She looks strong, determined, and beautiful. The only sound is her breathing and the crackling of the flames.  She clears the smoky doorway and continues through obstacles ranging from flaming beams crashing around her to the surreal presence of opposition team members who coming at her from all angles. Finally, she clears both the burning house and the opposition to charge towards the goalposts, also illuminated in fire. It’s at this stage that the ball disappears, replaced by a small child in a nightdress. The dramatic final titles emerge on the screen:

How many lives you live is up to you.

It’s well-made, it’s inspiring, it features a female sports player as the only protagonist, it’s awesome. Except – that last line: how many lives she leads really isn’t up to her.

Rebecca Wood is a typical Black Fern. She is an elite sportswoman who has been part of the world champion national team since 2017, and a star player for East Coast Bays and North Harbour for three years before that. She has seven test caps so far, and yes, she is also a firefighter. She’s a total legend. But the number of lives she leads is not up to her. At least, not in the same way it would be if she had the same credentials in a male team.

Last year, the year they won the World Cup, the absolute most a Black Fern could hope to earn was $18,000. That’s just over half our minimum wage for 2017. Meanwhile, the All Blacks’ largest pay packets are over $1 million, and that’s before they get paid large sums for awkwardly standing and reading an endorsement for garages or get filmed tackling random Japanese pedestrians.

This year, a major new agreement was reached, meaning that Black Ferns can now receive annual retainers in the vicinity of $15,000-$30,000. This is a major development, and indicates a potential shift away from the current situation in which little boys can have “All Black” as a genuine career option, but little girls who say they want to be professional sports players have to be told “That’s awesome Rachel, but make sure you finish your homework because you’re going to have to be a lawyer or something as well.” But even with this seismic shift in how we pay our female rugby players, they are still earning well below minimum wage, and still can’t make rugby a full-time job.

To put this “landmark” in context, male Super Rugby players with a similar number of caps to Rebecca Wood can already earn nearly $100,000. Six-figure salaries are the standard for All Blacks. If the captains of the national teams were your PE teachers, Mr Read would be earning about $1,800 per fortnight from which he could pay the rent on his suburban Christchurch semi-detached, pay his household expenses, save for a trip to Australia every now and again and still have some left over for some Friday beers. Ms Fa’amausili on the other hand, would take home $54.28 per week, which should be enough for some muesli bars and perhaps a nice rug from Kmart to furnish her cardboard box.

The reality remains that the number of lives our female sportspeople lead is not up to them. They must maintain a professional career alongside their national squad places in order to earn minimum wage. They must do at least as well as their male equivalents in order to gain mana in our national consciousness, while having access to a tiny fraction of the time and resources required to train, squeezing their rugby careers in around their day jobs.

It’s inspiring to see a woman like Rebecca Wood being admired for this incredible feat of multi-tasking. But it has the unfortunate side effect of normalising and indeed celebrating this enormous double standard in so many of our industries, not least this most public of professions.