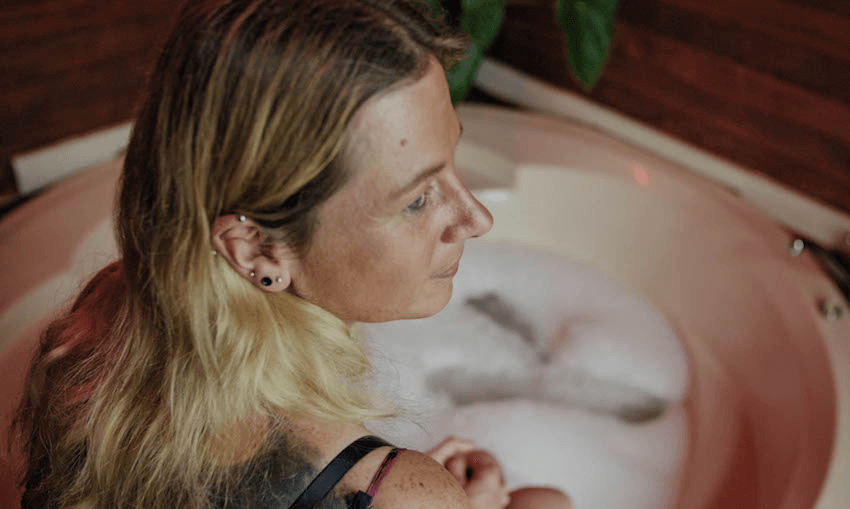 Life with the hookers of Hawera

The Spinoff is proud to debut our Frame documentary series produced by Wrestler and funded by NZ on Air. The first is The Hookers of Hawera, about life in and around a small-town brothel named ‘Shh…’. Co-director Kim Vinnell explains how she came to the story, and what she learned along the way.

When I first met Nicky years ago, we clicked. She, the tattooed former prostitute-turned-madam, living in a town most would call a pit stop. Me, the TV reporter with a fascination for brothels, dropping into her world for a few days. Over cigarettes and coffee, we talked mostly about sex. A firm friendship was born.

A week earlier, the local paper had published a small write up on what I thought was a curious story. Shh…, a brothel, was raising money for a charity to help feed poor kids. The conservatives of Hawera were not happy. A good TV tale, I thought.

But arriving in the tiny town on the Taranaki coast, I realised quickly just how wrong I was. Most people employed a ‘don’t ask don’t tell’ policy when it came to Shh… and what happened in their rooms next to the hairdresser and the dentist on Union Street. They didn’t mind the hookers at all. The majority of the attacks came from screen warriors – who would never get out from behind their computers to do anything of consequence anyway.

We did the TV thing, filed the story, and flew back to Auckland. But these women stuck with me. Their worldly intelligence, their patience with my naivety. I learned ways to use sponges which had never (and would never) have crossed my mind.

But more importantly, they had really lived. Some people glide through life, never really touching the sharp edges that come with highs and lows. But not these women. They had brokenness and redemption, loyalty and love – the stuff movies should be made of.

So, three years later, I came back.

These days, Nicky’s business is struggling. She’s competing with freelancers who undercut her girls, and girls who try to take clients to do the undercutting with. She hasn’t paid herself in six months and is barely covering the rent. She says she stays open for the girls and the clients, and by the way she says it, I believe her. She’s juggling two kids, full time study to become a health and safety advisor, and does crossfit five mornings a week. The brothel is becoming more of a charity project than a business, I think.

Nicky is candid about her own time as a working girl, in the very same brothel under a different owner some years ago. She did it for the cash, and happened to meet her husband in the process. Some people land on their feet.

The working girls these days are very upfront about what’s on the menu, and what’s not. Greek for Tilly, not for Anne. Bi double for Harmony, and Anne, but not for Amy. Lydia is open to pretty much anything. You’d have to be comfortable in your own skin to do this job.

We don’t often delve into worlds we struggle to make sense of, or which challenge us to think differently. Sex work, I reckon, is one of those worlds. But take a trip to Hawera, to chat with Tilly, Anne, Harmony, Amy or Lydia – and I think you’ll come out at the very least, satisfied