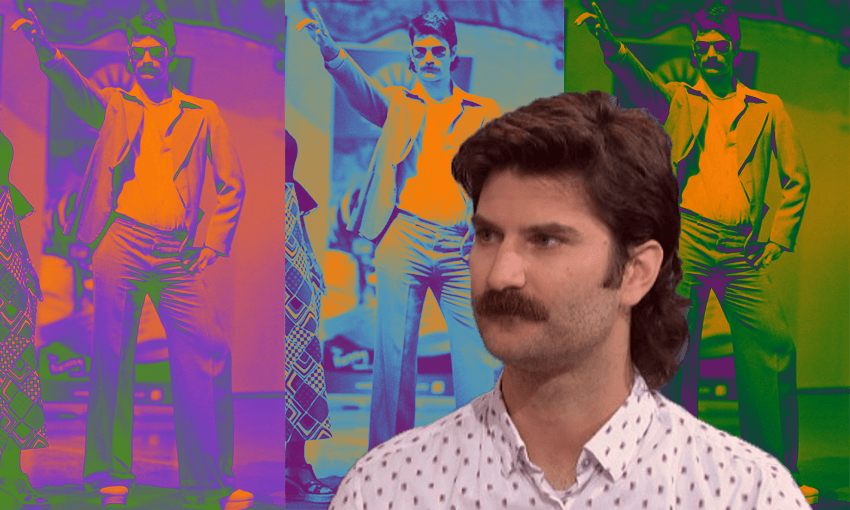 The mullet, the moustache, the myth: Joel Rindelaub is NZ’s newest science celeb

He has the perfect moustache, an exceptional mullet, and he uses terms like ‘face hole’ on national TV. Who or what is Dr Joel Rindelaub?

I was drawn in by the moustache, but it was the mullet that really kept me there. Watching TVNZ’s Breakfast yesterday morning I was fixated. Often, if I’m honest, the TVNZ1 morning show is just background television while I prep for the day and eat my breakfast. But on January 26, this was far more than a casual viewing.

I’m talking about Dr Joel David Rindelaub. Hair combed, moustache exquisitely groomed, the University of Auckland forensic science expert and chemical analyst made a stir on social media after his appearance on Breakfast to talk about the new Covid-19 community case. Ostensibly there to discuss whether the coronavirus could spread through air conditioning, Rindelaub instead presented a compelling case that all experts appearing on television should command top tier facial hair and be able to blue steel their way out of a locked room.

Of course, he did also talk science – and convincingly so. Rindelaub explained that it was entirely possible for a hotel’s ventilation system to be a mode of virus transmission.

But after the parade of scientists on the telly over the last year, there was something oddly refreshing about a man who looked like he had teleported straight out of the 1970s. Needless to say, I was hooked. And so was much of the country.

The tweets came thick and fast.

“I believe this guy. If anyone knows HVAC [heating, ventilation and air conditioning], he’ll look like this,” one wrote.

“I feel like I stepped back to Levin in the 80s. That’s awesome,” said another.

It wasn’t just his appearance; something about his use of scientific terminology felt new and exciting. At one point, he asked Jenny-May Clarkson: “If you sneeze or you cough, you’re going to expel some gross droplets from your face hole, right?”

There was even some speculation from the Twitterverse that TVNZ had simply dressed up Clarke Gayford in a wig and mo from Look Sharp. But, speaking to The Spinoff, Rindelaub confirmed he is indeed a real scientist and not Clarke Gayford in disguise.

In fact, if he’s to be believed, Rindelaub is far more than just not Clarke Gayford – he is also an actor AND an ice hockey player (along with being a fashion icon).

“Actor is a pretty loose term. Actual actors have talent and training, I’m just a dude that has a weird look and shows up on set every once in a while,” he says. “It’s mostly extras work, but I’ve done bits for Jono and Ben back in the day – Chris Parker and I had a scene. I showed up on the Late Night Big Breakfast randomly.”

Chris Parker confirmed that he had made an appearance with Rindelaub, calling the scientist and sportsman a “total catch”.

*(Rindelaub was in fact born in Minnesota. Geographically, though, that’s pretty close).

Oddly enough, Rindelaub says, ice hockey is what made him move to New Zealand. “Then I accidentally got this real job at the university.”

Of course, like any New Zealander even tangentially connected to film and television, he’s made an appearance on our most famous programme. “I did have one day on set on Shortland Street, but just as a background dude.”

And it doesn’t stop there: “Over the lockdown I decided to come up with a wildly unpopular science-based YouTube channel.”

Of course, grooming is the real reason I’ve asked Rindelaub to have a chat. The scientist is decidedly casual when I ask about how he maintains his trademark ‘do, perhaps not wanting to divulge the secret to his illustrious locks. “Mostly I wake up, I get out of bed, and then I just kinda let the flow do what it wants. The more times you wash it the less of a mullet it becomes, you’ve just gotta let it do its thing,” he tells me.

“The moustache has been growing pretty thick for about a decade now. So I just make sure it looks good and has a nice smile on its face in the morning and then just walk out the door.” From this statement it’s possible Rindelaub is suggesting his moustache is sentient and boy, it does look like it has a life of its own.

As a scientist, Rindelaub is mainly researching within the environmental field. “I care a lot about air quality, air pollution, indoor air quality – things like that – because they’re extremely important to human health,” he says. “A lot of diseases can be traced back to air pollution.” He’s also involved in analytical chemistry: “meaning I like to measure shit”.

And “face hole”, the expression Rindelaub used on Breakfast, is in fact a scientific term. “You’ll see that published in all the top medical journals,” he says.

Out of anyone else’s face hole I’d call bluff – but out of his, well, maybe it’s true.