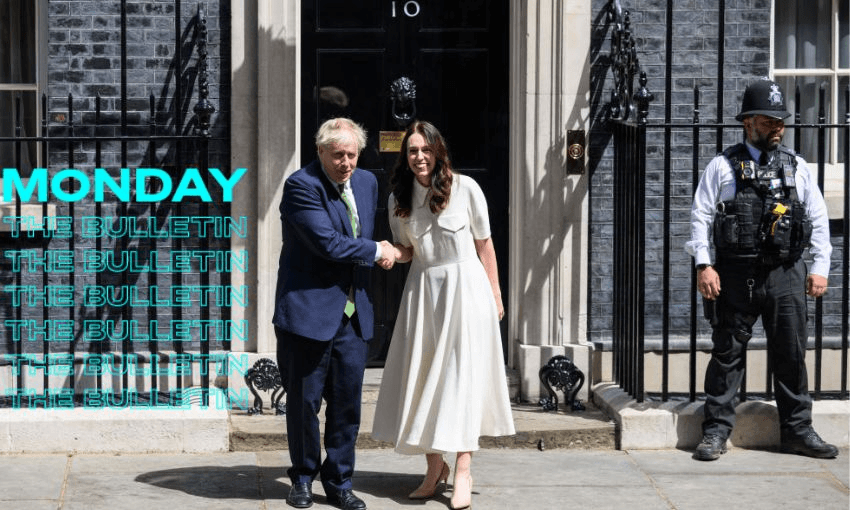 New Zealanders can now spend more time in the UK on a working visa. It’s one of the outcomes of a bountiful trip to Europe for the PM who now heads to Australia, writes Anna Rawhiti-Connell in The Bulletin.

Prime minister Jacinda Ardern met with British prime minister Boris Johnson on Saturday. There was some concern raised about the vigour of Johnson’s handshake with Ardern. During the meeting, they agreed to changes to the youth mobility scheme which will mean young New Zealanders can now spend three years in the UK. The age limit for eligibility for the visa will also rise to 35 years. The hospitality sector wants to see the scheme broadened to countries beyond the UK. Infometrics principal economist Brad Olsen said it was an interesting move considering all the talk of a pandemic brain drain. Three years does give people more time to put down roots and if you’re able to get sponsored to stay in the UK, it’s only another two years to wait until you can apply for permanent residency.

With the EU free trade deal done, is India next?

Trade minister Damien O’Connor spoke to Q&A’s Jack Tame on Sunday. Tame asked whether, with the concessions made with the EU around dairy and meat exports, there were plans to revisit negotiations on a free trade agreement with India. Agriculture is at the core of why an agreement between India and New Zealand has not been struck. Australia signed an interim free trade agreement with India in April, frustrating the Meat Industry Association. O’Connor said there aren’t expectations of a trade arrangement with India in the short term because of that dairy sensitivity. Tame also asked about whether recent events would change our trading relationship with China. O’Connor said that while the government was focused on trade market diversification post-Covid, China was still our biggest trading partner and we have a mature relationship that allows New Zealand to take independent  foreign policy positions.

Picking up on that theme, the Herald’s Thomas Coughlan (paywalled) has a measured piece of analysis about prime minister Jacinda Ardern’s promotion of a “values-based” foreign policy in Europe. Coughlan writes that “values-based” foreign policy can be “decried as vapid, meaningless, virtue-signalling guff” but he also argues those values can be “quite effective at demonstrating how the independent foreign policy can grapple with increasingly difficult questions around China.” The prime minister is now heading straight to Australia where the Australia New Zealand leadership forum (ANZLF) takes place on July 7 and 8. As Stuff’s Luke Malpass reports Ardern is stopping in Melbourne and will meet with Victorian premier Daniel Andrews before going to Sydney.

The ANZLF takes place in Sydney. Parts of New South Wales are currently experiencing very heavy rain and flooding. The New Zealand contingent includes members of a trans-Tasman indigenous business sector group who will discuss opportunities for indigenous people on both sides of the Tasman to work together. As the Herald’s Jenée Tibshraeny reports (paywalled), the forum will also be attended by seven government ministers including Grant Robertson if he has recovered from Covid in time. Australian prime minister Anthony Albanese and Ardern will be guests of honour at the ANZLF trans-Tasman innovation and growth awards dinner. Deputy leader of the opposition, Nicola Willis will do a session with her Australian counterpart, Sussan Ley, who has been deputy leader of the Liberal party since May 2022.