Good morning and welcome to The Bulletin. In today’s edition: What will Janssen jab mean for rollout, Collins calls for Super debate, and government at odds with health ministry over saliva testing.

The Janssen vaccine has been “provisionally approved” by Medsafe, but it’s not yet clear how and when it’ll be used in New Zealand. Our live updates reports Janssen only requires one dose, with two million of them secured by the government in a pre-purchase agreement. Cabinet will decide on a use plan by August, so it’s unlikely we’ll see any of it until well into the back half of the year. But that is also when the rollout is expected to reach the wider public, so it theoretically could speed up the rollout significantly.

The J&J/Janssen vaccine compares slightly less favourably against Pfizer, but has some advantages. A report from NBC covering CBC data showed that Janssen was good for preventing the worst impacts of Covid – serious illness and death. But only about two thirds of recipients are prevented from getting Covid altogether, compared to more than 90% with Pfizer. That study had a note that the data on the delta variant is much less comprehensive. But it is foreseeable that it could have widespread use among people already of a lower risk profile.

So will it have an impact on the rollout? In commentary provided through the Science Media Centre, immunisation expert Dr Nikki Turner said it is more likely to be used as a backup to the main Pfizer rollout, and in the rare cases where that vaccine isn’t safe for people to take. “The Janssen vaccine has an excellent safety and efficacy profile and has been widely used internationally with robust data sitting behind it.”

But no matter which vaccine is used, herd immunity remains a long way away. Initial modelling from Te Pūnaha Matatini suggests that 97% of the population would need to be fully vaccinated with Pfizer if a delta outbreak hit, reports the NZ Herald. That means life suddenly snapping back to normal any time soon is deeply unlikely, and Stuff reports Waikato DHB medical officer of health Richard Hoskins is warning that we should expect periodic outbreaks and measures against them through 2022.

National leader Judith Collins is keen to have a debate about raising the age of super, and wants to find some sort of cross-party accord. Stuff’s Henry Cooke reports Collins wants that approach so that the public can have some certainty about what will happen, if change does get made. After all, people often make decisions about when they’ll try to retire before they hit 65. The proportion of total government spending on superannuation relative to everything else is expected to grow in the coming decades, along with the total cost.

But raising the age of super has typically been tremendously unpopular – in fact it is one of the rare policies that can truly be described as an election loser. Since Sir John Key was PM, major parties promising to keep the age at 65 have won every time. Current PM Jacinda Ardern has ruled out ever doing it, making this a likely non-starter. The economics of it all are a bit more complex, and for more, I’d encourage reading this piece by Jenesa Jeram from last year.

The government is at odds with the health ministry over expert advice on saliva testing, reports Benedict Collins for One News. That’s based on documents showing the ministry rejected the advice, on the grounds that they were worried about accuracy. That in turn is leading to perceptions that the government is frustrated with the ministry, and how slow saliva testing has been to roll out.

A battle is underway within the Māori Council over control of the organisation, reports Newsroom’s Jo Moir this morning. Māori development minister Willie Jackson described the situation as sad, and said he had asked a mediator to intervene in the dispute. At the heart of it is former executive director Matthew Tukaki, who was ousted as chair of the Tamaki branch during recent elections. He brought a particular style to the role, and was profiled by Leonie Hayden two years ago.

Bus cancellations in Wellington are reaching ridiculous levels, reports Georgina Campbell for the NZ Herald. In fact, over the last month there were an average of more than 100 cancellations a day. It’s a consequence of long-running driver shortage, which themselves are partly down to some disastrous policy and employment decisions made years ago. Auckland Transport operators are also reportedly struggling with driver numbers.

There are – well, technically not unprecedented – but extremely unusual conditions for logging exports around the Gisborne coast right now. The NZ Herald’s Grant Bradley reports coastal shipping to get the “wall of wood” out is currently operating at levels not seen in a century, with a month’s worth of ships now backed up. It comes at a time when both demand is extremely high for logs, and supply chains have been thrown into disarray.

Some world news concerning a conflict New Zealand was involved in until recently: As observers overwhelmingly predicted, the Afghanistan government army is collapsing under an offensive from the Taliban, with US forces withdrawing. Dozens of districts have fallen, and thousands of soldiers have either fled or surrendered, to the point where Tajikistan is massively strengthening their border because the Taliban have taken control of the Afghanistan side, reports Radio Free Europe. In a telling symbol, the US military abandoned Bagram air base – once the key hub of their operation – so quickly that it was looted before the Afghan army could take control, reports the BBC. 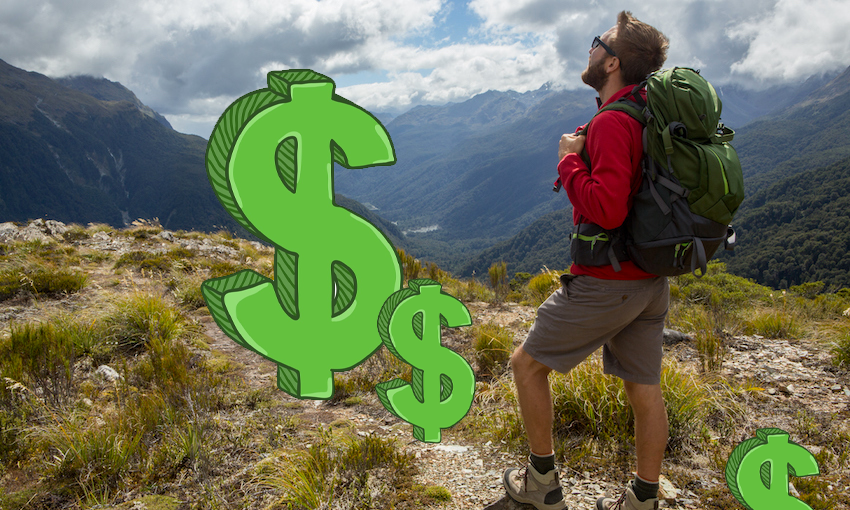 When ‘eager Kiwis’ miss out, who profits from taonga like the Milford Track? (Image: Getty Images/Tina Tiller)

Right now on The Spinoff: Laura Walters questions why Oranga Tamariki is so resistant to change until they’re embarrassed in the media. Andrew Geddis writes about the legal challenge against the Climate Change Commission. Justin Latif reports on how South Auckland budgeting services see the small increase in benefit levels. Fiona Farrell writes about the private companies snapping up scarce places on the Great Walks of Aotearoa. Comedian Pax Assadi describes the first time he was heckled off the stage – if you can call it that – in the latest episode of First. And Stewart Sowman-Lund talks to Angella Dravid about the weird new crop of contestants on Taskmaster NZ.

Some personal news: This is quite a difficult thing to write, but I’ve resigned from The Spinoff and will be finishing up with The Bulletin in six weeks. I go with sadness but not regrets, at leaving something that has been such an enormous part of my life for three years. To have the opportunity to throw everything into writing it has been a privilege. So while it is very hard to leave, I’m proud of what it has turned into, and know that the time is right for someone else to take it on.

I’m leaving to go and be the new executive producer of Q+A, at TVNZ. It’s a show I’ve admired for years, and the chance to be part of it is really exciting. These sorts of opportunities almost never come around, and when I look back on it all later on, I want to know that I’ve challenged myself to work alongside people who are the best at what they do, making telly that serves and informs the public.

A few years ago I mentioned this, but writing The Bulletin is like a letter to a friend. Over the years, our circle has grown rather a lot. You readers are who makes this worthwhile, and I am so grateful for all of your contributions to it. With all sincerity, I will deeply miss talking with you.

And another thing I said a few years ago: This would only ever have worked at The Spinoff. I stand by that today. Someone reading this might be thinking about taking up the job, and I can tell them that The Spinoff is a unique and beautiful place to be. I cannot speak highly enough of the people who make it what it is, the support people give each other, and the vision for the work they want to create. The Spinoff has changed a lot since I started, with the biggest change being the amount it relies on Members to fund the editorial team. So if you’ve enjoyed the Bulletin over the past few years and want to help them employ more journalists, please support them in that, now and into the future.

And with all that said, here’s what’ll be in tomorrow’s Bulletin: The same thing that has been in the 700 or so previous Bulletins – what’s in the news, and why it matters. I’ve got six more weeks of telling you all what’s going on in this country, and I plan to enjoy it.

Please indulge me a little bit for our sport section after all that. One of the great pleasures I’ve had at The Spinoff is to do The Offspin podcast with Simon Day, and our latest episode brings together the voices of our listeners on what the World Test Championship win means to them. And if you were wondering, The Mace is going on tour – details here.