Significant health sector reforms are likely to be announced ahead of the Budget in May. That comes out of a speech earlier this week from health minister Andrew Little, who has discussed the principles underpinning what the reforms will actually be. They are that many groups in society are disadvantaged in the health system, and that the District Health Board system isn’t working. But on both points, Little’s speech left plenty of room for contesting how those changes will be achieved.

On the question of DHBs, both the structure of their responsibilities and the number that exist will be central to the reforms – and we don’t yet know the answers to either. There was an excellent report on Politik yesterday that looked at this, noting “clues” that rationalisations were still on the way – “POLITIK understands the Transition Unit has accepted the Simpson-Roche review’s argument that DHBs need to be rationalised through mergers.” Overspends at DHBs are now extremely common, to the point they were last year described as a “feature of the system”, and the costs they’re facing are increasing. On the other hand, health commentator Ian Powell told Newstalk ZB that it appears the minister is now looking at less centralisation of the DHB system than previously indicated.

Another major recommendation from the Simpson-Roche review is the establishment of a Māori Health Authority. Under their version, that organisation would have played a relatively limited direct role, but it appears the government is considering giving such an organisation broader responsibilities. Lady Tureiti Moxon, the chair of the National Urban Māori Authority, said there is currently a distinct shortage of detail about how such an entity would operate, and whether it would have the power necessary to help turn around the disadvantages Māori currently face in the health system. “Mana motuhake (independence) in the form of a Māori Health Authority is paramount and it must have teeth so we achieve equitable outcomes for our people and save lives.”

Meanwhile, on the health system generally, hospitals are struggling after a couple of months with heavy loads. Radio NZ’s Tess Brunton reports it isn’t just Dunedin that has reached capacity in recent days, patients are facing lengthy delays, and many shifts are being run understaffed. What the story indicates is that hospitals are effectively the tip of the spear – it’s very noticeable when an emergency department says it can’t take in any more patients, but there is strain on every level of the system that is less obviously visible.

Possible Covid-19 transmission has taken place at the Grand Mercure quarantine facility in Auckland, reports our live updates. It comes after genome sequencing found a link between two guests that tested positive, despite them not sharing any space with each other. About 250 people who have left since March 10 are being asked to get retested and remain in isolation at home until it comes back negative. There is no evidence of any cases in the community.

New Zealand’s supply chains may be impacted by the big boat blocking the Suez Canal. As Newshub’s Lana Andelane reports, about 12% of all global trade goes through the channel, because it dramatically reduces shipping time between Asia and Europe. It’s not clear whether exports and imports directly relating to New Zealand are caught up in the crush, but in a globalised trading system blockages have knock-on effects. MFAT is currently monitoring the situation.

The Cook Islands PM is meeting PM Ardern today, and intends to push hard to accelerate a travel bubble. Newsroom’s Jonathan Milne (who until recently was working in the Cook Islands) reports PM Mark Brown is concerned that a lack of tourism will have a calamitous effect on the economy, and that government debt is rising fast. He’s also concerned about people who can’t find work leaving the country and not coming back. One of the major hold-ups around a bubble is that the Cook Islands health system would struggle to handle an outbreak. Meanwhile, on travel generally, Covid-19 minister Chris Hipkins has told Newshub that even with borders reopening, it will be years before travel is back to normal.

A new train between Hamilton and South Auckland has been described as a “great start” for public transport. Radio NZ reports the new service – Te Huia – was launched yesterday, and will run return trips from Frankton to Papakura twice a day during the week. Up to 300 people a day could catch it. It’s not exactly a perfect service, but as Hamilton mayor Paula Southgate said, it is at least a start in taking a few cars off the motorway.

Race relations commissioner Meng Foon has walked back and clarified comments about racism in the police force. The NZ Herald reports he has retracted his original blanket statement – “police are racist” – saying it was incorrect. However, Foon also noted that there have been admissions from every level of the police that systemic racism exists within the force, and that New Zealand cannot be naive about the issue.

Some reader feedback on The Side Eye comic about the K-shaped recovery, from someone who wanted to stay anonymous and may well have been joking: “I just want to make it clear that I worked hard to be on the top side of the K shape. I even bought second hand skis, and flew to Canada via Hong Kong to make use of discount airfares. Not to mention the fact I spent days searching for the best return on my inheritance!” 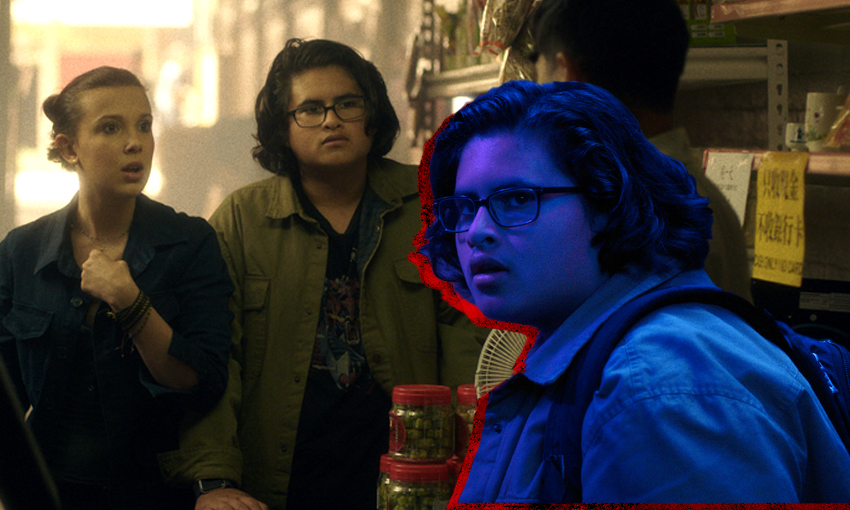 Right now on The Spinoff: Siouxsie Wiles writes about what we’re still learning about the first days of Covid in New Zealand, a year on. Justin Latif reports on the complicated reaction from advocates in South Auckland to the latest round of housing reforms. Nicola Gaston argues against calls for transparency being used as a mechanism to slow down climate action. Andrew Geddis argues against a recent Spinoff column about the dangers of becoming a republic. Georgia O’Connor writes about the struggle women with endometriosis have just to get diagnosed. Stewart Sowman-Lund talks to rising young film star Julian Dennison, on Kiwis succeeding in Hollywood and getting a gig in the new Godzilla blockbuster. Business is Boring speaks to a firm that teaches ex-prisoners coding skills that will give them a much better shot at staying out. And Tara Ward does a deep dive on what the most controversial thing Hilary Barry has ever worn on TV is.

For a feature today, a memorial to a website that did some of the most thoughtful and insightful writing about internet culture in the world. Mel Magazine is going to cease publishing after parting ways with their owner, and are currently searching for a new owner, but the kicker is that all the writers have lost their jobs. So I thought I’d go back and share one of the best things they published, that also summed up the approach of taking seriously concepts that other publications might dismiss as online nonsense. Here’s an excerpt from NZ journalist Madeleine Holden’s 2019 piece on the use and misuse of the term ’emotional labour’.

Men being more aware of the unacknowledged background work women put into their relationships is an unambiguous plus, but there are several problems with using the term “emotional labor” to describe the range of tasks it now covers. As Hochschild explains to The Atlantic, the first and most basic is that many of the tasks are, quite simply, labor, like doing the laundry (physical labor) or planning school lunches for the week (mental labor).

These tasks don’t necessarily involve internal emotional regulation; they’re just domestic work, pure and simple. Calling them “emotional labor,” as Julie Beck points out, has the curiously sexist implication that all work performed by women is somehow about feelings. “It almost seems like we’re saying that women do the work and women are emotional, so that must be emotional work,” she notes. “Like, chores are just labor.”

How soon will Pasifika teams be involved in Super Rugby? It depends on a few factors. Radio NZ reports a funding boost has been made available by World Rugby, which could mean two new teams get confirmed in the coming weeks. Part of the deal to get into next year’s competition is raising enough money to prove to NZ Rugby they’ll be financially viable, along with meeting other conditions. At this stage, Newshub reports there are warnings coming from NZ Rugby that there’s still a way to go on that.