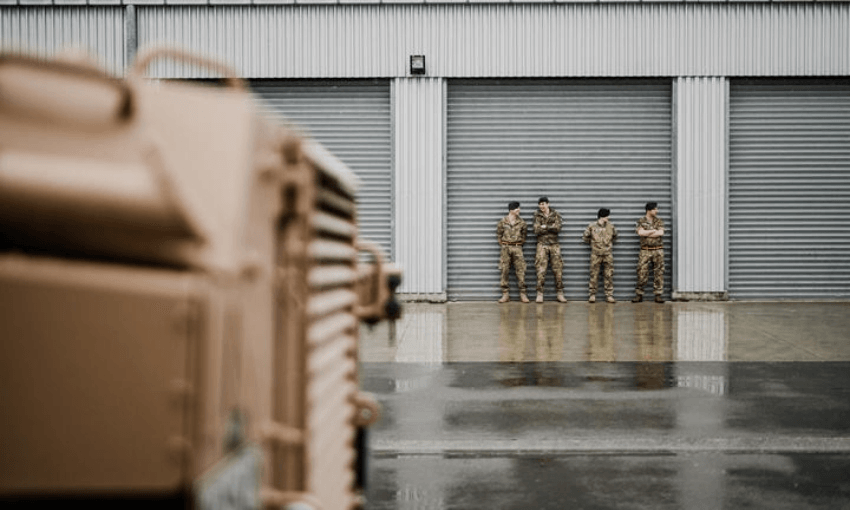 Soldiers at Linton Military Camp, the main operational hub of the New Zealand Army with about 2000 people based there. Photo: RNZ /Dom Thomas

The Bulletin: Soldier with far-right ties on spying charges

Soldiers at Linton Military Camp, the main operational hub of the New Zealand Army with about 2000 people based there. Photo: RNZ /Dom Thomas

Good morning and welcome to The Bulletin. In today’s edition: Soldier with far-right ties on spying charges, bright line test could be extended, and Oranga Tamariki boss Grainne Moss will not be resigning.

A soldier with strong ties to the far right fringe has been charged with multiple counts of espionage. As Florence Kerr and Thomas Manch report for Stuff, he is believed to be the first person charged with espionage in New Zealand. The soldier is alleged to have improperly accessed information, and then shared it with an entity or foreign government which has not been publicly named. He was arrested in December, and faces up to 14 years in prison if convicted.

The far right ties are worth covering further. They relate to a now defunct group, called the Dominion Movement, which the soldier led. After the March 15 attacks, the group shut down. However as Newsroom’s Marc Daalder reports, there are strong connections between that group, and the still existing Action Zealandia, suggesting more of a reorganisation than anything else. The soldier is understood to have continued participating in far right political activities following the March 15 attacks. For clarity, his holding of objectionable views is not why he’s up on charges – the alleged espionage is why he’s up on charges.

Regardless, there is nervousness around whether such views are widely held by Defence Force personnel. In this story from Newsroom this morning, that issue is discussed. So far two soldiers with active links to such groups have been uncovered, the second of which was part of Action Zealandia while serving, and is now no longer an army reservist. Is the NZDF concerned? Here’s part of a statement they gave on the matter:

“There have been robust policies and procedures in place within NZDF that highlight potential threats from a wide range of groups for years preceding March 15 2019.”

“The NZDF has confidence in its security measures, which include the threat posed by those belonging to, or who sympathise with, groups that may threaten the security of the Defence Force and wider public. The Defence Force is a community of people who look out for each other, and there are robust systems in place to hold people to account.”

The bright line test on whether tax needs to be paid on sales of houses is back in the news, as it could be extended. As Newshub reports, it’s one idea swirling around in the mix relating to skyrocketing house prices, the Reserve Bank’s interest rates, and the future of tax. For more on the bright line test, I found this Patreon article by Liam Hehir particularly useful, in explaining what exactly it is and isn’t as a mechanism.

An update on the news around Oranga Tamariki boss Grainne Moss’s future: As Radio NZ reports, there are now tensions between two leading ministers, with minister for children Kelvin Davis criticising Whānau Ora minister Peeni Henare for openly speculating about a resignation from Moss. As it happens, she intends to stay on in the role.

You may have noticed that there’s been a lot of local government news recently, and it’s a stretch to say any of it has been good news. So, why? Kristin Hall from One News asked local government academic Andy Asquith, who put it in very simple terms – a lot of councillors simply don’t know what they’re doing, and don’t understand the roles they’ve been elected to. In fairness, the way local government is funded also puts a huge strain on councils, and you should read Stuff’s Thomas Coughlan on just how much money will be needed to bail the sector out.

MPs have been swearing their oaths of allegiance this week, and to many observers they’re starting to look all a bit out of date. As Newshub reports, the Māori Party intends to put a members bill in the ballot to get it changed, so that it includes the Treaty of Waitangi as well as the Queen. Some MPs found a way to mention Te Tiriti in some shape or form, including new Green MP Dr Elizabeth Kerekere, who brought with her a copy signed by her ancestors.

As a fan of hyper-local journalism, please indulge my sharing this piece about fences in a nature reserve in the Tasman town of Wakefield. As Stuff’s Amy Ridout reports, some reserve users find the fences lining the paths offensive, as they cage people in. But those that put the fences up say the point of a nature reserve is to protect nature first, and be a place for humans to enjoy second. It might not be a big nationwide issue, but it’s the stuff of life that people are deeply passionate about, and the story is told fairly and comprehensively.

For those as interested in minor parties as I am, here’s a new story for you. New Conservative deputy leader Victoria O’Brien has resigned from the role less than a week after getting the job, as part of a new leadership ticket under former deputy Elliot Ikilei. On the way out the door, she took a shot at former leader Leighton Baker, saying his continued involvement was why she left the party. But when contacted, Baker was totally bemused by the suggestion, saying he no longer had any involvement in the party. It’s all rather odd.

Right now on The Spinoff: Alice Webb-Liddall writes about the challenges kura Māori students face when arriving at university. Duncan Greive looks at the situation in the US of a defeated president attempting a kind of coup, and asks if it could happen here. Josie Adams reports on how 2020 has changed the curriculum for biology teachers. Danyl Mclauchlan reviews a new memoir by former president Barack Obama, of which there will be a huge number of copies in bookstores this year. Sam Brooks finds plenty to be disappointed about in the new screen adaptation of Hillbilly Elegy. And comedian Janaye Henry gets in the Christmas spirit on the question of why Santa apparently can’t be a brown person.

For a feature today, veteran political organiser and hearty union bloke Matt McCarten is promising to take pickets to the front doors of wealthy business owners during disputes. He outlined the aggressive and unorthodox strategy in an interview with Stuff’s Steve Kilgallon, and discussed his new union aimed at bringing together various migrant worker groups. To give you a sense of his comments, the story ran on the front page of the tabloid Sunday News, with McCarten quoted as calling bad bosses “absolute leeches”. Here’s an excerpt:

He says he has about 40 volunteers lined up, with veteran Unite organiser Joe Carolan as ‘captain of the guard’, with another 30 primed to run the name-and-shame social media. The idea came to him, he says, after first considering constituting a French Revolution-style Court of the People.

He expects he’ll be charged with vigilantism, like the judge-and-jury types who pursue paedophiles. He has an answer for that: he’d go after paedophiles too if they could make a small payment, never admit their guilt, be allowed to retain anonymity and continue as they did before.

New Zealander Greg Barclay will be the new boss of the International Cricket Council. As Tristan Lavallette reports for Forbes, he got there thanks to the backing of the powerful BCCI in India, who applied heavy pressure to countries who were on the fence about who to support. That piece really is quite the read, and it suggests that Barclay’s election was less about him as a candidate (by all accounts he’s a good and competent administrator) and more about stopping a factional rival from holding onto the job. Some comments from Barclay can be found in this wrap from the NZ Herald’s Dylan Cleaver.

And in breaking news, there are reports this morning that footballing legend Diego Maradona has died. He was a genius on the pitch, and lived a wild and often difficult life off it. To quote a tweet from former English footballer and broadcaster Gary Lineker, “by some distance the best player of my generation and arguably the greatest of all time. After a blessed but troubled life, hopefully he’ll finally find some comfort in the hands of God.”