A big step towards the repeal and replacement of the Resource Management Act has been announced. And befitting a particularly complicated piece of legislation, additional steps have been added into the process, with the intention of making the final shape of the laws that come out of it fit for purpose. Interest reports the legislation will be called the “Natural and Built Environments Bill”, and will be the primary aspect of three new laws being pushed through to replace the RMA.

In practice, it will set environmental limits, but also outline the positive outcomes the legislation aims to achieve – a change in onus from the RMA. The legislation has first been released as an “exposure draft”, which will be sent to select committee for an initial public feedback process, before being sent back to go through the regular legislative process, which will itself include another go through select committee.

Specifically, it’ll be the environment select committee, and as Newshub reports there is some concern from National and Act are worried about that being chaired by Green MP Eugenie Sage. The comments from Judith Collins and David Seymour probably overblow the power held by SC chairs, but they do reflect that underneath this process there will be a competition of interests. When RMA reform comes up as a topic, some people hear stronger environmental protection, while others hear slashing of red tape to get more building done.

One thing that environment minister David Parker appears to be keen on outside of that dichotomy is reducing the power of local government planners. Politik (paywalled) reports that significant planning powers will be moved into the purview of central government, on the grounds that to date some councils have struggled to achieve either environmental protection or house-building. In Parker’s view, local governments may even enjoy not having so much responsibility over this area in future – continuing a strong trend of this particular central government being very kind in seeking to reduce the workload of councils and other regional bodies.

The Children’s Commissioner has asked for police to be called in, after the publication of a video showing alleged mistreatment of children by Oranga Tamariki staff. Newsroom’s Melanie Reid and Bonnie Summers broke the story with a video that appeared to show violent treatment of the children, including being thrown to the ground and in one case a child being put in a headlock. Law professor Mark Henaghan said the video showed “clear assaults” and illegal treatment. The incidents took place in a Care and Protection Residence, where vulnerable children aged up to 16 who need intensive support are housed.

Wellington just can’t catch a break, as one of the parts of the country smashed by the weather overnight. Stuff reports a local state of emergency has been in place overnight, and some evacuations from the coast took place yesterday. For those wondering, it’s still not a good idea to head down to see the big waves – high tide isn’t until just after 9, so more damage could be done. Some power outages were also reported, and debris has been scattered across roads. No doubt it’s a great day to stay home and keep warm in one of Wellington’s many modern, dry houses.

Whangārei District Council has made a provisional decision to not be part of the government’s Three Waters reforms, reports Susan Botting for the Northern Advocate. The council claims they haven’t been provided with enough information by central government to continue participating in the reforms – though mayor Sheryl Mai left the door open to getting back on board. To date, the WDC has ranked among the better performers on managing water services around the country.

A concerning story about sea levels, which are coming up faster than expected around Canterbury: Stuff’s Amber Allott has reported on a study done on behalf of the council, which found Lyttelton sea levels have risen twice as much as those reported by the environment ministry. The new data is seen as being more in line with what climate change models predict – though a note, the study only applies to the Lyttelton site, so may not necessarily be replicated nationally. On that point though, the battering seen around coastal Wellington shows that when it comes to a storm surge a little bit of sea rise can go a long way.

Here’s a hugely useful explainer about what the proposed hate speech laws would and would not do, after a significant amount of confusion was created by the government ministers trying to push them through. George Driver has gone through both the claims and what the proposal actually says in excellent detail, noting that we already have some laws in place around what might be termed hate speech, and that the proposed new laws aim to refine that.

Interesting things could be happening at Sky, after the pay-TV company announced it had been the subject of “unsolicited approaches”. The NZ Herald’s Chris Keall reports the comments were made at an Investor Day presentation, in which the chairman also asserted the low share price doesn’t reflect how Sky sees the value of the company. It may possibly mean that a takeover bid is in the works, but if that is the case, Sky is keeping quiet, and no potential buyers have come forward as yet. 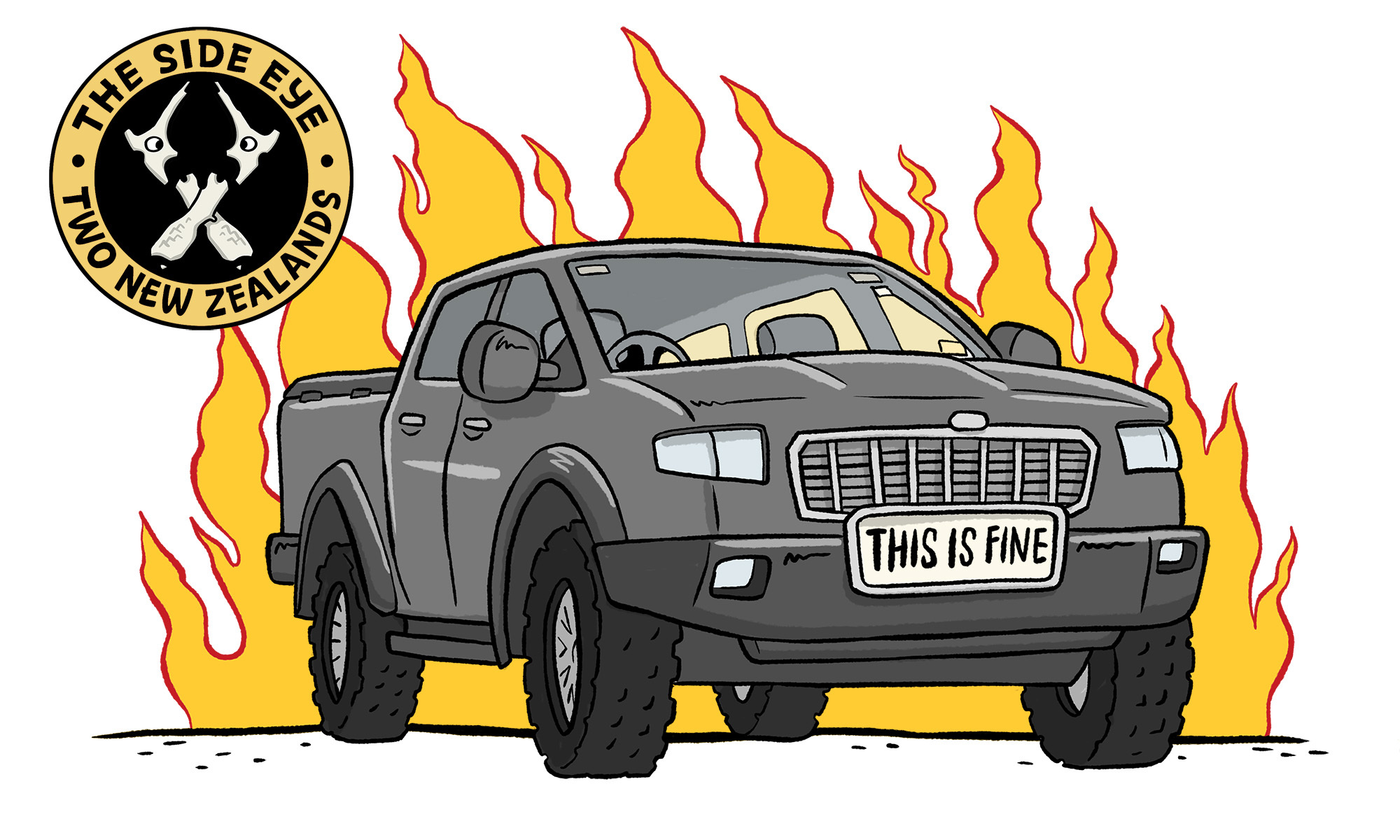 Right now on The Spinoff: A new edition of The Side Eye takes on ute culture, and New Zealand’s complete failure to plan a car fleet around climate goals. On a similar note, Bernard Hickey writes about capital gains trumping climate, and why that means we’ll fail to reach those goals. Toby Manhire reports on the sobering findings of a study on vaccinating for Covid herd immunity. Tara Ward writes about The Block being hit by Covid, and how it has affected the show. Olivia Sisson writes about the recruitment crisis currently affecting hospitality. And I wade into the story about the Charlie Chaplin musical getting cancelled, and bravely take a stance in favour of much more cancel culture.

For a feature today, a word from our soon-to-be co-editor Alex Casey, about what the support of our members helps us do:

The long-form work we do – particularly the stories that require long nights and legal hullabaloo and nationwide travel – are only possible with the support of our members. It’s so humbling to remember all the people out there who have put faith in us to tell the stories that nobody else will, and all I can hope is that we can continue to tell the stories that will make you laugh, make you think or make you reconsider some part of this weird world we live in. Thanks for coming along with us for the ride, my inbox is always open to your thoughts, hopes, ideas and chain emails. – Alex Casey, Features editor

The Spinoff can’t exist without our members’ support. Please become a member and donate today.

In sport, an astonishing effort from a New Zealander in the world of ultra-marathons: Stuff has covered runner Ruth Croft’s first attempt at a 100 mile race, held in California. The Greymouth-born Croft did so well that in the end she placed second among the women racing, with a positively speedy time of 17 hours, 33 minutes. This sort of jog is actually kind of normal for her – earlier this year she ran a casual 102kms to win the Tarawera Ultra, beating both male and female competitors.