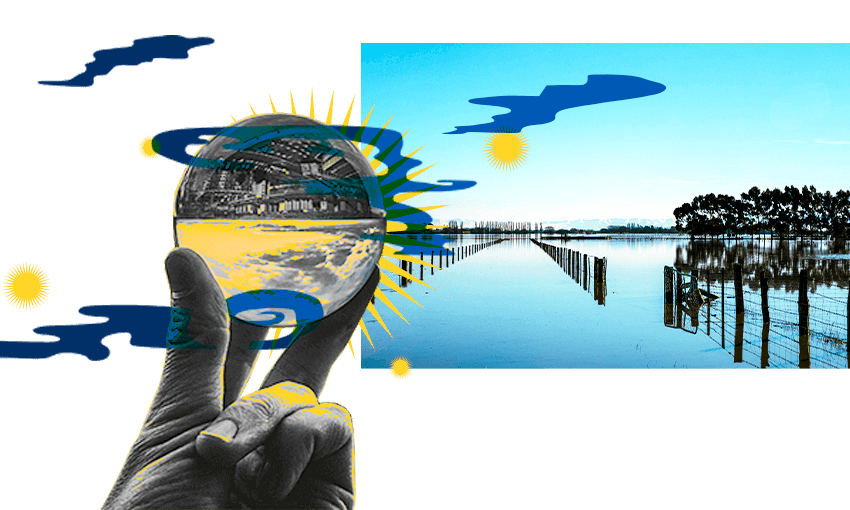 How can we predict and prepare for the floods of the future?

If we know what to expect, we can plan accordingly. But what does that mean when we’re talking about floods?

Aotearoa is a country of water. We’re surrounded on all sides by oceans. Lakes dot the motu. Rivers twist and wrap around our landscapes.

It’s perhaps no wonder then that flooding is the country’s most frequent natural disaster. It’s estimated that there were around 100 floods between 1968 and 2021. Predicting where the next big flood will be, and how bad it could get, could save heartache, homes and, in the most extreme cases, lives.

But designating areas that are flood-prone isn’t as simple as blocking out sections of land that are close to rivers or the sea. Understanding flood risk means understanding climate change, weather patterns, geography and water flow, and how built structures amplify or hold back floods.

Look at any regional council website in New Zealand and you’ll find numbers for the likelihood that a flood of a particular size will happen (here’s Wellington’s for example).

This content was created in partnership with Tower Insurance. To learn more about how flood risk works and to speak to an expert about your own property risk profile, get started by clicking here.

Flood modellers can work out that likelihood by mapping out areas that have flooded in the past and making models that include things like rainfall, water volume, flow speed, and land roughness.

But the likelihood of a flood happening is different from flood risk. Flood risk not only takes into account how big or powerful a flood is but also how vulnerable a nearby area is; vulnerable to losing buildings, losing or disrupting lives, or losing money in repairs. An area could be at high risk, even for a small river splash-over, if, say, low-lying houses have been built right up to the river.

Tower Insurance recently launched a model that gives their customers a low, medium or high risk rating for their home, based on both the risk of a flood happening and the cost of repairing or replacing their damaged home. For Tower CEO Blair Turnbull, it’s a matter of understanding the impact of flood on homes and businesses, and sharing that with customers and communities to better shape and manage our collective futures.

“We are acutely aware of the climate risks faced by New Zealand. The launch of this model is aligned with Tower’s commitment to a sustainable future and being more open and transparent around insurance and risks associated with climate change,” Turnbull says.

And while the introduction of the model did mean that a relatively small number of Tower customers saw a slight increase in premium, close to 90% have actually had the flood-risk part of their premium reduced.

It’s a positive start, and one which should lead to fairer coverage and pricing across Aotearoa. The trouble with modelling flood risk at the moment, though, is that there’s not yet a single standard for how it gets calculated. “Everyone does it their own way,” acknowledges Iain White, professor of environmental planning at the University of Waikato, and an advisor to Tower Insurance.

“There are different definitions, thresholds and methodologies so we don’t have a great picture of the national flood risk because we do it slightly differently in different areas,” White says.

White’s part of a team, including scientists, councils, government and hapū, creating a national, open source flood risk map – using the same methods across all areas.

His particular focus is on including predictions of how climate change will influence regional weather patterns, and how that links in to flood risk. A warming atmosphere makes extreme weather events – including heavy and sudden rainfalls that are a key ingredient to flooding – more likely, says White.

It’s hard to predict which area is going to be hardest hit, he says. “Even if in some areas rainfall remains the same on an annual basis, it’s just going to be distributed differently. You might get drier periods and then bigger, wetter dumps.” It’s those sudden downpours that can overwhelm a river or stormwater system.

Climate modelling like the work done by Niwa is part of it. The other piece to the puzzle is understanding how the structures cities build impact flood risk – and how to lessen that risk through better building.

“What climate change means is that what water lands on – pipes, drains, landscapes – will have to deal with volumes they probably haven’t been designed for,” says White.

With a greater need for more and denser housing, these kinds of flood risk models can tell councils and developers where to build more densely (low risk areas) and where to ease off.

Areas that aren’t suitable for housing could be great multi-use areas, says White, that are recreational, habitats for wildlife and, importantly, can store rainwater. Water catchments (like these beautiful urban gardens or ponds) move water off concrete, out of drains and off roofs, slowing down water flows and water pooling.

And minimising flooding risk isn’t just about where people build, it’s also about how.

Ryan Paulik is a Hazards Analyst with Niwa. “We’re really starting to build a picture of where floodplains are. Once we have those flood maps we can actually start to look at what’s in those floodplains and what’s the damage and loss that’s likely to occur from a modelled flood scenario,” he says.

Paulik has gone to the aftermath of six of New Zealand’s most recent floods, including the ones in Edgecumbe and Westport, to understand how buildings dealt with the floodwaters. He collects data on how buildings are damaged and then translates that into a model of how vulnerable particular building types are.

In Edgecumbe, a large proportion of the homes were built in the ’70s and ’80s with chipboard flooring. When the homes got wet, that flooring would warp, meaning the damage was more severe than homes with different flooring types.

And in the case of the 2014 Christchurch floods, houses on concrete slabs were more vulnerable. “We visited some sites where there was an early 20th century villa on the front of the property and a newer building on a concrete slab sitting at the back. The old villa up on piles had no water through it and then the building at the back had half a metre,” he says.

These models that Paulik and others provide can be used in a number of ways. Councils could, for example, create guidelines around what materials new builds use or how they’re constructed. Or insurance companies could more easily factor building type into the cost of a premium.

Both White and Paulik emphasise how important this kind of modelling work is given our changing climate – as White says, “Even if we can’t predict exactly how climate change will play out, we can make it so it’s less costly for future generations by thinking about design and risk.”

And with insurance companies like Tower actively trying to ensure their pricing and offering takes flood risk into proper account, the end result of getting that work right should ultimately be a system that’s better and fairer for all of New Zealand.

This content was created in paid partnership with Tower Insurance. To learn more about how flood risk works and to speak to an expert about your own property risk profile, get started by clicking here.

Tower Insurance
Made possible by