Can a six-part series do justice to the Polynesian Panthers’ story? Dan Taipua tunes in.

This year has seen two important occasions in the history of New Zealand – the apology from the Labour government for the racist dawn raid campaign against Pacific immigrants and the 50th anniversary of the founding of The Polynesian Panther Party. As the histories of both are discussed throughout education campaigns, a podcast series, school tours and formal channels of government, a new mini-series for television, The Panthers, dramatises the lives of those involved in the party and the forces that stood in their way, offering a unique perspective on real life events. As more and more of the lived history of urban Pasifika comes to light, does the fictional portrayal of The Panthers illuminate or obscure?

From its opening frame, The Panthers commits itself to a stylised presentation. Musicians Troy Kingi and Diggy Dupé act as a Greek chorus offering prologue in lyrics and song – a music video to set the mood ends with the series lead character Will ‘Ilolahia posing in the iconic wicker chair portrait of Huey P Newton. Within a few scenes, the episode proper has moved from dimly lit pubs to sex work at the docks, petty criminal mischief, police harassment and arrest, a meeting with the governor general, parental discipline and a gang riot. The show has a tightly packed structure that builds a clear picture of the world of 1970s central Auckland. Given the half-century passage of time, growth and gentrification, it may seem like another planet to younger viewers. From the streets, to the home, to the halls of power, The Panthers gives a strong and cohesive impression of an environment at boiling point – an illuminated stage for the lives of its characters. Huey P Newton (left) and Dimitrius Schuster-Koloamatangi as Will ‘Ilolahia

The strongest grounding for The Panthers historical perspective is its focus on real-life party chairman Will ‘Ilolahia, played by newcomer Dimitrius Schuster-Koloamatangi. ‘Ilolahia is at once unique in the suburban scape of Auckland and archetypical among figures involved in radical resistance; charismatic, bright and educated (a university student in 1971) but also disaffected by the politics of the time and dissatisfied with an unjust world. The character and person seem impossibly young – only 19 years old at the time – and as hard as we might imagine the journey from youth to activist to be, the series shows that journey to be even more fraught. While the show covers other real-life personalities from within the Polynesian Party, its secondary focus is on the future Dr Melani Anae (played by fellow newcomer Lealani Siaosi). As complement and contrast to the impulsive Will, the dramatised Anae is equally dedicated to the Panther cause while keeping a focus on medical school studies and the specific responsibilities and trials that rest with young Pasifika women.

The riskier character portrayals in The Panthers lie in two separate groups – public figures whose lives and personalities are well-documented, and characters who have been invented to help develop storylines. In the first episode we glimpse a bizarre character in passing, named Robert, who’s identified in later episodes as Muldoon, leader of the New Zealand National Party and architect of the most banal and effective campaign of political racism in the country’s history. Portrayed by veteran character-actor Roy Billing, this Muldoon is brought down to human scale; a simple-minded populist dealing in petty fears; a ham-faced gremlin who is occasionally capable of poetry; the mirror opposite of the protagonist Will. The demystification of a historical figure has the effect of levelling dramatic stakes. The future prime minister and the young party members are now engaged in a conflict of ideology and approach whereas they might never have crossed paths in real life.

Other characters in the series are either amalgamations of real-life people or wholly-invented, including the family of a naive Palagi policeman who moves from Southland to brown and urban Ponsonby, an experienced and morally-compromised Tongan policeman, and a volatile leader of street gangs. In an order that reverses the demystification of Muldoon, these characters are created to personify historical forces. It’s difficult to illustrate the nebulous conditions of crime, over-policing and injustice of a decade but giving a face and voice to those conditions makes them more relatable. Thankfully, these roles are all filled by experienced actors with standout performances by Frankie Adams and the explosive Beulah Koale, who puts in a career-defining turn as the violent gang leader “Ice”. 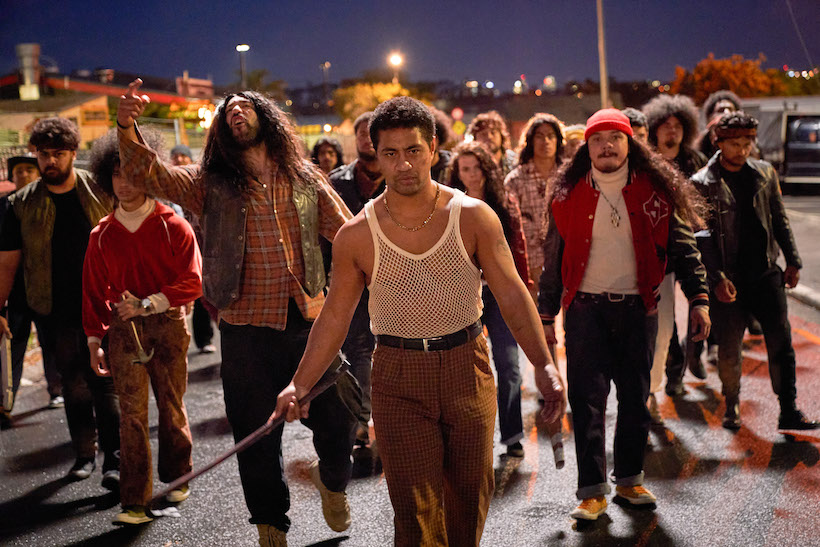 It’s only right that the rebellious story of The Panthers should be risky, a push against the easy solutions and style of mainstream television. Dramatised events in New Zealand history have had mixed results in the past decade, with some potted made-for-TV Sunday night features that have at best treated their subject lightly, and at worst succeeding in creating a glib distance from the event itself. Not so for this story that keeps a steady pace and bold style, some of the best locally-made viewing of the year.

Along with the advent of the Dawn Raid apology and the Polynesian Panthers 50th anniversary, there is an increasing awareness of and appetite for stories of radical politics in film and TV like Spike Lee’s BlackkKlansman and Shaka King’s Judas and the Black Messiah. Each works within their means to communicate stories from the past to new and younger audiences, using drama to build context in the minds of viewers.

As an effort in entertainment and in education, The Panthers succeeds in showing a world that has already passed but remains unobserved. If you drew a squiggly line around Ponsonby, Sandringham and Albert Park in the 1970s, you’d have an entire universe of stories available to you. The show’s creators have done just that with The Panthers. Strong language and graphic violence might prevent family viewing, but it should be attempted anyway by those seeking a view to our hidden histories.

The Panthers lands on TVNZ On Demand from today, and screens on TV1 Sundays at 9:30pm.