In 10 x 100, we survey a group of 100 people via Stickybeak and ask them 10 questions. So far, we’ve quizzed Wellingtonians, holiday motorists, locked-down Aucklanders and Australians. This time, we asked reality TV watchers their thoughts on this polarising entertainment genre.

Here at The Spinoff, reality TV is close to our hearts. Despite howls of protest from certain commenters every time we publish something about the genre, reality TV reckons – exclusively smart and funny ones, of course – have been at the core of The Spinoff since the very beginning.

And New Zealanders, despite claims to the contrary, love reality TV. As Alex Casey wrote in The Spinoff Book in 2019, “Everything about the genre grates against who we think we are as Kiwis. We don’t like public displays of emotion, we don’t like putting ourselves out there and we aren’t bloody well marrying a bloody stranger for someone else’s bloody amusement.

With that in mind, for this month’s 10 x 100, we asked 100 New Zealanders – selected because of their interest in the genre – some questions about reality TV.

We started with a deep philosophical conundrum: does reality TV make a positive or negative contribution to society?

The most common answer was “slightly negative”, with equal proportions of our cohort – about one in five – deeming reality TV’s contribution either “very negative” or “slightly positive”. A modest 13% reckoned it had no impact, with just 9%, presumably those who harness the laughter and joy brought forth by their favourite shows and use it for good, opting for “very positive”.

Reality TV is a veritable breeding ground for scandal, but which transgression hath shooketh us to our very core the most? We listed five of the most mind-blowingly scandalous events to rock NZ reality TV in recent years and asked our respondents to choose the most intense.

The Real Housewives racist bombshell, rightfully, came in first, with 43% selecting it as the most shocking. The next most common answer, at 30% – fittingly in a country bogged down in the mire of an ever-intensifying housing crisis – was four of the five houses on The Block NZ’s 2019 season not selling for profit.

Jordan Mauger flipping a coin to choose his lady love on The Bachelor – the revelation of which was a Spinoff scoop back in 2017 – garnered 14% of the vote, with Act leader David Seymour’s terrifying twerk display on 10%.

Surprisingly, just 3% chose 2015’s shocking shock-fest we like to call KillsMoongate as the most shocking reality TV scandal. Are reality TV fans’ memories that short?

Reality television has made celebs out of all kinds of ordinary New Zealanders. But who is the most beloved? We listed five stars and star duos and asked our group to choose their favourites.

The winner? Everyman hero Ben Lummis, New Zealand’s very first Idol back in 2004, with a sizeable 42%. Why is Lummis so beloved? It most probably has something to do with the fact that in 2018, a Critic Te Arohi interview, republished by The Spinoff, revealed that Ben Lummis was a fan of hummus.

Next up we asked our respondents to pick the best local reality TV host. It was a pretty tight contest, with The Great Kiwi Bake Off’s Madeleine Sami and Hayley Sproull deservedly taking top spot, but Apprentice host Mike Pero (described by one Duncan Greive as “very wooden“) and Bachelor winner-turned-host Art Green close behind.

Mike Puru (not to be confused with the aforementioned Pero), Green’s predecessor, managed just 14%, and The Real Pod favourite Colin Mathura-Jeffree of Hottest Home Baker fame sadly garnered just 10% of the vote.

While the golden age may have passed, New Zealand reality TV fans are spoilt for choice at the moment, with at least four locally made shows jostling for airtime.

But our respondents weren’t particularly impressed with any of them, as when asked which was the best, half of the hard-to-please group selected “they’re all rubbish”. The second most popular answer, but still gaining just 17% of the vote, was The Apprentice Aotearoa, with The Masked Singer NZ and Drag Race Down Under neck and neck on 12, and Popstars bringing up the rear on nine.

Sometimes it seems like everyone knows everyone in this godforsaken country, but apparently not, as only 14% of our lucky 100 said they were acquainted with someone who’s been on reality TV. (Don’t be jealous, but my fourth form Latin textbook was once in the possession of Joe Cotton from True Bliss – her name was in the front and everything. Audentes fortuna iuvat, I guess.)

Back to deep thoughts: how does watching reality TV make you feel, guys? This was a real mix, with the largest proportion of our respondents, 37%, ranking it 3 on a scale of 1-5, which one could interpret visually as 😐

Almost equal amounts went for 1 or 2, terrible or slightly above terrible 😫 (a total of 33), and 4 or 5, great or damn near great 😊  (a total of 34). Proof that reality TV really does contain multitudes.

In a deviation from the norm, we also presented employees of The Spinoff with the same question, asking them to respond on Slack with one of five emojis. The results in full, from the 24 responses:

Word cloud time! We asked our group what word they were most likely to shout at the TV when watching a reality show. The most common answer was “oh my God”, which is in fact three words. It was uttered by 15 of our respondents, plus there was one non-blasphemer who went for “oh my gosh”. Eight people opted for the simple yet effective “no” or “na”, with seven going for “fuck” (and one slightly more polite “f*cksake”). Eight said they were likely to yell either “idiot” or “idiots”, with other common answers including variations on “wow” and “yay”. Finally, we showed our group of 100 this picture and asked them who it was. 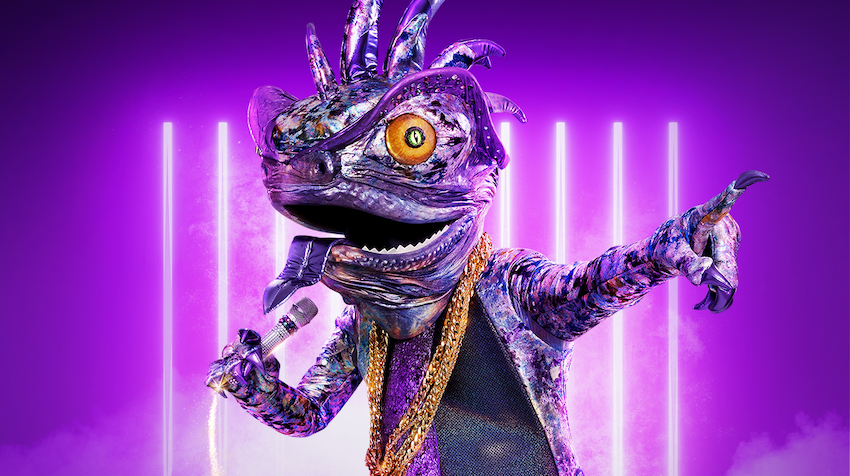 In case you’re not aware, dear reader, this is the Tuatara on local reality show The Masked Singer NZ. The premise of the show is a bunch of well-known New Zealanders, each clad in a different Kiwiana-themed costume, sing a song and judges guess who is beneath their costumes. Or something.

Our wise reviewer Tara Ward last week reckoned the Tuatara was either local crooner Jason Kerrison or local Nazareth man Jesus Christ. But what did our group of 100 think?

Disappointingly, a good 40% said “I don’t know” or variations on it (including “don’t know it’s ugly anyway” and “don’t know sorry purple dino?”), while a number correctly deduced it was a tuatara or a lizard. Another handful said it was “the masked singer” or “one of the contestants on The Masked Singer”. Eight reckoned it was Suzy Cato – wrong, Suzy Cato was the tūī – while one thought it was “the other Runga sister”.

One person said “angry monsta”, one said “ugly bug”, one said “my worst nightmare” and one said “angry cunt”. Another person thought it was Tom Sainsbury, another Ben Lummis (see question five), and one figured it could be our dear Madeleine Chapman.