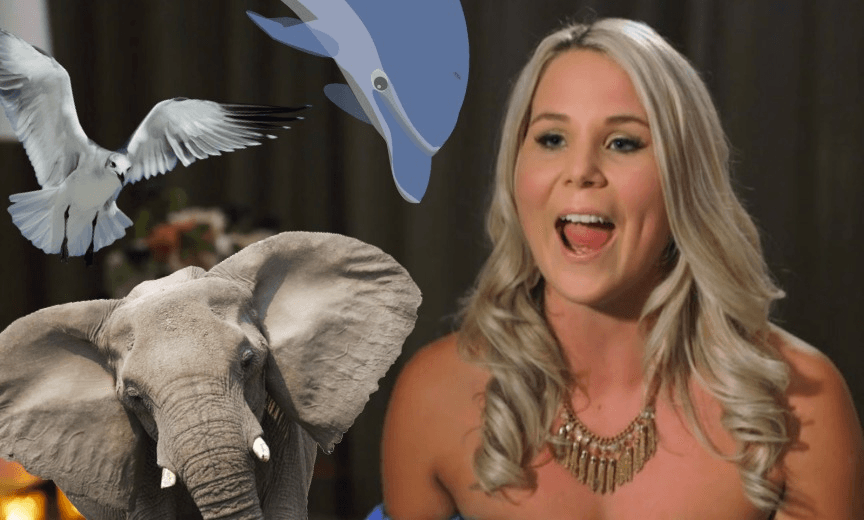 The Bachelor NZ Power Rankings – An elephant, a dolphin and a seagull walk into a mansion

Alex Casey tackles the sixth week of The Bachelor NZ, including tuk tuk tension, elephant dung and a dolphin in the mansion.

In a bold comparison drawn by Ally, spending time with Zac in Bangkok this week was like “winning a ticket to Willy Wonka’s chocolate factory.” Swapping out the everlasting gobstoppers for dried scorpions, and the Oompa Loompas for Dom Bowden in casual shorts, some prospered like Charlie Bucket and others were truly Augustus Gloop’d.

First there was Rosie, whose death rattle came in the form of a paper fortune teller:

And poor old Ally, who couldn’t even be saved by the sloth-embossed skin of her butt cheek:

There was a lot of wildlife action this week as the group date saw the women feed, pat and bathe a bloody herd of elephants. Here’s one thing I will never forget: the uncanny resemblance between a happy elephant eating pumpkin, Zac Franich, and the ‘extremely smiley’ emoji. Lovely.

Here’s who is left in the herd.

I’ve got one thing to say here: go the mighty larrikin. Lily threw herself – quite literally – into the elephant experience, elbow-deep in saliva like a reverse version of that gross bit in Grimsby. On their single date, they made some traditional Thai desserts together, which Zac was significantly rattled by.

After a few brightly coloured drinks and a romantic boat ride, Lily stopped doing pratfalls and started opening up a bit more. “I used to think I wasn’t an affectionate person,” she admitted, ‘but then I realised I had been holding the hands of douchebags.” Sealing it with a kiss, Lily might just take the total pancake.

Nothing says “romantic first date” like starring in this horrifying reboot of The Human Centipede:

Followed by getting Punk’d by Zac Franich after admitting to a fish phobia:

Much like the fortress Helm’s Deep from Lord of the Rings: The Two Towers, Sarah is NOT one to let her walls down easily. In fact, she’s only let them down twice in her life. After a whispered admission that she “might… like… Zac”, I predict we’re in store for bigger wall collapse than Berlin 1989.

Congratulations to Viarni for being the only women in Bachelor history to get your own soundtrack motif from Hans Zimmer. That’s a win in itself.

First of all, do read this if you haven’t already.

Second of all, Claudia pulled the best pumpkin move since Cinderella this week, earning one on one time with Zac via getting Mae Bae the elephant to like her.

Oh yeah, an elephant is picking the dates btw, because this is The Bachelor NZ where everything’s made up and Zac’s decision-making doesn’t matter.

If you like The Bachelor NZ, you gotta kayak over to The Real Pod, our weekly reality TV/real life recap podcast. Subscribe here on iTunes or listen below

This was also a goodie:

Here’s the Vanessa guide to staying on The Bachelor NZ every week: make no noise for weeks, then make EVERY SINGLE ANIMAL NOISE you can think of.

Despite her desperately trying to show her wilder side in the tense tuk tuk, the most Karina could muster was the revelation that she had ONE COFFEE THAT MORNING, as well as gently whispering that she wanted to maybe drive the tuk tuk. Hello crickets, my old friends.