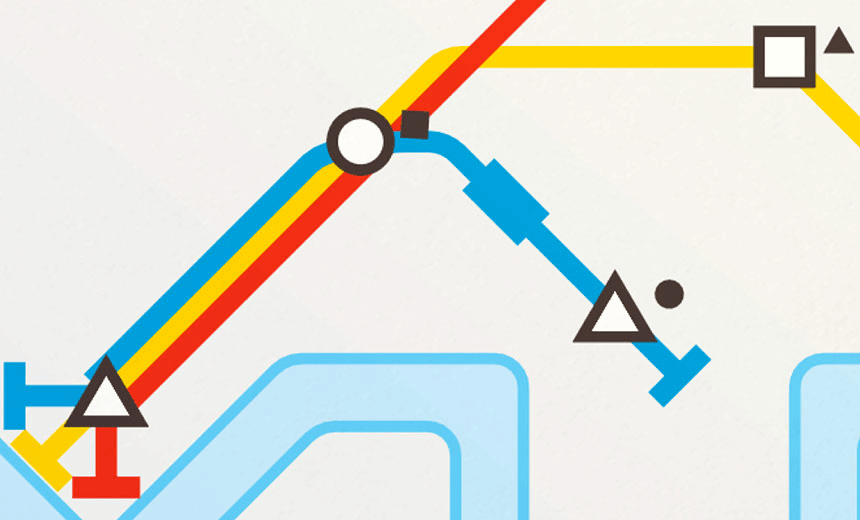 Each week Joseph Harper plays a different game that’s somewhat out of the ordinary. This week he gets his mitts on locally made Mini Metro.

My friend and local indie game aficionado Alice Gatland told me about Mini Metro. She basically implied it was the coup of the local indie game scene. So I obviously had to play it. Self-described as a “minimalistic subway layout game”, Mini Metro allows you to take control of the rail network in an increasingly bustling city. It’s basically the official game of Generation Zero.

Created by Wellington dev duo Dinosaur Polo Club, the kernel of the game came from a 2013 Jam and has since evolved into a world beating, urban design dream game. Your goal is to get passengers to their station of choice by building the most efficient route possible and using limited resources. The more people you transport, the better your score.

It’s exceptionally simple, but as the game progresses, the punters pile up and it gets really hard. You run out of tunnels. You’re in desperate need of an extra locomotive. The geometric passengers are getting antsy (read: jiggling about a bit). It all gets reasonably chaotic and becomes increasingly difficult to stop your lines resembling a disgusting, knotty mess. It’s fun.

A great feature is the way the passenger needs are randomly generated. This means you can play the cities/levels again and again and the game continues to feel fresh and challenging. The art is fantastic. Drawing clear inspiration from various subway maps of the world, it’s all clean colours and charming little shapes. A completed level looks like the kind of thing that wouldn’t be out of place on the wall of a Wellington Airbnb.

According to their twitter, the Dinosaur Polo Club team are still hard at work modding up extra content for their wonderful little game, so the Mini Metro line isn’t yet complete. At $11.99 on Steam, it’s definitely a mean deal that will pay for itself in hours expended. Highly recommended.

All this you see before you was made possible by good guy Bigpipe, the double decker omnibus of ISPs.