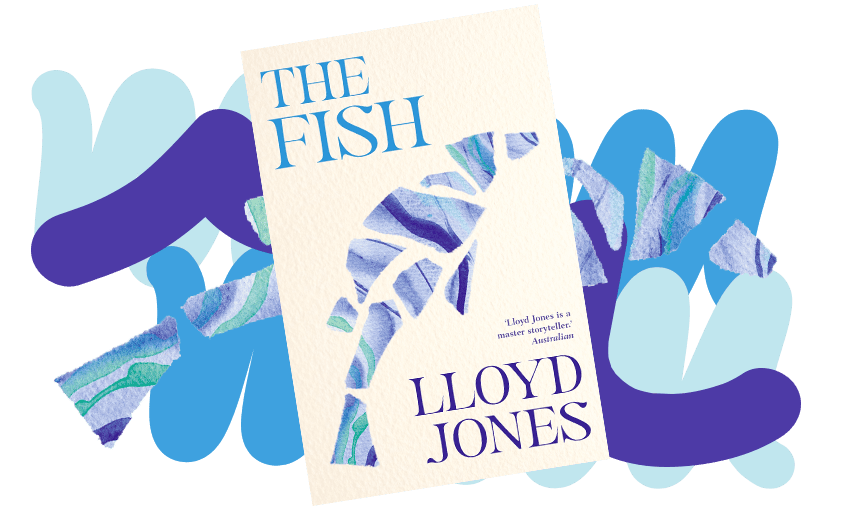 By Vincent O'Sullivan
Guest writer
Made possible by

Near the start of the Booker-shortlisted writer’s latest novel, a boy visits a beach caravan where his 19-year-old sister has given birth to a reeking, repulsive baby: the Fish. This is its story. But what does it mean?

“Fable” isn’t a word that immediately catches a contemporary reader, although it was one widely used of Lloyd Jones last novel, The Cage. It’s a word that tells us what we are reading is about something as well as the story it tells – a moral point of view, echoings that may surprise, that what seems like a fact may be something more expansive. Should someone ask what it is “about”, we might offer a precis of events, but that would be a meagre answer, and not do justice to it. With a writer as skilled as Jones, we need to add that his language often extends to so much more than he describes; that, like good poetry, it demands we attend to what it suggests, what hovers there, seemingly just out of reach. It can be like hearing a new piece of music we’re not at first sure about. Of course we’re not. Because we’ve not heard anything quite like it before. It’s asking us to go beyond cosy expectations. As a reader, there’s an excitement with that, even if the puzzle remains.

Early in The Fish, we know the story is set in New Zealand suburbia, and a clue tells us precisely when. The movie Dr Zhivago is currently showing in the cinemas, so this is the summer of 1966. The characters live in Wellington, close to the sea. It is a decade we tend to look back on with a mild condescension.

This was Kiwi life at its most “ordinary”. This was mum and dad in an ordinary house, there was a craving for security, there were few tentative dabs at sophistication. This is what a generation after the War wanted, after all – just don’t bother us with anything that upsets. Apple carts are very difficult things to come by, so don’t risk tipping them. Time in the novels zig-zags round a bit, but the kind of lives it touches on stay very much in that period. What can’t be avoided, is when inevitably sex raises an ugly head. (As the Mazengarb Report 10 years before had assured us it would.)

As far as the events of the story go, sex is covert, nasty, lawless, the one thing sure to mess up lives. It would be easy to take one reading of the story, which I’m putting aside, that could turn it to a yet darker tale of incest. I could not believe the publisher’s blurb of The Fish that found it a tender family story. One sister becomes “a ship girl”, the other, with more smarts, finds success overseas in “professional girl friending”. And of course it is from a mangled sex life that we get to the title of the book, and the child – Shakespeare offered a handy line as it came to mind  – “sent into the world before my time, scarce half made up”. How it survives, how it is regarded, how it swims into and out of events, carries the fable. And note, its pronouns are always “it” and “its”.

By now anything like run-of-the-trade realism is left well behind. We never know for certain what the Fish thinks, what it looks like, any more than we know what, in the fable it swims in, quite what it means. All we are certain of is that it is central to whatever happens to the family, as the story variously drenches us in compassion, puzzlement, confusion, loss. There are distant texts drifting about in the current we’re caught up in. Moby Dick glides by. So does Robinson Crusoe. You’re unlikely not to think of Kafka’s famous changeling. More than once, the Fish’s siblings are referred to as crabs, its grandmother as a cockroach. As much as Ahab, we’re on a quest we don’t fully comprehend, fingering a code that obsesses but eludes us. The quest takes us through some compelling incidents, spare but memorable imagery, and the best writing about the Wahine storm I have read.

I expect many of us remember the excitement, and the shock, when as children we first saw the image or a model of an embryo. Just how it looked anything but human, at the same time as it unmistakably was. A tadpole may have been the closest we had come to that enormous head, those tapering limbs. There may have been that appalled fascination, to learn that on the way to being ourselves we had passed though being other things as well. Most of all, how like fish we had to be on the voyage out. I remember a curious moment of adult discomfort, as a doctor once felt my neck, and remarked on where my gills would have been.

So the Fish is what we were then, what we have absorbed into ourselves? No problem with that. But what if this is also what we still are? Alien, other to ourselves. Jones always has seemed to me a writer inescapably compassionate. “Nothing that is human is alien to me,” as the Latin tag goes. Is the Fish us, when we don’t want it to be? At our weakest, our most unattractive? Perhaps. Jones is masterly on human weakness, on what goes wrong with us. On how hard it can be to get things right. This is a story that is heard, as it were, through half opened windows, put together in events the characters themselves are confused by, the human tangle at its most elusive, where hints and nudges and guesses are worked overtime. It is about, most certainly but not only, how people are to be saved, against the odds. If some don’t make it, others do. If the Fish is dead, others may survive because of it. The foundering of the Wahine makes that very clear.

The end brings us back to what is so much a mark of Lloyd Jones’s constant questing about for how something is to be told, but not in a way that’s been used before. So often it has struck me, how his sense of the writer’s calling is the lodestar in so much of his work. Part of this is to take his readers seriously, to assume they will accept their part in this business of “fiction”.  As much as with Mr Pip, writing itself is floated as redemptive.

On the last page of The Fish, the narrator, leaving the caravan where so much of the story has been set and where we now find out it was written, looks out to the country which is his, his family’s, ours: a place of “baffled sheep and a restless wind.” You don’t have to push symbolism too far to take that caravan as a womb, where things are put together, where mistakes happen. In the last sentence, as he comes from his writerly cocoon, “I heard a beast confined to a pen in the hills some distance away and I wondered if, in fact, it was my groaning relief that I heard. Then I began my own uncertain walk back out into the world.”

In a fiction shot through with the fellowship of other writers, one can’t help but hear, in that final sentence, Ishmael’s lift from Job in the most myth-laden of novels – “And I only am escaped to tell thee.” I imagine Janet Frame not too far from the story’s relentless demand that we look at ourselves, at what we don’t and can’t fully understand. The Fish is in the same country as her own unrelenting riffs on what we are. Only with Jones, there is so much more humanity, so little of her delight in punishing us for what can’t be helped.

The Fish by Lloyd Jones (Penguin, $36) is available from Unity Books Auckland and Wellington.