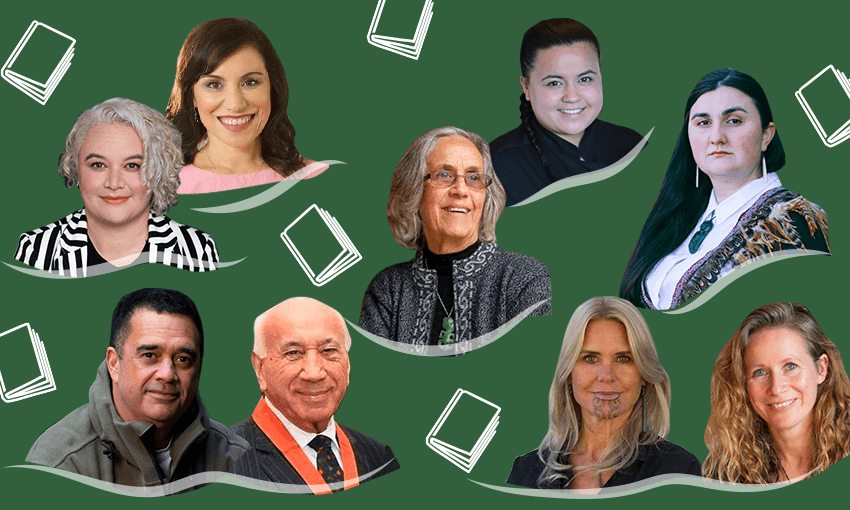 Just a few writers who will appear at Kupu Festival (Image: Archi Banal)

By Shilo Kino
Guest writer
Made possible by

A new Māori writers festival is coming to Rotorua next month that has significance for Māori past, present and future, writes Shilo Kino.

Imagine welcoming in the new year by sitting at the foot of Dr Rangi Mātāmua at Te Tākinga Marae. It’s 2022 and Matariki is a public holiday in Aotearoa. The man who uncovered his grandfather’s journal and then gave us back Matariki, is now speaking to you about it. As the late Dr Moana Jackson once said, “the telling of new stories begins with the identification and ‘un-telling’ of colonisation’s past and present lies.”

Imagine hearing this kōrero and then going down the road to Rotorua library to hear from Patricia Grace. A trailblazer who decolonised literature, who held the fort as one of the only Māori wahine in a white literature space for decades. And, at 84-years-old, she’s not stopping. Her memoir was recently nominated for an Ockham and the film adaption of her pukapuka Cousins is now streaming on the world’s most popular streaming service.

If that’s not enough, Whiti Hereaka (who won the biggest book prize in the country last week for her book Kurangaituku), will adorn you with words. Te reo Māori advocates Stacey and Scotty Morrison will gas you up on your reo journey so you can carry on restoring your language back into your whānau. Afterwards, feast on indigenous knowledge with Qiane Matata-Sipu, Dr Hinemoa Elder and Dr Ngahuia Murphy, and imagine decolonisation with our leading Māori academics and storytellers. Oh and there is poetry with Ruby Solly!

It feels like a dream, but what I’ve just described is not even half of the programme lineup for Kupu Festival, the first Māori writers festival of this scale, being held in Rotorua from June 12 to 19. When I first received an email about it from organisers Robyn Bargh, I had a hīnawanawa moment – goosebumps – because this is what we have all been waiting for. Celebrating some of our greatest writers from the past, present and future, in a space that reminds us of the power of being Māori.

Last year I wrote an article expressing my frustration at how white and privileged writers festivals are. (The headline says it all. ​​Wanted: A writers festival beyond the white and privileged.) I was told this article inspired the Kupu Festival but I want to point out that I wrote nothing new. There are many Māori doing amazing mahi and often behind the scenes (a lot more than just writing a rant online lol).

I shared my experiences of growing up as a lover of literature and not knowing literary events like The Auckland Writers Festival existed until I became an adult. I attended my first festival and it was the same feeling as when you walk into an office, a school, a pharmacy – often unsafe spaces – where you don’t know if the person behind the desk or counter is going to be in a good mood or a racist mood. I felt uncomfortable but the main takeaway was that writers festival are curated with one audience in mind – the white, rich and privileged.

And then my dream came true and I became an author. I spoke at a festival but when I looked out into the crowd, I saw hardly any of my own people looking back at me. I went home and questioned my life purpose and if it really was a dream come true. If my stories, my book or my kōrero wasn’t reaching the people who I want it to reach – Māori – then what was the point?

Robyn Bargh is one of the board members of the Kupu Festival and has spent her life building Māori literature in Aotearoa. The old lie that Māori aren’t readers or there aren’t enough Māori writers can be put to rest because as Bargh puts it, “There are so many Māori writers that we can’t fit all of them in the programme.”

Sorry, what? There are so many incredible Māori kaituhi and storytellers that it was impossible to fit them all into a week-long programme? So why has something like this not happened sooner? There’s also the lie that Māori don’t go to literary events. So far, the day pass for Saturday has sold out. Single sessions are still available but selling fast, which shows there is a huge audience for literary events like this, but only when it is done the right way.

Toni Morrison said if there is a book you want to read and you cannot find it, then you must write it. I’ve only got 60 years of life left to live (and that’s if I’m optimistic about beating the Māori life expectancy rates) and truthfully there are so many Māori stories I want to desperately read but 60 years is not enough time for me to sit and write them all.

When I was younger there were two Māori authors – Patricia Grace and Witi Ihimaera, and I was always expected to connect with their stories just because they are Māori. If you are Pākehā, do you connect with a Pākehā story just because both your ancestors come from England?

Privilege is when you go to a library and think “what do I feel like reading?” and then you pull out every book with a character that looks like you and sounds like you but you decide you don’t connect with that story. So you look for something more specific that fits your needs and you will probably find it. Having that choice is a privilege not many of us have.

A festival like this gives Māori the power of choice, to sit among a range of our very best storytellers, and pick out who we might connect with based on their likes and dislikes and passions and not just because we come from the same culture.

“Show a people as one thing, as only one thing over and over, and that is what they will become.” – Chimamanda Ngozi Adichie

But show our people options and choices and diversity within our own culture and we will no longer believe the stereotypes that have been imprinted on us by Pākehā storytellers for so long (wtf is a warrior gene?) We will stop saying we have “imposter syndrome” and recognise this is a colonised whakaaro. Most importantly, we won’t be afraid to dream.

Festivals like this have the power to spark dreams and aspirations within our own people. For example, if Dr Rangi Mātāmua can bring back Matariki, then maybe there’s something that’s been lost within my own iwi I can restore to the world? If Qiane can self publish an Ockham-nominated book about indigenous wāhine, maybe I can have publishing sovereignty too? If Whiti Hereaka and Becky Manawatu can win the biggest prize in literature, maybe I can too one day, or even win the biggest literature prize in the world? If Dr Hinemoa Elder can be our only Māori child psychiatrist specialising in traumatic brain injuries, and then write a book about whakatauki that appears in the Oprah book club while in her 50s, maybe I can too?

As one of our greatest storytellers of all time once said:

“Dare to imagine something new. Being brave is just the deep breath you take before you start something difficult.” – Matua Moana Jackson