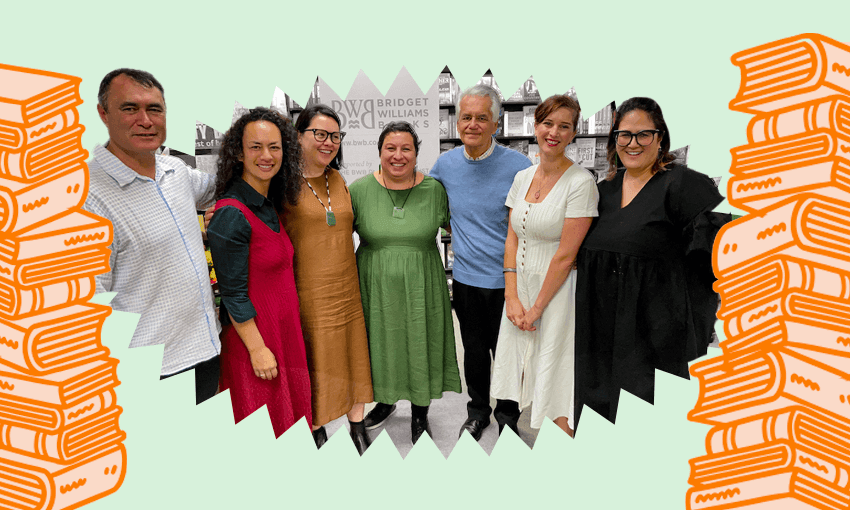 A cornucopia of coverage is available to you right on this here Spinoff: a special edition of the Gone by Lunchtime podcast; a write-up slash review (by Toby Manhire) of same; an excerpt.

“It has been several weeks since I finished it. Allow me to say:

“For three decades the South African writer Damon Galgut has been assessing his country through scrutiny of its white people. His prior novels include the Booker Prize finalist The Good Doctor, set at a clinic in one of apartheid’s forlorn ‘homelands,’ and The Impostor, an account of a poet self-exiled to the lonely countryside. Galgut’s new work, The Promise, studies the Swart family, descendants of Voortrekker settlers, clinging to their farm amid tumultuous social and political change – ‘just an ordinary bunch of white South Africans,’ he writes, ‘holding on, holding out.’”

Instead of a bio on the Penguin website, Clear has a bunch of numbers:

“James Clear is an expert on habits and decision making. He made his name as the author of one of the fastest-growing email newsletters in history, which grew from zero to 100,000 subscribers in under two years. Today, his newsletter has over 400,000 subscribers, and his articles at jamesclear.com receive 10 million hits each year. His work frequently appears in publications including the New York Times, Forbes and Business Insider.”

A warm welcome home to Kura, who’s been off these lists for a little while waiting for a reprint.

6  The Invisible Child: Poverty, Survival and Hope in an American City by Andrea Elliott (Hutchinson, $40)

For eight years a New York Times reporter followed a young girl growing up poor in Brooklyn. She just won a Pulitzer for it. Here’s an excerpt:

“Even Dasani’s name speaks of a certain reach. The bottled water had come to Brooklyn’s bodegas just before she was born, catching the fancy of her mother, who could not afford such indulgences. Who paid for water in a bottle? Just the sound of it – Dasani – conjured another life […] Dasani shares a twin mattress with her closest sister, Avianna, whose name was inspired by the pricer Evian brand of water.”

Blurb, in part: “One year after the death of his beloved musician father, 13-year-old Benny Oh begins to hear voices. The voices belong to the things in his house – a sneaker, a broken Christmas ornament, a piece of wilted lettuce. Although Benny doesn’t understand what these things are saying, he can sense their emotional tone; some are pleasant, a gentle hum or coo, but others are snide, angry and full of pain.”

The BookTok-driven resurgence rolls on.

The Booker Prize committee, on longlisting Ishiguro: “What stays with you in ‘Klara and the Sun’ is the haunting narrative voice – a genuinely innocent, egoless perspective on the strange behavior of humans obsessed and wounded by power, status and fear.”

Look closely at fungi, writes the Guardian reviewer of this 2020 nonfic hit, and you’re hit with “large, unsettling questions.”

“Merlin Sheldrake, a mycologist who studies underground fungal networks, carries us easily into these questions with ebullience and precision. His fascination with fungi began in childhood. He loves their colours, strange shapes, intense odours and astonishing abilities, and is proud of the way this once unfashionable academic field is challenging some of our deepest assumptions. Entangled Life is a book about how life-forms interpenetrate and change each other continuously. He moves smoothly between stories, scientific descriptions and philosophical issues. He quotes Prince and Tom Waits.”

From the blurb, a work of art in itself:

“Eddy Smallbone (orphan) is grappling with identity, love, loss, and religion. It’s two years since he blew up his school life and the earthquakes felled his city. Home life is maddening. His pet-minding job is expanding in peculiar directions. And now the past and the future have come calling – in unexpected form.

As Eddy navigates his way through the Christchurch suburbs to Christmas, juggling competing responsibilities and an increasingly noisy interior world, he moves closer and closer to an overdue personal reckoning.”

3  You Probably Think This Song Is About You by Kate Camp (Te Herenga Waka University Press, $35)

“Most people who do IVF don’t get pregnant, but you don’t hear about that much. Every story you hear is about how awful it was, how difficult, how the embryos died and the sperm wasn’t viable and the relationship was strained and then, and then, it happened, and here they are, with their miracle baby, their miracle family. I never understood the true meaning of love until I had children. It’s something people say all the time. And I always think Yeah, fuck you too.”

4  Aroha: Māori Wisdom for a Contented Life Lived in Harmony with Our Planet by Hinemoa Elder (Penguin, $30)

Elder has a second book coming in October ie to your Christmas stocking. Wawata, Penguin promises, “shows us how to reclaim intimacy with others, with ourselves, and with our planet, using the energies of Hina, the Māori moon.”

The Guardian, in raptures:

“Every now and again, a first novel appears in a flurry of hype and big-name TV deals, and before the end of the first chapter you do a little air-punch because for once it’s all completely justified. Lessons in Chemistry, by former copywriter Bonnie Garmus, is that rare beast; a polished, funny, thought-provoking story, wearing its research lightly but confidently, and with sentences so stylishly turned it’s hard to believe it’s a debut.”

“She wonders how none of her colleagues noticed what a mess she was; well, they would have, but you can make up for a lot with a lilt and a laugh and a wardrobe of Miss Crabb. Also: addicts lie” – us, in a Dracula-heavy review a while back.

A novel about, you’ll never guess…

10 Regenesis: How to Feed the World Without Devouring the Planet by George Monbiot (Allen Lane, $37)

Does this placement have anything to do with the fact we raved about Regenesis in our latest Book Report? Maybe! “Science that reads like hope,” we said.