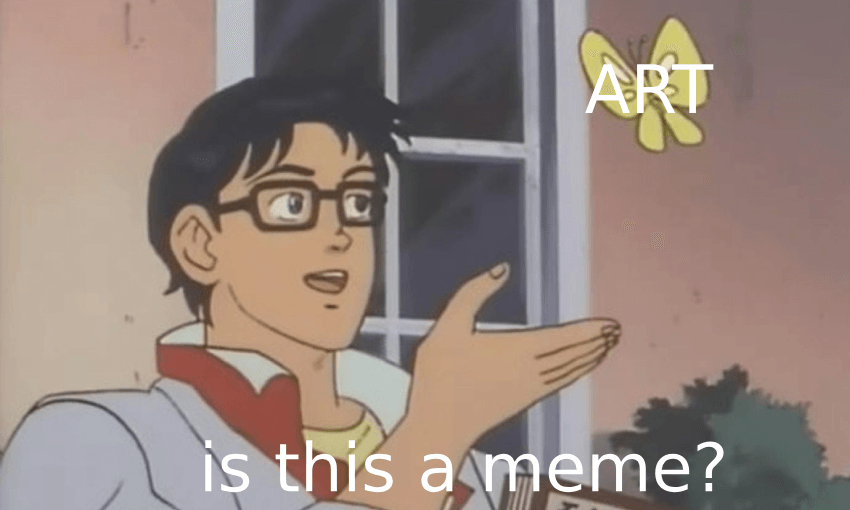 Stop ripping off artists’ work on the internet, you thieving dogs

Posting your art online is a no-brainer: it’s a gallery and marketing all in one. It’s also a cesspit of digital thieves. Josie Adams spoke to three artists about theft online.

Ardie Savea has just changed his Twitter profile picture to a drawing by Toby Morris. Morris is stoked the rugby player likes his work, but notices he got no credit for the image. “It’s cool, but that would have been cooler,” he says.

Every week, Morris gets another alert: his work is doing the rounds again, usually the comic “On A Plate”. His work might be translated (fine) or have the words changed to something objectionable (not fine).

Morris is well-known, but despite having a recognisable style and name, he regularly sees his work appearing on Twitter, Facebook, and Redbubble t-shirts without attribution.

He’s not alone. While sculptors and other fine artists still exist in the real world, many of today’s creatives operate online. Illustrators, animators, and photographers increasingly rely on digital tools and digital methods of dissemination. This opens them up to theft; you wouldn’t steal a car, but you’d probably torrent one if you could.

Art on Instagram and Reddit is easily downloaded. While artists understand this and are cool with it, for the most part there’s a social obligation to give credit that seems missing. “There’s etiquette to it,” said Morris. “There’s being ripped off and then there’s a social etiquette on how to use shit considerately.” Being ripped off – seeing someone profit off his hard work – results in a stern email from Morris.

Animator Dan Lester learned he could be profiting from his work when someone else did. A month ago, he received an email. “Hey Dan,” it read, “I want to talk to you about something real serious that’s happening to this video of yours.”

Someone had ripped one of his videos, recorded a new voiceover, and won a competition with it – in Nepal. The email had been sent by another competition entrant, who had lost out on the prize of NZD$2,000.

The original video has a voiceover by Lester and fellow artist Silvia Razakova. The copycat removed the audio and replaced it with a lower-quality recording of himself reading the same script.

Lester engaged with the emailer, the competition’s organisers, and even the culprit – all of whom were desperate to sort out what had happened because of the money involved. It was so convoluted that Lester didn’t even stop to think that his art had been ripped off. “For a while I thought maybe it was a long scam,” he said. “But in the end it seemed like this guy had totally scammed them by entering it.”

The prize money was passed on, and Lester came out of it with a conciliatory offer: “If you ever happen to be in Kathmandu, contact us. IAE Nepal would like to buy you a pint of a local beer,” said the organisers. “A long neck.”

Not everyone comes out of digital theft unscathed. Auckland-based photographer Richard Parry had one of his images traced by a tattoo artist and offered as a giveaway. “When I contacted her to ask “hi, nice to meet you, what the fuck?” she became very defensive,” he said.

His friends left comments on the tattoo artist’s post explaining the work was stolen, which meant when he was eventually credited by the artist it backfired on him. She cancelled the giveaway, claiming harassment.

“Over the next week I was flooded with death threats and honestly pretty mean DMs because I had ruined these people’s chance of getting a free tatt. Since then [the page] has pulled this crap a few more times with other local artists.”

To Parry this is theft, cut-and-dried: “this person is a dick and I hate their guts.”

His work has also been extensively memed. His image of a comically over-stuffed avocado sandwich ended up on the Instagram account @ShitHeadSteve. “A representative who I cannot confirm was the real Shit Head Steve reached out and asked if they could use it with credit. I said they could, so they tagged me in the comments and slapped their logo right across the top of the picture.” The comment was buried and @ShitHeadSteve’s logo was slapped across the image.

Meme culture is a grey area for almost everyone involved: consumers don’t think twice about who created the content, and content creators feel a bittersweet flattery. The only party that can make an ethical choice is the distributor: if they’re making money off the image, that’s when artists will kick up a stink.

“Some of these big meme accounts are monetising sharing other people’s work and hiding behind the idea ‘it’s just a meme bro’. @FuckJerry is a good example of this, they basically just steal stuff for a living and make millions off of it.” If you want to enjoy @FuckJerry’s content guilt-free, check out @MugJerry.

Morris is also only occasionally bothered by meme-ification of his work. “It’s stealing your shit, yeah, but it’s not with no gain.” A little post on social media or a comment on the piece and you can get new fans, and hey – clout is the new Bitcoin.

For all three artists, the concern with online theft isn’t profit. They just want to be credited.

“All this tagging and reposting and social media dramatics sound a bit pathetic,” said Parry, “but this work really does take hours of planning, shooting and editing.”

Similarly, Morris said the social media rigamarole is a necessary part of getting his dues. “If they have zero followers, I ignore it. It would bring more attention then it would have otherwise,” he said. “If it’s someone big, I’d probably do a call-out post.” Is this more effective than legal action?

In short: yes. “I can’t think of many cases where it would be worth the time and money [to speak to a laywer],” said Morris.  “Usually they’ve done such a shitty job of [modifying it] that it’s clear it’s not me, anyway.”

“You need to serve them with legal documents,” said Parry. “How the hell do you find the personal address of someone who runs an Instagram account? Where is the real @FuckJerry? It seems cost-prohibitive.”

At the end of the day, can anyone really own art? Both the New Zealand law and a Nepalese video competition say yes, they can.