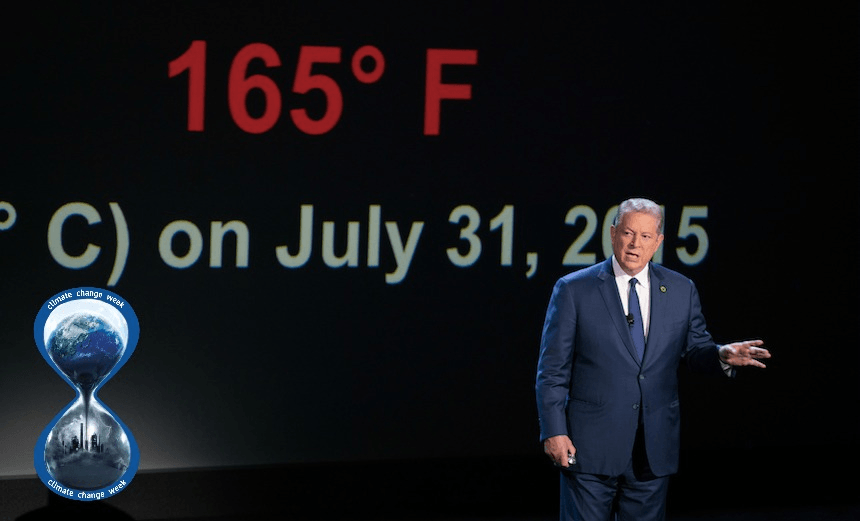 The inconvenient reality of being Al Gore

Climate change is the defining challenge of our times. The Spinoff is devoting a week of coverage to the issue, its advocates, complexities, and solutions. Climate Change Week at The Spinoff is brought to you by An Inconvenient Sequel, Al Gore’s new movie and, says Simon Wilson, it’s not entirely what you might expect.

Al Gore is not a happy man. Who would blame him? But still, it’s a shock, watching his new movie, to discover just how true this is. It was hard enough being Bill Clinton’s vice president, and far harder losing the presidency, to George W Bush of all people, on a dubious Supreme Court decision. But none of that comes close to the difficulty of fighting the political battle of our time. He’s exhausted. Worse, he’s disillusioned. Climate change is so hard. He’s done in.

This is clearly not the narrative Gore and the filmmakers expected to tell when they began this movie.

An Inconvenient Sequel (yes, there’s a pun in the title) has two overlapping story arcs. The first, the one they started with, is the countdown to the climate change summit in Paris in December 2015, known as COP21. (COP is “Conference of the Parties”.) The second is the rise of Donald Trump.

Paris was important. There’s a COP every year but the previous big one was COP15, in Copenhagen in 2009. It failed. If the same thing happened in Paris, catastrophe beckoned. Not just because global warming would accelerate, but because the will to prevent it would have been badly beaten. Gore was not the only campaigner facing burnout.

Paris threatened, in the language of crisis, to be a tipping point. Fail there, Gore and many others believed, and global warming might become unstoppable.

The movie’s good on the drama of this, as Gore meets, cajoles, negotiates, pleads and does his best to inspire his way around the world, intermittently sunk in an armchair or staring at another report as if he can’t remember the language it’s written in. For long stretches, there’s no good news. It’s a war and this is a report from the trenches.

The movie’s also good as a climate-change primer, if you’re looking for dinner table talking points or tweetables. There’s a bell curve of global temperatures 1951-1980 that has been pushed all out of shape: most days now are hotter than the hottest days of that not-so-long-ago genteel time. Summer rain has become rain bombs; whole populations are on the move. War isn’t just a metaphor: climate change causes much of the warfare the world knows now.

The movie’s strong on some of the politics. The biggest problem facing the developing world is credit. Read that another way: their problem is our banks. Mind you, the movie also makes clear that western corporates, some though obviously not all, have moved into the forefront of the campaign.

And at the same time, for politicians everywhere, it’s gone in the too-hard basket. “To fix the climate crisis we have to fix the democracy crisis,” says Gore. But how do you do that?

Gore comes at it two ways. One, focused on in the movie, is the systematic approach of his organisation to training educators and activists who will then train others. Amway selling, applied to the cause, and by movie’s end they’ve done 12,000. It’s smart.

The other is the way he wields his own power. As the Paris conference gets underway Gore rings up tycoons and gets them to donate, talks to presidents and prime ministers and they listen. He’s still a big guy and he finds ways to help them solve their problems so they will help him with his. The dejection fades and can-do positivity takes over. He rouses himself and it’s impressive.

But then along came Donald Trump. Paris went so well, and at the time it still looked like Trump would remain a joke. Gore shoulders the burden, barrel chested and forlorn, looking for signs of progress. He goes to Georgetown in Texas, the Trump-loving “reddest town in the reddest county” that also happens to be 100% powered by renewable energy. That ain’t bad. Actually, as he also notes, Texas as a whole ain’t so bad. More solar power is now generated there than what they get from oil. America is changing even if its president is the biggest threat to the climate change campaign in the whole world.

It’s great, this movie. Not an eye-opening educational tool like its predecessor, or not only that, but also a personal journey, laced with sadness as it struggles, determined, to deliver hope.

“All social movements,” Gore says, “eventually resolve into right and wrong.” History is on his side, even if time may not be. He clings to that, and invokes Martin Luther King: “How long? Not long.” Say it in a ringing voice.

Paramount Pictures and The Spinoff have 50 in-season double passes to An Inconvenient Sequel. To get yours, email your name and address to ashleigh@thespinoff.co.nz. Offer available while stocks last. Update: This giveaway has now closed.

The ETS is ready to reduce New Zealand’s emissions

So far our ETS has been deemed largely ineffectual by low-integrity overseas credits and low emission prices. Catherine Leining believes recent global and local changes mean the ETS can do its job - if we are ready to get serious about reducing New Zealand’s own emissions.
By Catherine Leining
Guest writer
16th August, 2017

Covering climate change: journalism’s biggest and most difficult story, ever

Climate change is the defining challenge of our times. The Spinoff is devoting a week of coverage to the issue, its advocates, complexities, and solutions. Today, five journalists discuss the complexities and importance of covering climate change.
By The Spinoff
Staff writers
15th August, 2017

‘We only have one planet’: Dr Jan Wright on saving the one thing we all have in common

Climate change is the defining challenge of our times. The Spinoff is devoting a week of coverage to the issue, its advocates, complexities, and solutions. Climate Change Week at The Spinoff is brought to you by Al Gore's An Inconvenient Sequel. Today Don Rowe talks to departing Parliamentary Commissioner for the Environment, Dr Jan Wright.
By Don Rowe
Contributing writer
14th August, 2017

The inconvenient reality of being Al Gore

Al Gore has a new movie and, says Simon Wilson, it's not entirely what you might expect.
By Simon Wilson
Senior Writer, NZ Herald