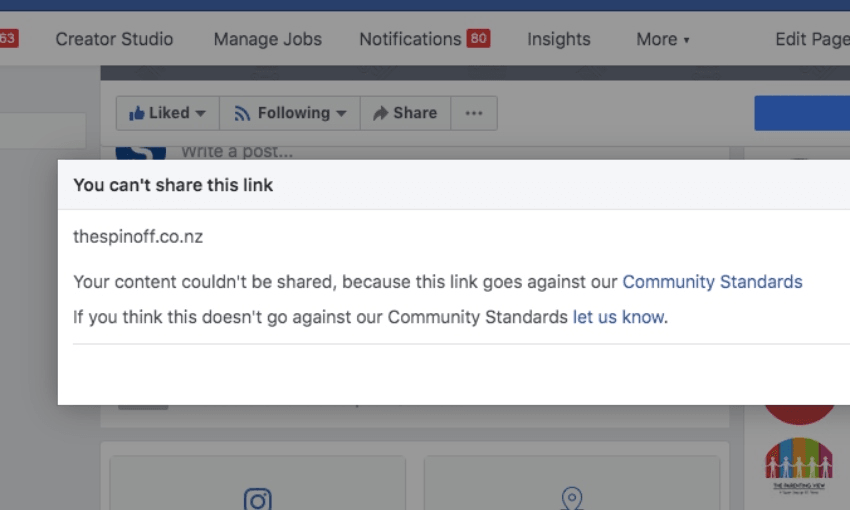 The Spinoff has seen all current Facebook links removed from feeds, tagged as ‘inappropriate content’ or violating ‘community standards’, at the height of the Covid-19 epidemic.

This appears to be impacting news organisations worldwide, with USA Today, Politico and the Atlantic all affected. White House reporter for CBS News Kathryn Watson tweeted about a post from the Dallas Morning News being taken down, criticising the social media company’s actions. “Facebook allows misleading information to spread but almost immediately takes down the sharing of a trusted news source? There was nothing offensive or misleading in my post. We need more good information, not less.”

The issue began shortly before midday NZT on March 18, and has impacted not just news sites, but users wanting to share their content. “They’ve definitely taken down my posts on my personal page that contained Spinoff articles,” wrote one Twitter user. Currently the only posts showing up on The Spinoff’s page are video stories from weeks ago.

The Spinoff has approached Facebook in Australia to alert them of the issue, with a spokesperson confirming multiple media outlets had contacted him in the previous few minutes.

The timing is disastrous for Facebook and its users, as the platform has been a key source of information throughout the Covid-19 crisis. The Spinoff has seen triple its normal traffic in recent days, driven in part by the huge social media response to stories by microbiologist Siouxsie Wiles, often illustrated by The Spinoff’s Toby Morris.

As of writing, all her stories are unavailable and unshareable on the Facebook platform, and The Spinoff’s traffic has halved since the ban went into effect. Wiles’ most recent post, giving information about Covid-19 testing, has plunged from averaging 68 views per minute prior to the ban, to 24 views per minute since.

The Spinoff’s Facebook inbox has been inundated with messages from readers inquiring about why posts are down. One message came from Rebecca, who was confused about why an article written by Wiles was now being flagged as “inappropriate material”.

Alex Stamos, former chief security officer at Facebook, has suggested it’s a technical malfunction amplified by moderation staffing issues. “It looks like an anti-spam rule at FB is going haywire,” he tweeted. “Facebook sent home content moderators yesterday, who generally can’t WFH due to privacy commitments the company has made.”

The issue does not appear to be impacting either Stuff or the NZ Herald, both of which have published stories to Facebook in the past five minutes.

Update, 1.11pm: The Spinoff’s Facebook access has been restored, though users are still reporting issues. Antonia Sanda, Head of Communications, New Zealand said in a statement: “We’ve restored all the posts that were incorrectly removed, both related to COVID-19 and not. This was an issue in our automated systems to remove spammy links from being shared on Facebook.”