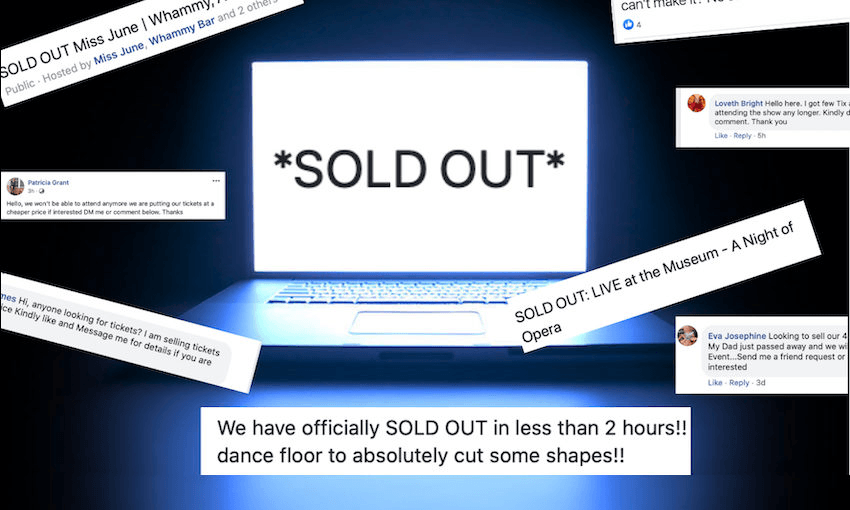 How to avoid the spike in ticket scamming as online bots target local gigs and events!?

Ticket scam bots are infesting Facebook. What happens when you chat to one?

How to avoid the spike in ticket scamming as online bots target local gigs and events!?

As one of the few places on earth where live events are still taking place, New Zealand is seeing its Facebook events pages overrun by scammers trying to trick fans out of cash. Sherry Zhang explains how it works, and shares her own exchange with a ticket scam bot.

Ticket scams? Bots? What’s all this about?

Imagine this: you’re scrolling through Facebook and spot a gig tomorrow night featuring your favourite shoegazing long haired musos. But you’ve seen it too late – it’s already SOLD OUT. You’re about to give up when a dozen comments pop up offering to resell tickets. They all seem normal at first. They’ve got profile pics with their kids, even wedding photos. Plus the gig’s on tomorrow night, so worth a shot, right?

But then things start getting weird. There are strange gaps in sentences, they’re evasive about sending proof of purchase, and seem really pushy for your Paypal details. Who even uses Paypal?

According to Netsafe’s Martin Cocker, “almost every scam type is up from the usual numbers” in the wake of the Covid crisis. And so while ticket scammers have always existed, gig promoters are noticing a surge in NZ events being targeted by online ticket scamming bots. They can appear as comments from fake Facebook profiles offering ticket resales, or even as fake event pages.

Gus Sharp, director of club promotions collective Friendly Potential, thinks that the bots may automatically search for posts with keywords such as “sold out”.

Hold up, what’s the deal with these bots?

Bots (internet robots) are able to replicate, clone, and complete high volumes of activity online. This includes making social media accounts that look human and sound… kind of human, and posting lots of content. There have been tremendous improvements in AI technology in recent years – think of the little pop-up question boxes on websites that ask if you have any questions. So friendly, so sweet. However, “the things used to improve our life are often co-opted by criminals to try and harm us,” says Cocker.

Comments from bots can be simple:

(Gym buff ‘Kevin Miller’, who lives in Houston, Texas, has somehow got his hands on tickets to a gig at K Road’s Whammy Bar)

Or they can really pull on your heartstrings:

(What a shame that sweet grieving 60-something ‘Eva Josephine’ won’t be able to attend the piss-up fest that is the University of Auckland Law, Medicine and Engineering Students Stein)

You mentioned fake event pages too?

According to Taylor MacGregor, who runs Auckland gig promotion company Moral Support, he’s had to take down five fake event pages for a single (real) upcoming gig so far. These pages will often contact venues to accept them as hosts in order to become platforms for ticket scammers.

Is this affecting all events?

According to Sharp, small to medium sized events have so far been the main targets. When it comes to large shows – like, for example, a $150 Adele gig – consumers are more likely to conduct due diligence and scammers are aware that ticket agencies like Ticketmaster have their own resale platforms. It’s also pretty clear that in these times, Adele is not embarking on an international tour. But when it comes to a $15-20 gig at your local pub, it’s much easier for bots to pose as genuine sellers.

What does this mean for having fun in NZ?

Other than the disappointment, frustration and loss of money for those who have been scammed, Facebook bots are jeopardising the ability of gig promoters to reach their audiences.

Gig promoters say they’re seeing an increasing number of people miss out due to being scammed, creating even more stress for a local industry still reeling from the effects of lockdown.

That’s all pretty stink. So how do I avoid getting scammed?

The best way to avoid falling victim to bots is to know how they operate. While bots are polite, they’ll give generic answers and avoid answering any real questions. MacGregor says that the fake event pages he’s seen often have the wrong dates and strange descriptions – one of them offered to sell 300 more tickets than the venue could hold. If something looks off, double check before parting with your cash..

There’s more you can do to be safe. Especially for local events, check if you have any mutual friends with the seller. Do a bit of digging, and be extra suspicious if they are selling more than two tickets. Sharp suggests avoiding any sellers who bring up Paypal, as it’s very uncommon for New Zealanders to use the platform to transfer money.

I’ve been scammed. What now?

Hindsight is always 2020, but it may not be too late. If you have lost money due to a scam report it to your financial institution or bank. If it’s on a credit card, there’s a chance it could be reversed.

However security breaches are also a concern, as scammers may have access to passwords and personal details. You may have been asked to download documents that include malware. People who are successfully scammed are often targeted again.

What’s being done about online scamming?

Unfortunately, not a lot can be done by New Zealand authorities, given that most of these ticket bot scammers are from outside the country. And according to Sharp, it’s much harder to investigate 1,000 people being scammed $20 than one person who’s lost $200,000.

While New Zealanders are back to a tentative new normal, most places are still gripped by Covid-19 and won’t be experiencing any live events for the foreseeable future. New Zealand will continue to represent easy pickings for a good while yet.

On that note: We present The Spinoff’s real conversation with scam bot ‘Loveth Bright’