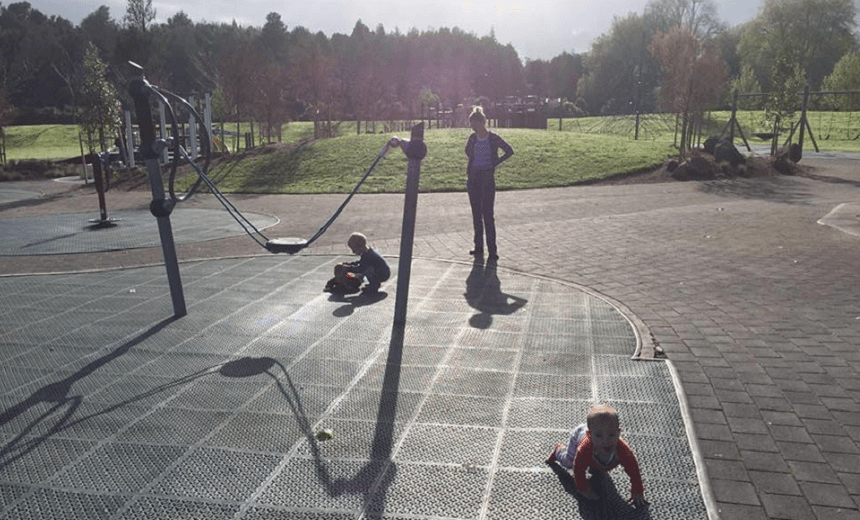 No, playgrounds are not an ‘obscene’ waste of money

A destination playground saved Angela Cuming’s little family from cracking, so just why does her local council reckon the cost of them is ‘bordering on obscene’?

During the long, long days I was stuck at home with three boys under three I would sometimes lock myself in the woodshed so my kids wouldn’t see or hear me cry.

It was my safe space, my messed up little safe sanctuary of sorts. A place where I could retreat to when the cries for attention and bites on my legs and tipped over bowls of food and howls of boredom and tiredness and general shittiness of the day got so overwhelming that I either had to temporarily remove myself from the situation or literally bang my head against a spot of unoccupied floor space.

It was the only thing I could think to do. Charlie was a needy and clingy toddler while his one-year-old twin brothers Tommy and Henry hated being cooped up inside and all three drove each other, and me, crazy. Trips to see family or friends were virtually impossible because I had three different sleep and feeding schedules to work around (”Yep, we will be there anytime between 9am and 3pm OK?”) and even something simple like a trip to the supermarket could reduce me, and them, to tears (sorry Peachgrove Road Countdown).

I once tried taking all three boys for a walk to our local ”pocket park” here in Hamilton. I pushed the twins in a pram and Charlie wandered behind us, dragging his feet. The park was a set of swings and a see-saw that none of them were interested in and then Charlie got tired and refused to walk back home. The twins started screaming and Charlie tried to climb into the pram so I had to carry him and push the pram home up a bloody great big steep hill.

So the woodshed it continued to be until I discovered that there was a place within driving distance to our home where I could take all three boys free of charge. There I could watch them play and have fun and meet new people and – more importantly – I could hang out with other grown ups.

That space was a large, purpose built playground – they are known as ‘‘Destination Playgrounds” – and it made an immediate impact on my struggling little family.

Now I could wait until all three were well rested and fed then pop them in the car and drive over at my own pace. There were parking spots right by the playground, essential when you are by yourself with three little ones.

I could carry one baby down to the toddler play area, ask another mum to keep an eye on them and run back to the car and collect the remaining two boys.

I could sit and watch the twins crawl about, fascinated by the mirrored boxes and giant abacus set at their height. When they started to walk (and wander) there was always a good number of sympathetic parents and grandparents around that would help me keep an eye on them.

While the twins played their big brother would timidly make little friends on the wooden climbing frames. I would watch my sweet but shy little boy take turns with other kids to run across a wobbly bridge or spin giant cogs to release a stream of tiny silver balls.

I would sometimes scoop all three up and we’d sit together on a giant spinning wheel. I remember thinking it was the first time all three boys had played together with their mama and watched her really laugh.

The playground was always full of life with so many families from different cultural and ethnic and other backgrounds. It was across the way from the local migrant resource centre and my little boys would play with the children of asylum seekers and refugees. Migrant women would share food with me from Sri Lanka and Afghanistan and Somalia. The deep love for our children, and a burning desire for their happiness and safety, was the thread that wove us all together in our happy little playground existence.

A born and raised Aussie, I learnt my first Te Reo Māori from that playground, picking up words from the many Māori families whose children would play there, before the whānau would retreat to the cool shade of the trees for some kai.

On weekends you would often see the playground’s two large, covered picnic areas host children’s birthday parties. Often my boys would be slipped slices of cake or a bowl of chips. One time I watched Tommy join a party and the hosts not realise he was an uninvited guest; we still have the party hat they popped on his wee head.

Now my boys are a bit older we’ve taken to exploring some of Hamilton’s other Destination Playgrounds. Charlie, still sweet but shy, loves one where there’s a giant stage. He jumps up on it and spins and twirls like Billy Elliot while his brothers clap and cheer. When it’s a sunny day we head to another that has water pumps and channels and the boys conduct their own little science experiments. The other day Charlie watched water run down hill and finally understood what gravity means. Moments like that are priceless.

And yet, sadly, it seems some do want to put a price on moments like that. Hamilton City Council had plans to build more of these destination playgrounds across the city but now Mayor Andrew King says the Council can’t justify the cost.

“A swing and a slide and a rubber mat so they don’t get hurt”, is Mayor King’s idea of what a playground should be.

His supporter, Cr Geoff Taylor, described the cost of one playground as ”bordering on the obscene”.

I don’t know much about much, but I do know that during those long, dark days at home with three boys under three that my local destination playground saved me from probably doing something scary to myself.

And I do know that the physical, emotional and mental wellbeing of parents and children rests a lot on having safe spaces like playgrounds to go to when things are just that little bit harder than usual. The destination playground I stumbled into was far more than just swings and slides. It was a healing room, a civic space that welcomed all and judged no one. I hope that these types of playgrounds continue to be built so more and more families have better access to them. Because I can’t think of a single reason my children, or any other child, can be a waste of money.

Angela Cuming is a print and radio journalist and a mum to three boys. You can read more of her writing at www.angelacuming.wordpress.com.