What did we learn about the trans-Tasman relationship from the Australian prime minister’s whistlestop trip? Justin Giovannetti reports.

‘Just don’t confuse a hongi with a hāngi. The hongi is the Māori greeting you just saw, the second one is a cooking method.”

The Australians had landed. That advice was delivered to a visiting press pack from Canberra an hour after Scott Morrison arrived in Queenstown on Sunday. Media were milling about after a pōwhiri delivered in a luxury hotel lobby more used to catering to a well heeled crowd from Sydney.

Earlier, guests had been hurriedly moved out of the lobby. The staff wouldn’t tell them what was going on. A businessman from Brisbane, looking out over lake Wakatipu, wondered what the fuss was about. “Your prime minister is going to be here in a half hour,” I told him. “Oh,” he said. The disappointment, like his first child had just flunked it on the sports field, was clear on his face. “Well, I guess it’s a good thing the two countries are talking,” he added, scuttling off to find a cab to the airport, where the engines on Morrison’s plane, dubbed Shark One after his favourite rugby league team, were cooling down from the trans-Tasman hop.

As the ceremony finished and Morrison left in a small motorcade, wrapped in a wool coat against the mild weather, the Australian press pack went hunting for help from a New Zealander. Their first question: How do you spell hongi? Pens and iPhones came out. After several attempts by an official to get it across went awry, they were gently and slowly given an explanation on just why hāngi was wrong.

Receiving an overseas visit is a high-pressure time for a leader. Things can go wrong. Conflicting cultures and languages can raise tensions, while domestic and foreign agendas can clash.

The annual get-together between Australia and New Zealand shouldn’t be one of those high-pressure visits. The two national economies are tightly laced together. The brands that dominate are inseparable, with the occasional exception (such as the absurdity that is Hungry Jack’s). Family trees cut across the Tasman with long branches and deep roots. While the Australian struggle that Sunday afternoon with a vowel and a macron prove that real differences exist, they are minor compared to one of the closest relationships in the world. 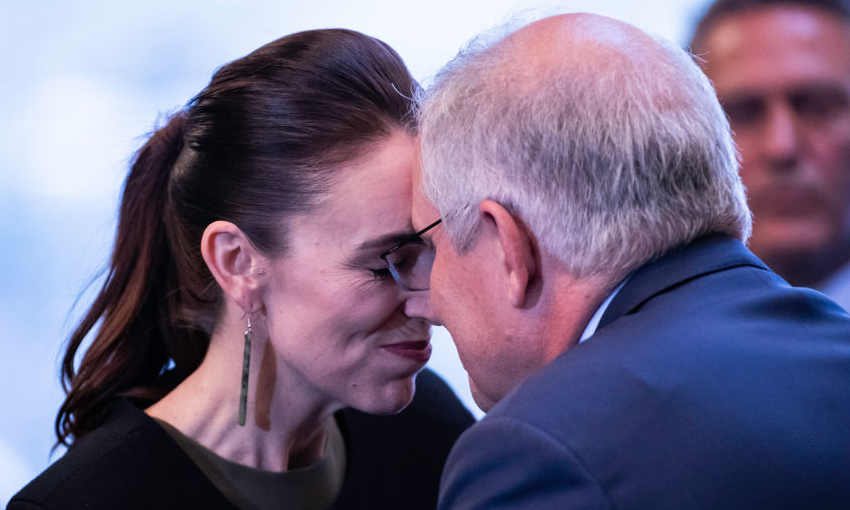 The first in-person visit between Morrison and Jacinda Ardern in the age of Covid-19 was a low expectations affair. The trip met that low bar. Apart from showcasing the joint success against the global pandemic, as exemplified by the hongi between prime ministers, it was a tourism exercise, with television shots dominated by sweeping vistas of blue lakes and the Remarkables.

The two leaders met a room full of Queenstown’s wealthy and local leaders at the top of the Skyline gondola at the end of the first day. In a quirk, Morrison is likely to have known more people in the room than Ardern. In the late 90s, he ran New Zealand’s tourism office and oversaw the creation of the “100% Pure New Zealand” campaign.

None of the tourism symbolism was lost on Morrison, who well understood how Queenstown’s economy risked being wrecked without tourists. The famously long lines outside of Fergburger are a barometer for the health of trans-Tasman tourism, he said.

By that measure, the Fergburger index shows that the trans-Tasman bubble is suffering. When I rolled up on Monday evening, there was hardly a queue to speak of, and the juicy burger arrived almost immediately. 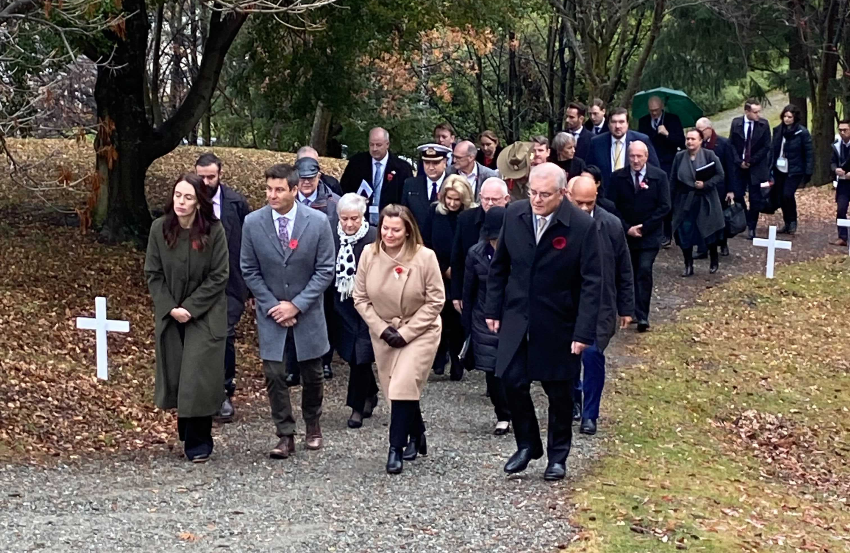 A few hours earlier, Morrison stood beside Ardern at a podium to bring the meeting to an end. In a carefully cultivated display of family love, the two prime ministers — or as they put it: Scott and Jacinda — declared their countries to be devoted to each other, despite meddling foreign influences trying to drive them apart.

A 10-page joint statement, with 51 points, was released as they spoke. The actual meeting between the prime ministers was a working lunch and only lasted about two hours. The real work drafting the statement had been done in the previous days and weeks before the leaders met. It’s not clear what was actually discussed in the room where the prime ministers sat down together. This time, in yet another luxury hotel, perched above the resort town.

After a quick statement from each leader, the floor was turned over to reporters to ask questions. Each country’s press pack was limited to four questions. The Department of Internal Affairs, which was running the trip, asked for the topics in advance.

The restriction rankled reporters from both sides. With nearly 50 reporters, photographers and camera operators present it was one of the best attended foreign trips in years. It also made for louder grumbling. Australia and New Zealand’s prime ministers both face freewheeling questions from reporters at home, but when together insist on control. An official said that “protocol” for international trips require the restrictions. In practice, it meant the questions were long and convoluted. And follow-ups, which weren’t allowed, were shouted out anyway.

Morrison, known nearly universally to the Australian media as ScoMo, cited the Anzus alliance as a counterweight to growing Chinese aggression in response to a question. Anzus is a largely moribund defence alliance from the 1950s that once tied New Zealand, Australia and the US together. While it might theoretically still exist, it isn’t part of the country’s defence strategy. It isn’t clear whether Morrison really thinks it’s a going concern. A follow-up question would have cleared that up.

Most of the questions were on China. The entire meeting could have been overshadowed by a segment on the Australian current affairs show 60 Minutes on Sunday night. A trailer released in the week before the programme aired warned that Aotearoa was turning into New Xi-land, a play on the Chinese president’s name. 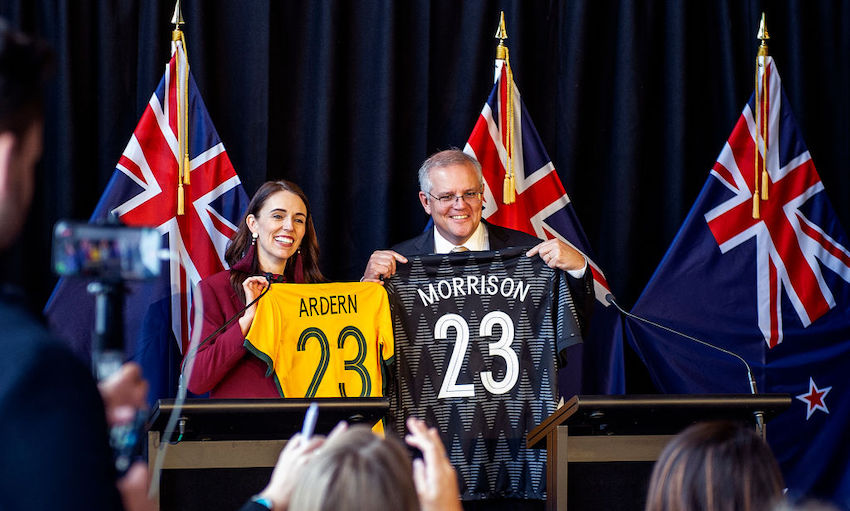 The programme warned that New Zealand was going “soft” on China, but failed to make any dent at the conference. In reality its content was more about Australian frustration with the country’s ongoing trade dispute with China than anything new on Wellington’s approach to Beijing.

The 2020 meeting between the pair, in Sydney overlooking the Opera House and Harbour Bridge, is best remembered for Ardern’s quip that Australia needs to stop “exporting its problems” to New Zealand through the deportation programme of so-called 501s.

While there was nothing as memorable this time, Morrison’s defence of New Zealand’s approach to China garnered headlines on both sides of the Tasman. Both prime ministers said they agreed on China and little sets them apart. Their communique shared “grave concerns” about the crushing of democracy in Hong Kong, mass human rights abuses in Xinyang and the militarisation of the South China Sea.

“People always try to divide Australia and New Zealand, all over the place, they will not succeed,” said Morrison.

The Australian newspaper thundered that “NZ backs Australia’s tougher stance on China”, while the New Zealand Herald reported that Morrison had “said there was no difference between New Zealand’s and Australia’s respective stances.”

Both prime ministers got to go home with a win. Neither changed anything about their positions on China.

The next day a foreign affairs spokesman for the Chinese government said that Beijing was “deeply concerned” with the “irresponsible remarks” from both leaders. At the same time, the Global Times newspaper, controlled by the Chinese community party, responded to the statement from the prime ministers with a yawn. “The joint statement between Canberra and Wellington did not really exceed the previous position of New Zealand,” it declared.

That’s a victory for the two leaders. It could also be a win for Queenstown, if the Australian reporter who remarked on his way out that he’ll come back with his family is a guide. But, he stressed, he’d only be returning when it’s warmer.