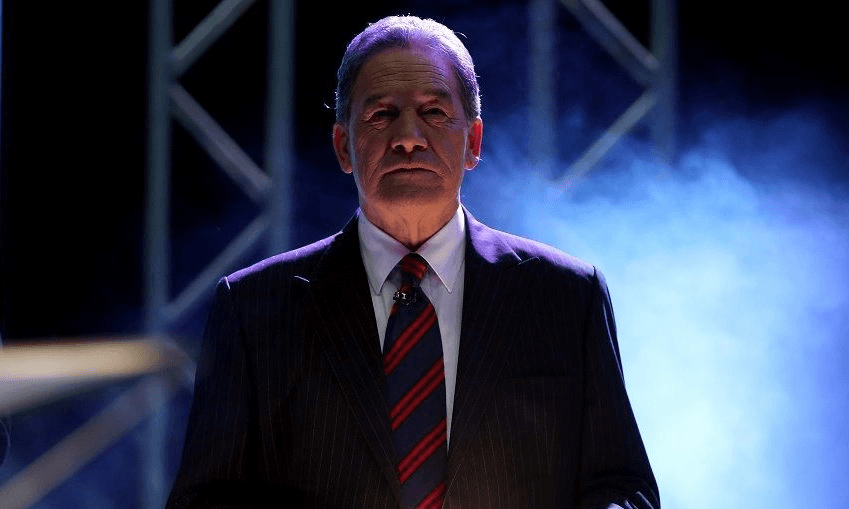 It’s one thing for Winston Peters to snarl and threaten the press as an opposition MP, but taking legal action to force media to reveal their sources as deputy PM is quite another, writes Toby Manhire.

Towards the end of the morning, a serious man in a polo shirt appeared at Spinoff headquarters, sweating a little from the stairs, clasping paperwork in his fist.

“Where is Tim Murphy?”

“Do you know where he is?” Um, Morningside, maybe? “Where in Morningside?” Um, don’t know. Sorry. And away went the man. What was going on? Was this the mother of all pranks? Was it some kind of parody of hyperbole?

Turns out that the man wasn’t a would-be Newsroom intern, but, presumably, a bailiff – sorry, a process server – intent upon serving papers on the editor of the news site, along with eight others.

The leader of the New Zealand First Party and now deputy prime minister evidently remains furious about the leaking of his superannuation details – a form filling error seemingly led to him being overpaid for a number of years – in the election campaign.

Peters, who wishes to “identify and sue” those responsible, has issued proceeding in the High Court, and is reportedly seeking discovery of material relating to the leaks from a bunch of people: National MPs Bill English, Paula Bennett, Steven Joyce and Anne Tolley, staffers Wayne Eagleson and Clark Hennessy and Ministry of Social Development CEO Brendan Boyle.

Which, arguably, is fair game. More problematic is the targeting of media. As well as Murphy, Newshub political reporter Lloyd Burr is being hit up for discovery.

The sort of approach that might be laughed off as same-old-Winston, and defused with a Cheshire grin, is a whole lot more alarming when it’s no longer a cantankerous and characterful opposition MP but the deputy prime minister. Surely the new NZ First chief of staff, former esteemed academic and commentator Jon Johansson, would have been begging him not to launch such a daft and oxygen-sucking action?

And in any case, hasn’t the deputy prime minister and foreign minister got better things to do – like focusing on the APEC summit, attendance at which played a role in the counting cock-up by the government in parliament today?

And if he’s determined to continue waging war on the media, hasn’t he got enough on his plate already, what with that lawsuit he promised he’d filed against Mark Richardson, for comparing him to pus?