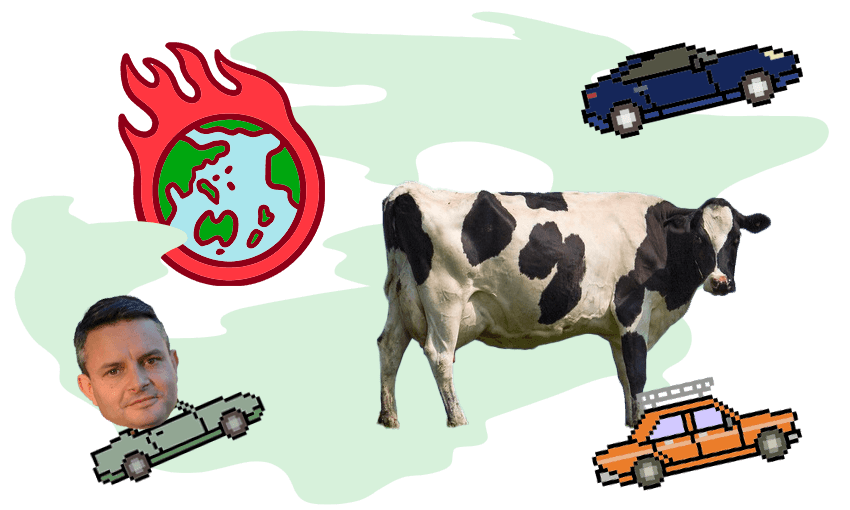 By Gareth Hughes
Guest writer
Made possible by

After decades of inaction, the Emissions Reduction Plan is a milestone. But we need a level of political ambition as high as the existential threat of climate change, argues Gareth Hughes.

Many years ago I had the rare privilege of visiting Kiribati, the low-lying Pacific nation on the frontlines of climate change. Climate change isn’t academic there – it’s a lived part of daily existence. Even then, in 2010, they were building seawalls to try to keep the rapidly rising seas from washing into their fields. Heartbreakingly, these flimsy walls were built from garbage and sticks and would be no match for the power of the waves.

It comes in the fifth year of Ardern’s premiership, 14 years after the Emissions Trading Scheme was created and 32 years after New Zealand’s first climate targets were announced. Since 1990 New Zealand’s emissions have increased by a full quarter – primarily as a result of “cars, cows and coal”. Successive governments have preferred agricultural exemptions, ineffective price signals and technological wishful thinking over more proactive policies. Inadequate targets, pine tress and creative accounting have all been used to mask our long-standing lack of deep and decisive action.

Yesterday climate minister James Shaw released the Government’s first Emissions Reduction Plan (ERP) – a laundry list of policies to meet the first emissions budget. The plan sets out $2.9 billion in spending from the Emissions Trading Scheme, the biggest single item being a $569m cash-for-clunkers scheme to encourage cleaner vehicles. There’s $350m for walking and cycling, $650m to help industry invest in low-carbon processes and $339m for agricultural research and a new Centre for Climate Action on Agricultural Emissions. Farming still gets a free ride outside of the ETS and many people have pointed out the irony of it receiving about a third of the total funding without contributing anything towards it.

Despite being a weighty 343 pages, the plan lacks detail and ambition and many of its pages are padded by outlining existing projects and case studies. Far too many actions are listed as to “investigate”, “explore”, “trial” or “consider”, and 12 separate new strategies are proposed. Substantially grappling with the 50% of our emissions that come from agriculture or making difficult decisions like reducing the national dairy herd have been “kicked down the road” to another day, along with congestion charging and bans on internal combustion vehicle imports. People hoping for a permanent extension of public transport discounts, free public transport or electric bike incentives would have been disappointed.

With billions of dollars of ETS revenue to spend, there are many worthwhile projects in the plan. Home insulation, more electric car chargers, a new Climate Information Centre and organic kerbside waste collection are all good projects. One particularly promising area the plan outlines is a Māori climate strategy and action plan that “prioritises mātauranga Māori”. Funding will be made available for tāngata Māori initiatives and I would love to see solar panels adorning the roofs of marae, and whānau and hapū producing their own power. I imagine an Emissions Reduction Plan developed in a true Tiriti partnership would be stronger.

I wanted to see a huge regenerative agriculture fund and a €25bn package like in the Netherlands to radical reduce livestock numbers. I wished for more to help our most vulnerable New Zealanders cope with climate change among the other structural challenges they face. I hoped the ERP would have sent a clearer signal that New Zealand coal burning might end before my children have kids and oil drilling might stop before they have grandkids. There are plenty more climate policies to push politicians of all stripes on.

After decades of inaction, the ERP is a milestone and a step forward but a small step. Would this plan truly demonstrate to a citizen on a small-island state like Kiribati that New Zealand is treating climate change like an emergency and doing all it can to reduce its high per-person emissions? Probably not. It does show a direction of travel and after decades of inaction, perhaps those selling this aspect of the ERP are right to celebrate this. We need a level of political ambition as high as the existential threat of climate change.

The ERP is a modest step in the right direction but still leaves many of the most intractable, difficult choices ahead. We should celebrate positive steps but we shouldn’t forget Bill McKibben’s warning that “‘winning slowly is the same as losing”.

While this isn’t the bold, transformative plan to fundamentally redesign our economy to live within planetary boundaries it should be, it can be a foundation to build on. The climate movement has made massive strides and is now securing serious money and policy programmes, but the scale of action is not yet matching the scale of the climate emergency.

In the end, a bold, transformative plan is unlikely to come handed down from those in power – it will come from people coming together. People who want to turn roadway into cycleway like on the Auckland Harbour Bridge, travel between our towns and cities on a national network of fast intercity rail and ride on modern free public transport need to redouble their efforts. Those campaigning to end coal burning for milk dehydration and a ban on coal exports need to ramp it up. Those calling for social justice and drawing attention to the fact 15 companies are responsible for three-quarters of New Zealand’s emissions need to constantly remind our politicians about this. We need to work together, build bridges and form alliances across society to create a transformative climate movement. This is just the start.

Gareth is a former Green MP, now the country lead for the Wellbeing Economy Alliance and chairperson of SAFE.