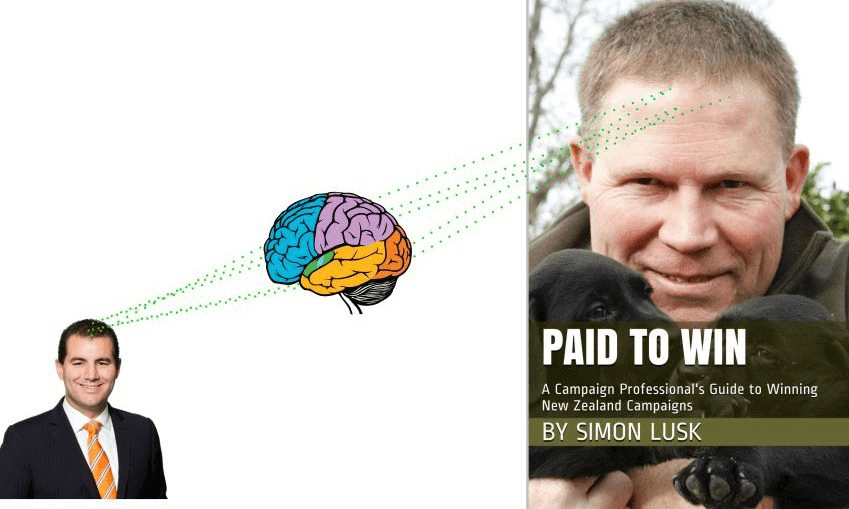 Last night RNZ reported that a woman alleging bullying by rogue National MP Jami-Lee Ross said she had received threatening phone calls from Simon Lusk. Ross himself had earlier confirmed that he was taking advice from the shadowy political operative. But who is he, and where have we heard that name before?

When private security contractor Mark Mitchell returned cashed-up from Iraq with an interest in politics, he engaged the one operative in New Zealand whose tactics were as militant: Simon Lusk. Where campaigns in New Zealand have long been run under a facade of civility and fair play, Lusk believes politics is a “brutal and Darwinian” sport in which money and professionalism win above all. It’s cheaper to destroy your rivals than to negotiate with them is his credo. In his one-man crusade against Simon Bridges, Jami-Lee Ross has apparently had at least one person in his corner: a political strategist who thinks best “with a gun in hand and dogs under control” (his profile on The Wild explains that “during the difficult months of April & September when fishing and upland is not possible, Simon shoots deer for the freezer and rabbits and hares off the roof of his Isuzu D-Max”) is the perfect ally. After all, they’ve worked together before.

Lusk is a keen student of international politics, and his pioneering of the sort of media smears most notably employed by Republicans in the United States was the backbone of Nicky Hager’s Dirty Politics. In the 2014 book, Hager revealed Lusk’s attempts to move New Zealand politics to the right through media manipulation and merciless attacks on opponents within and without the party. Lusk had a long term goal of influencing the party right down to candidate training, Hager said.

As Mitchell’s 2011 campaign for the safe National seat in Rodney heated up, posts began to appear on the rightwing Whale Oil blog questioning the other National candidates on everything from their religious beliefs to their connections to the apartheid movement. Published under Cameron Slater’s byline, the posts were in fact ghost authored by Simon Lusk, Hager revealed. National Party leadership warned Mitchell off working with the operative, but messages from the time released in Nicky Hager’s Dirty Politics shed light on the brand of politics Lusk was perfecting, where even opposition within your own party can be taken out.

“I am not,” replied Lusk. “I am just motivated to cut throats. Unfortunately the biggest buzz I get is when I wreck someone, only done it three times, but I was on a massive high.”

And Lusk appeared to have a powerful ally within the party – MP for Botany Jami-Lee Ross. In January of that year Lusk had helped secure Ross’s selection to run for National in the Botany by-election, winning out over Slater’s friend Aaron Bhatnagar. The win provided Lusk with a power base in Auckland, and a direct connection to a key National liaison with the affluent Chinese community.

Simon Lusk has an eye for spotting and promoting political talent, not all of whom are as rightwing as Jami-Lee Ross: even Sam Johnson, who led the Student Volunteer Army in the Christchurch recovery, was identified in Dirty Politics as someone Lusk considered a “client”. In the final stages of the Rodney race he helped to secure a gushing profile of Mitchell in the Sunday Star Times. With cash provided by Lusk, Slater even manipulated Vic Uni’s iPredict service to show favourability to Mitchell.

New Zealand politics are amateurish, Lusk says, and cash can achieve everything from campaign victory to the removal of rival MPs – a service he offers on his website.  “Avoid building a sense of community,” he tells local government candidates in his book Winning Local Government Campaigns. “This means taxing locals to fund Leftie projects”.

Lusk emphasises the importance of money above all, and believes National’s dominance under John Key can be attributed in huge part to their superior fundraising abilities. Jami-Lee Ross became a crucial component of this machine, collecting donations that Simon Bridges would later use to fund, among other things, attack ads on the Labour Party.

Since the release of Dirty Politics Lusk had been largely out of the spotlight. But as Ross went on the attack over the last week, pre-empting a removal attempt by Simon Bridges and drawing out the misery by drip feeding the media, both journalists and politicians alike sensed the fingerprints of Simon Lusk. Simon Bridges alleges the pair have been meeting for months. Ross says he hasn’t paid Lusk since 2011. But in the world of political influence, payment in cash is not always the end goal.

And Lusk’s attacks aren’t exclusively reserved for political opponents. Last night on RNZ a woman alleging severe bullying and manipulation said she had received a threatening phone call from Ross on a burner phone. He was speaking in “dark tones with a severe voice”, RNZ reported, and told the woman that she was throwing her career away and they were “at war”. The woman said she felt extremely frightened. She said she also received another call, this one from from Simon Lusk. She was offered political advancement and support as long as she unwaveringly backed Ross, she told RNZ. She said it felt like blackmail.

“Support Jami-Lee Ross and good things will come to you,” the message was. “Don’t, and they will not.”

That may just apply to politicians too. Jami-Lee Ross has indicated he will stand as an independent in Botany. With his fundraising abilities, and Simon Lusk working behind the scenes, it may be that the shift to the right seen internationally is on its way here too.