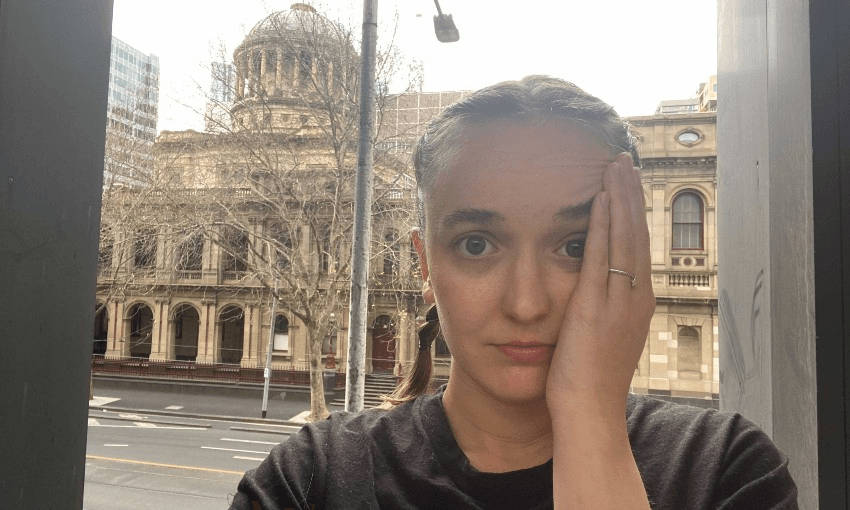 A quick trip to Melbourne to see a show was never meant to end in two weeks locked down in a hotel room. The Spinoff’s Alice Webb-Liddall explains her impossible, failed rush to get home.

There are obvious risks involved with flying overseas at the moment. I had a holiday to Japan booked last March, when things really started kicking off, and that trip was obviously very quickly cancelled.

Since then, I’ve made brief visits to the South Island to see family, to Northland for an Easter camping trip and the Coromandel for a long-weekend breather. But they never really scratched the travel itch that had been building in the weeks leading up to the ill-fated Japan excursion.

In the beginning of this year, my best friend was cast as Wednesday in a production of the Addams Family in Melbourne, a role I’d drunkenly prophesied her getting a year prior. Along with another friend and Wednesday’s mum, I made plans for a surprise visit to coincide with the show. The bubble was open, flights were going in and out of Australia daily, and we had all prepared for the possibility that we might have to fly home quickly if the situation changed.

We landed in Melbourne late on Tuesday night, slept, then made our way into the city to our friend’s hotel. We surprised her at the door, watched the blank face turn into recognition and braced ourselves for the barrage of hugs. We explored the city – masks on – caught a tram, went to a museum and saw a statue being unveiled in Fed Square.

At 4pm a message from a friend in New Zealand warned that Covid-19 response minister Chris Hipkins had told New Zealanders in Victoria to get home, quickly.

The three of us decided on our next move. To fly home, we would all need a negative Covid test – a requirement of the New Zealand government – though none of us had any symptoms. We would all go and get Covid tests first thing the next morning, the earliest we could.

On Thursday morning we were up at eight, filling out pathology forms and running down to the lobby to get them printed before hopping in the car and driving out to the testing station that had been recommended to us. The wait was short, and the test didn’t take long, though it cost us $150 a pop. Here in Australia they swab both nostrils and the throat. The woman at the centre said she would write on the form that we were on a Saturday flight so we could get our results as quickly as possible. No lockdown had been announced, nor any trans-Tasman bubble closure for Victoria, so as far as we were aware we were staying ahead of any potential threat of being stuck.

We knew nothing could be done about flying home until the tests had come back negative, which we were told could take up to 24 hours. We contacted Jetstar to cancel our flights home, which were booked for the next Tuesday, in preparation for booking new ones far sooner.

That afternoon, Victoria officials announced Melbourne would be going into lockdown from midnight. Then Hipkins said the Victoria-New Zealand bubble would be closing at midday the following day.

I took a phone call from my friend’s mum, who was sitting at her laptop looking for flights for us; any way for us to get home. The only option that would get us there in time would leave Melbourne at 6am on Friday, arriving in Auckland just in time for the bubble closure. But with our negative test results not expected until later on Friday morning, we were already stuck.

Maybe we should have never got on the plane in the first place, but we were cautious. We followed the rules and tried to get back; we spent $150 each on a Covid test as a precautionary measure. We still couldn’t get home in time.

We’ve all registered with SafeTravel, hoping that if the bubble isn’t opened soon we can get on a repatriation flight. What was initially a five-day lockdown has today been extended for another seven days; cases in the state are growing by the day but so far they all appear to have the same source, the removalists from Sydney.

For now, the four of us – our Wednesday Addams friend decided to lockdown with us – are in a hotel apartment with a handful of books and a patchy internet connection. Three of us are lucky to be able to work from here. We’re doing fine; I miss my cat and my fiance and being able to go outside, but we have a place to stay and enough food.

Staring down the barrel of potentially multiple weeks more here, though, I feel for the other people in similar positions, who came here, followed advice, and did what they could as soon as they were told to. And still ended up stuck thousands of kilometres from home.