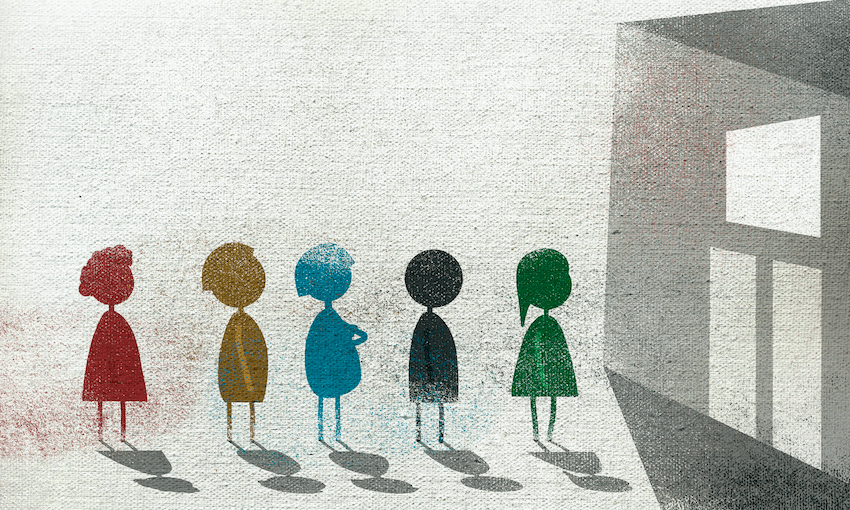 Tear it down and start again? Fixing our antiquated education system

In the year of our Lord 2021, why are our teenagers going to school dressed like matching Victorian butlers?

Why do they get forced into crowded rooms, sorted by, basically, their star sign, where about a third of them are bullied?

Why are we paying $16bn a year for a system that fails many tamariki and rangatahi Māori, and that excludes or fails to meet the needs of an enormous number of disabled or neurodivergent children?

We’ve seen the emergence, and raging success, of Alien Weaponry, Ru Paul’s Drag Race Down Under, and The Casketeers. Would you have predicted any of those, even 20 years ago?

Society has been changing fast, and our education system is not keeping up. Just ask any parent trying to accommodate 12 weeks of school holidays on four weeks of annual leave from work. The school calendar still seems to assume there are “housewives” in every home.

Most teachers, of course, are doing a great job in difficult circumstances. But for every advance they make in teacher training, education theory, and understanding how children learn, they have to try and put them into practice in a fundamentally flawed infrastructure. It’s like trying to build the internet using Lego.

Our current school system isn’t just underfunded, it’s outdated, by about a century.

Modern adult working life, for most of us, isn’t governed by bells, highly structured authoritarianism, or denial of bodily autonomy. It doesn’t happen in binary single-sex groupings. Teamwork and friendliness are more highly valued in most workplaces than competitive individualism. Self-management, initiative, and creative problem-solving are crucial adult skills for the 21st century – but they’re at odds with an education system that micromanages children’s intellectual lives and bosses their bodies.

If we’re shocked that Christchurch teenagers report horrifying levels of sexual abuse and harassment, why are we propping up a system that polices their bodies, and erodes their consent for six hours a day?

Imagine taking 30 random 43-year-olds off the street, with nothing in common but their birth year, and planning a curriculum for them that would meet all their learning needs. It would be both ridiculous and self-defeating – and it’s how we routinely treat nearly a million young New Zealanders.

And it matters because the challenges our kids need to prepare for aren’t the ones a Victorian education system can help with. We’ve long ago realised that rote learning and dunce caps don’t help anyone. If we’re going to have a shot at surviving the climate crisis, and building a world without war and famine, we need to start all over again. We need to build an education system that’s based on the best evidence of how children learn, and what society needs.

We need to start again.

Imagine if we could have a national conversation about this, where we’re not confined by the ways we’ve always done things. Real reform, not just tinkering.

I know this is hard. Society changes fast, but we’re not so good at changing our national structures. And of course, many adults survived their years of traditional schooling and will shut down debate with claims that “it never did me any harm” (eye roll emoji).

The trend of the last few decades has also been towards local governance of schools, with boards of trustees – mostly parents, meeting once a month or two – making most decisions about how schools are run. This makes it hard to enact changes across a whole town, let alone the whole country.

For example, it’s fascinating, in a car-crash kind of way, that Wellington’s secondary school sector has been allowed to grow up in a bizarrely uneven way, with apparently no political will to intervene. If you live in the northern suburbs, all your local schools are co-ed. If you live in the entire remainder of Wellington city, there are, by my count, 10 single-sex schools to only one co-ed option.

On top of this weirdness, because of (I can only guess) a century or so of class influence, ad hoc growth, and an apparent vacuum of central planning, there are no high schools at all in the enormous area from Kelburn to Khandallah. All teenagers from there have to spend an extra hour or two a day commuting into town for schools that local kids are then excluded from by zoning.

This is the kind of thing no one has fixed, so you could be forgiven for thinking that the kind of from-the-ground-up planning so many parents and kids are desperate for is completely impossible.

But systems are just people. There isn’t an Old-Fashioned Schooling Monster, dressed in an ill-fitting gingham pinafore, resisting all our efforts for improvement, and roaring a Latin motto protectively in front of a plaque listing all the head girls from 1892 onwards.

It’s just us. We get to decide. We get to tell Chris Hipkins – maybe once he’s overseen the vanquishing of Covid-19 – that we want him to do more than finesse the qualification schedule or rearrange the existing budget. We want our leaders to be brave, to lead, rather than just manage.

So let’s have a national conversation. Let’s aspire to something new and better. Let’s throw out the things that we’ve outgrown, and be realistic and hopeful about what children need – what we all need.

Let’s just not turn up to that conversation all wearing matching blazers, kilts and ties.