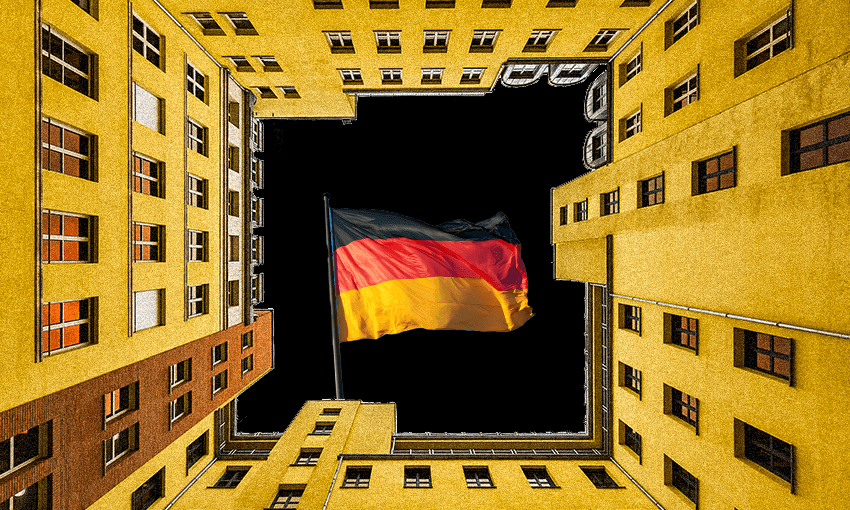 If Berlin can expropriate hundreds of thousands of apartments currently in private hands, could we be doing more to promote public housing and collective ownership here?

Since 2017, house prices in Auckland have risen by an average of 34%, with many suburbs seeing rises far higher than that. As landlords accumulate yet more properties, and inflation continues to take effect, higher prices are passed on to renters. The national median weekly rent rose 7% in the year to March 2022, according to figures from Trade Me. Skyrocketing rents in cities like Wellington are even driving students to switch universities.

Germany’s capital city Berlin is also facing rapidly rising rents. Eight out of 10 Berliners are renters, and they have seen their rents increase by 42% in the past five years. As a result, late last year 57.6% of Berliners voted to expropriate hundreds of thousands of apartments currently in private hands. But what does that mean exactly? And what has happened since?

Given Auckland’s upcoming mayoral elections and the important role housing and housing policies are likely to play, it is worth looking in detail at the Berlin referendum. To do so we first need to define some crucial terms.

Who is a corporate landlord?

The landlords in question are those who separately own at least 3,000 rental properties in Berlin. Overall, corporate landlords targeted by the referendum control one in six of all Berlin apartments. The primary targets were, as organisers readily acknowledged, Deutsche Wohnen (DW), a company which owns over 114,000 apartments in Berlin, and Vonovia, which owns around 43,000 apartments. Both companies benefited from the privatisation of Berlin’s housing stock in the early 2000s.

A left-wing coalition government of Social Democrats (SPD) and the far left (Die Linke) oversaw this process, selling off tens of thousands of flats far below market value. This was driven by the neoliberal view that these were ultimately not assets but liabilities which could be sold off to help balance the state’s expenditures in the short term and that, in any case, the private sector would take better care of Berliners’ housing needs than the state.

Is what Berlin voted for ‘nationalisation’?

Some media have called the plan to seize the apartments “nationalisation”, but a more accurate translation of the German term “Enteignung”, as used by the campaign, is “expropriation”.

There are two articles in the German constitution that might be deployed to expropriate corporate landlords. One of them, which states that various kinds of property may be transferred to “common” ownership (Gemeineigentum) in certain circumstances, is more likely to succeed, according to experts. But that article has never, in the entire post-war history of Germany, been applied. This leads to a number of issues. For one, it is not clear what form “common ownership” might take exactly. But it is unlikely that the properties would be transferred straightforwardly into state ownership, as implied by the term “nationalisation”.

How much is an apartment worth?

Opponents of expropriation, including Berlin’s current mayor Franziska Giffey, have argued the campaign could bankrupt the city. But the proposed solution is quite simple. The expected returns from rental properties were never going to be realised all at once. Rather, corporate landlords expected returns to come in over years, if not decades. Why not compensate them in the same manner? This would, proponents argue, create a budget neutral solution. Ownership would be transferred, with rental payments now going into the pocket of the new entity in common ownership, which would in turn make compensation payments to the previous owners for the next 30 or 35 years.

But it is not clear how much the properties in question are worth, or how their value should be determined. The highest estimate is around €36bn. But that would amount to the state simply buying all the apartments in question at their current market value, an unusual step for large-scale real estate transactions. It is more common to use expected future rental income as the basis for such deals, which would reduce compensation payments to €23bn at most.

That number still includes loans taken on by corporate landlords in a market with prices greatly inflated due to speculation based on the hope that rents would continue to increase rapidly. It would even allow these publicly traded companies to continue to pay dividends to shareholders.

But what about a model which would prioritise the interests of the wider community over those of property owners and their shareholders? Corporate landlords have an interest in continued rent increases; the wider community does not. Other models therefore assume a lower rental earnings potential of the flats in question due to more socially sustainable rents being charged in future. This would further reduce compensation payments to somewhere between €14bn and €16bn.

Giffey was vocal in her personal opposition to expropriation. As mayor, her problem is that the referendum result is, in principle, legally binding. The Berlin state government must now take all necessary steps to transfer into common ownership the rental properties which fall into the scope of the referendum. An expert commission evaluating the constitutional conformity of expropriation has recently been convened. The referendum’s organisers believe that the selection of experts for the commission has already skewed the commission’s findings in favour of the opponents of expropriation. The commission is to present a report on the legal challenges ahead within a year. Should the commission find that expropriation may be legally permissible, the Berlin state government would have to introduce legislation to begin the process.

Berlin is far from expropriating corporate landlords. Berliners voted in the referendum on the same day as they effectively installed a mayor who opposed the idea from the start. A mayor who, before the election and the referendum, cited potential future compensation payments as a reason for currently low investment in health and social care.

There is some substance to critiques of expropriation: this measure will not create a single additional flat. But that is not its purpose. Its purpose is to guarantee affordable rents in around 250,000 Berlin apartments. Expropriation can only be one measure among many to guarantee sustainable rents. Another must be an expansive strategy to build new low- and middle-income housing. They must go hand in hand. As recently as 2019, the German constitutional court affirmed that preventing social and economic segregation was a legitimate reason for the state to intervene in the housing market. Berlin’s government, or a new entity under common ownership, could leverage the expropriated rental properties to generate funds for investment in new social housing, or to make existing housing more energy efficient, an urgent demand to tackle the climate crisis.

What could Auckland learn from Berlin?

Berliners have clearly, and with a strong majority, voted to expropriate corporate landlords. There may be legal obstacles, but it is unacceptable that their elected representatives should dismiss this demand outright, as Giffey has done. Even if the vote is only to be understood as a “signal” that something drastic be done, that signal must be respected and acted upon.

Whether expropriation is truly voters’ demand or not, the referendum result is a signal that voters are beginning to recognise that corporations which seek to maximise their own profits do so at renters’ expense. This is an important sea change that politicians like Giffey must not ignore. The referendum’s message is clear: to reject the supremacy of the market which has brought housing insecurity to hundreds of thousands across Berlin and contributed to a cost-of-living crisis now enveloping Germany.

Aotearoa, too, is facing a similar crisis, driven by the cost of food, fuel and housing. Politicians must show they are responsive to these issues. Otherwise, they risk alienating voters from democratic processes as they increasingly feel those are unable to deliver on anything other than the concerns of shareholders or the needs of large corporations.

The powers of Auckland Council are limited compared to those of the Berlin state government and the Auckland housing market is much less concentrated in the hands of corporate landlords. Nevertheless, Auckland Council faces some of the same issues. Housing affordability must urgently be addressed. Increasing housing density and removing parking while boosting public transit will reduce both housing costs and emissions. While the privileged complain about a consultation to remove some on-street parking, the living standards of hundreds of thousands of people are threatened by the ongoing cost-of-living crisis. A continuing failure to deliver on these issues fundamentally risks undermining Aucklanders’ belief in not just their elected representatives, but in the political system as a whole.