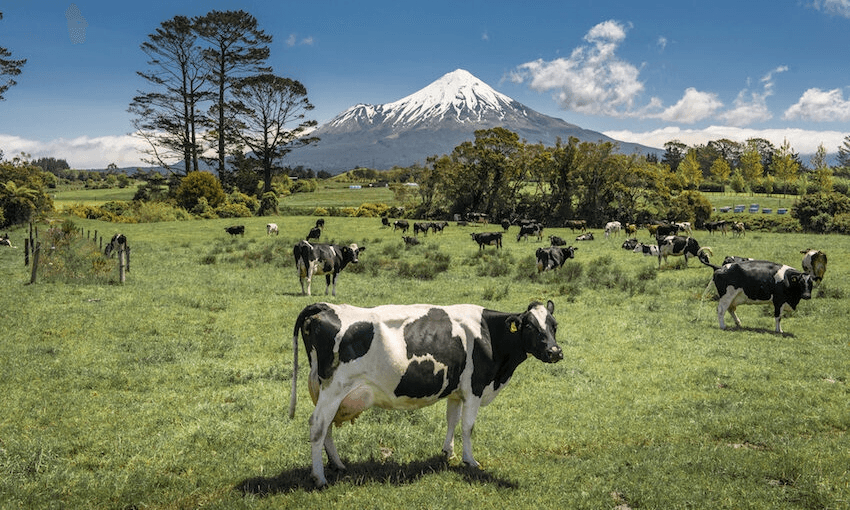 Dairy cows on a farm in the Taranaki region (Getty Images)

Dairy cows on a farm in the Taranaki region (Getty Images)

To lead off today, a story from the rural world with big implications for regional economies: Prices at the latest Global Dairy Auction are up a creamy 15% across the board. The Country reports this is the eighth such increase in a row, and the eleventh rise out of the last twelve auctions. It was pretty unexpected too – the opening line of that story reads “Kiwi dairy farmers could be forgiven for thinking that the decimal point was in the wrong place”. The price rises are seen as being based on incredibly strong demand out of Asia.

But it’s an especially good result for Fonterra, because their key product went up by even more. Whole milk powder prices are up 21%. The NZ Herald’s Jamie Gray reports Fonterra is now assessing whether their farmgate milk price should go higher for the next payout – something banks are already pricing into their forecasts. The strong auction also pushed share prices up for Fonterra and A2.

For the parts of the country that rely heavily on dairy, these sorts of results are a godsend. In Southland, Stuff’s Logan Savory reports farmers are talking up the prospect of that money flowing through the regional economy. As one farm owner put it, “everyone gets a bit of it. It’s the old story; when farming is going well [New Zealand] is going well.” However, the optimism was also tempered by a bit of nervousness – like any commodity, sharp price rises in dairy aren’t always sustainable, and it could fall again just as quickly.

If you ever want to know the day to day latest on Covid, our live updates is the place to get it. Yesterday saw a few developments, particularly around the self-isolation system. PM Ardern has been called on to apologise after making what appear to be contradictory comments to a Facebook update from the official Covid-19 page, regarding whether Case L should have been self-isolating. Covid-19 minister Chris Hipkins backed the PM up, and denied that the government’s messaging on this had caused a public ‘pile-on’ against the case. There was an excellent comment piece this morning from the NZ Herald’s (paywalled) Claire Trevett, outlining why this argument is such a bad one for the government to be having right now.

We also had another all-important number released – zero new community cases. That’s a good sign, but according to Hipkins we’re not out of the woods yet, because the test results of a large number of casual plus contacts still need to come in. There was also a vaccine rollout update: 9,431 people have now received their first dose, which is slightly ahead of schedule. But as Justin Giovannetti reports, there is still quite a bit of secrecy around the government’s vaccine plan.

A long-running legal battle relating to revelations from the book Dirty Politics has finally come to an end. I’ve reported on the full public apology given by PR man Carrick Graham to three public health academics, after he wrote defamatory blog posts about them on the Whaleoil blog. In what was set to be a much more lengthy court process, Graham agreed to a settlement just a few hours after opening arguments were heard. One of the academics said they fought the case on behalf of others doing research that powerful lobby groups don’t like – “the exposure of these dirty PR tactics clears the way for all our colleagues who are advocating for strong public health policies to do so without fear of being abused and defamed in the media,” said Professor Doug Sellman.

The police commissioner is rejecting calls to sack officers accused of creating a bullying culture within the force. Radio NZ’s Ben Strang – who has covered the story for years – reports the IPCA found “significant elements of bullying and a related negative culture”, after the RNZ investigation spoke to hundreds of current and former police staff about their experience. The bullying was fostered in part by a management style that was “unduly authoritarian and directive”. There was a really interesting long-form interview on Nine to Noon yesterday with police union boss Chris Cahill, who went into more depth about what underlined the bullying allegations – in some cases they were the older and more experienced members of the force who challenged new strategic directions.

Tensions appear to be mounting around the Queenstown region over consent to build a major new film studio complex, reports Isobel Ewing for Crux. The studio will be getting fast-track funding from the government as part of the Covid recovery project. But it has been caught up amid another battle, over zoning for part of the land. It all gets a bit complicated, but the picture it paints is one of communication and process difficulties making things more difficult than they need to be.

A group of Samoan parliamentarians have been accused of alleged treasonous acts by the country’s PM, and a major investigation has been launched, reports RNZ Pacific. The investigation was ordered on the last sitting day of parliament before the election. The allegations appear to relate to campaign activities. I can’t tell you what the merits of the allegations are, but I can tell you the major newspaper Samoa Observer is deeply concerned about them. In an editorial, they wrote “such inquiries have all too often been the raw materials for a performative process that ends with the suppression of political opposition movements by Governments turning their backs on democracy.”

Right now on The Spinoff: Siouxsie Wiles and Toby Morris have put out an illustrated guide to recognising the symptoms of the new Covid-19 strain in seven different languages. Myles Thomas writes about the potential merger of TVNZ and RNZ, and how it could be very dangerous for the latter. Michael Andrew writes about what the revenue from a capital gains tax could have paid for – for example, 250 flag referendums. Mihingarangi Forbes speaks to Leonie Hayden about her new documentary, on the 19th century Crown campaign against Tainui. Chris Tse gets excited about the shortlists for the upcoming Mary and Peter Biggs Award for Poetry. And Sam Brooks has a look through the catalogue on streaming service Star, and picks out the best bits.

For a feature today, a really interesting piece about the technology being picked up by farmers to make their jobs easier. Phil Edmonds for Farm Life Media has reported on why adoption rates are currently lower than you might expect for digital technology, and looks into what could be done to improve that. Here’s an excerpt:

Mat Hocken, chair of The Rural Innovation Lab, a collaborative platform supporting farmers and growers to experiment with new technology, says uptake is definitely linked to how farmers can make better use of their time. “It might not be about reducing the number of people onfarm – there are plenty of farm operations still run by one or two people – but time saving is the big one.”

The research into what farmers actually want backs this up. “It’s tools that are labour saving, rather than those that are delivering new knowledge, that are most widely used onfarm,” says O’Connell. “These tools don’t always line up with labour-saving claims (draughting systems, automatic cup removers and so on), but it is often the case that they enable the same number of people to do better work.”

There could be key lessons here for aspiring developers – less about insights, more about task removal. O’Connell acknowledges that “more and more tools are claiming to offer insights, but some might not be hitting the mark”.

Some unfortunate news for a major sporting event: The Women’s Rugby World Cup will be postponed. The tournament was set to be held in New Zealand in 2021, but because of Covid concerns that has been pushed back a year. This could make things a lot more difficult for players, Wellington rep Alice Soper told the NZ Herald. Many of them aren’t paid professionals, and so scheduling and being able to take time off work at the right time is an all-important consideration. On the other hand, another year to prepare and promote the tournament might make it a bigger deal when it (hopefully) rolls around.