The latest documentary in the New Zealand Wars series hit different for presenter Mihingarangi Forbes. She explains why to Leonie Hayden.

Content warning: contains descriptions of the murder of women and children, and sexual assault.

The military campaign by the British Crown to suppress Māori sovereignty and acquire Māori land for the new settler colony played out in different parts of New Zealand, over a number of battles and massacres between 1845 and 1872.

In Waikato, that campaign began in 1863. Governor George Grey built his supply line – what we know today as Great South Road – to transport more than 18,000 troops from Auckland all the way down to the Mangataawhiri River, the northernmost border of more than a million acres of sacred Tainui lands. King Taawhiao, the second Māori king, had warned that crossing Mangataawhiri would be considered a declaration of war.

According to historian Vincent O’Malley, Grey assembled a “dodgy dossier” that supposedly incriminated Tainui in a conspiracy to attack Auckland. He then issued an ultimatum to the villages on the banks of Manukau Harbour in South Auckland, whose gardens and farms had sustained the Auckland settlers, asking them to pledge an oath of allegiance to Queen Victoria, or be banished over the Mangataawhiri border to be invaded alongside their Waikato whanaunga.

NZ Wars: Stories of Tainui is the most recent release from Great Southern Television and Aotearoa Media Collective’s series for RNZ about the real stories of the New Zealand Wars. It documents three key encounters: Rangiriri, Rangiaaowhia and Ooraakau. Like the Waitara and Ruapekapeka documentaries before it, it’s a hard watch. With the help of O’Malley, the harrowing stories are told by the descendants of those who fought to protect their land and people from the invasion – iwi historians Rahui Papa, Brad Totorewa, Tom Roa, Mamae Takerei and Kawhia Muraahi.

As an uri of the Tainui waka and Ngaati Maniapoto, presenter Mihingarangi Forbes found this story particularly hard to tell. “I was really nervous about how I was going to feel in the interviews, because I am a bit of a tangiweto. I had been able to keep it together on Waitara and Ruapekapeka and keep that professional distance from the stories.”

She says the interviews brought her into the presence of history in emotional ways.

“There’s that thing where you do a karakia and you tap the pou behind you to wake up the dead to talk through you.

“With people like Mamae, Brad and Tom, there’s a connection that’s so deep and intergenerational, you can’t deny it when you’re in their presence. We offered karakia but often they did the karakia themselves and I felt like perhaps they were also opening themselves up to have the stories told through them.”

She adds: “Then there is actually being on the land.”

Forbes said they had a number of strange experiences in Ooraakau, where her people, Ngaati Maniapoto, stood and fought and where these now famous words were uttered by her ancestor, Rewi Maniapoto: “Ka whawhai tonu mātou. Āke! Āke! Āke!” We will fight on forever, forever and forever. A third of those fighting or hiding in the pā were women and children. After so many betrayals, they no longer had any trust that the British would spare them, and so they stayed behind Maniapoto lines.

“The strangest things happened at Ooraakau for me. We went four or five times and every time I would meet someone there who was interwoven into my life and my family’s life somehow. The first time we put the drone up, it just lost course and got eaten up in a peach tree. So we were like, “OK, we’re not in control on this whenua.” That’s how I felt. We weren’t in control of weather, wairua, and I was definitely not in control of my emotions. I felt like crying the whole time I was there.”

Ngaati Maniapoto were ultimately outnumbered, and out of food, water and ammunition. In the hours after the battle ended, as men, women and children tried to escape, soldiers on horseback hunted them down and killed them.

“The history of what’s in that soil, near the top of it and deep down inside of it, does get you going. When it came to physically being at Rangiaowhia and Rangiriri and Ooraakau, it was…” Her voice trails off. “It was interesting.” 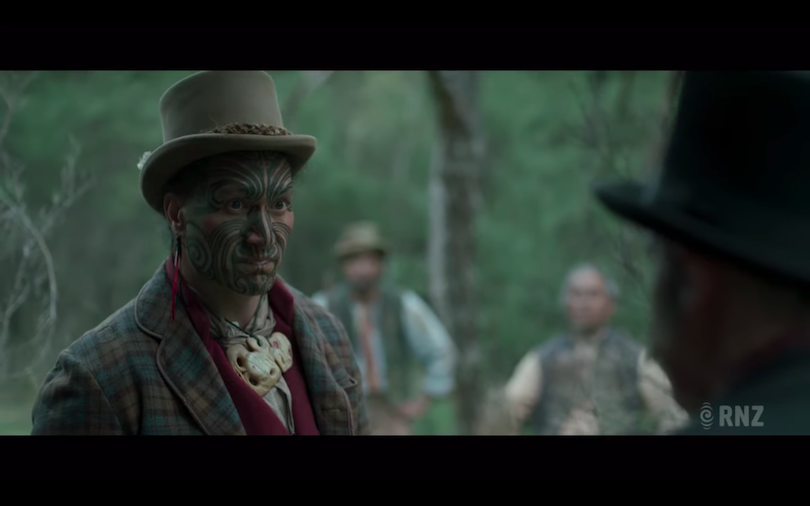 In one of many excellent recreations, Taawhiao, the Māori king, warns Governor Grey that crossing Mangataawhiri river is a declaration of war (Image: NZ Wars: Stories of Tainui)

While it’s no secret that Māori were masters of trench warfare and held their own in many battles, there’s another part in Stories of Tainui that stays with the watcher for hours, if not days afterwards. It’s the true story of another atrocity that still echoes in the memory of Tainui iwi everywhere.

In March 1864, Lieutenant-General Duncan Cameron ordered his troops to march silently under cover of night around Pāterangi, a fortified pā defended by Māori soldiers in anticipation of an attack.

Just before dawn they arrived in Rangiaaowhia, a safe haven approved by the Bishop Selwyn for non-combatants – women, children and elders. The soldiers ordered people out of their houses, where many of them were shot. Those who wouldn’t leave their houses were burned to death within them. Women were raped and killed in front of their children.

“A lot of people got in touch to say they ugly cried and afterwards had to sit with it for a while,” says Forbes.

In the final edit at least, Forbes is nothing but the calm, measured screen presence we’ve come to know and trust. Until a moment just near the end of the documentary as she’s delivering her conclusion, walking across the land at Ooraakau. “For me as Ngaati Maniapoto…” she says, and looks down, pausing for a long time, her eyes wet. “It’s far from over.”

“I didn’t want it to be about me!” she laughs, somewhat bashfully. “Cameron Bennett, who was the director in the field, and Mahanga Pihama, our director, just put that in there, without me. Which is probably the best thing. That’s why it’s nice to have a bigger team, you don’t have to make those decisions where you feel a bit whakamā or you’re not quite sure.”

Although it was a long, emotionally exhausting process – “months and months of wānanga before production even started, and then more wānanga during the edit” – she says that on the upside, for whatever reason, there has been greater Pākehā engagement with this documentary. “I’m really aware that the audience this time around is really different to the Ruapekapeka audience, which was probably more Māori.

“It feels different. And it might just be that I know lots of people from Waikato and Auckland, and it’s part of the Ihumātao story and those areas. Or maybe we’re having a shift as a country and we’re more open to it all.”

Forbes welcomes as many Pākehā viewers as possible, but wants to share some advice: “I sometimes have people say, ‘Oh, I feel so ashamed.’ I don’t want you to feel ashamed, I don’t want to create anything that makes people feel bad about their tūpuna or their history. I just want people to know the truth and feel love for those people that suffered. Remember them and feel love for them. And feel empathy for their descendants who are still suffering as a result.

“The reality is none of us actually know what our tūpuna got up to, and we’re not responsible for that. But we are responsible for learning from and retelling the stories.”

“For Māori and Pākehā I think it’s a real healing, going through this experience. Everyone says, you know, ‘I shed a tear at this part’. I feel like that’s good. This stiff upper lip stuff we’ve been raised with is also going. We’re becoming more open to expressing ourselves and talking about how we feel. It’s awesome.”