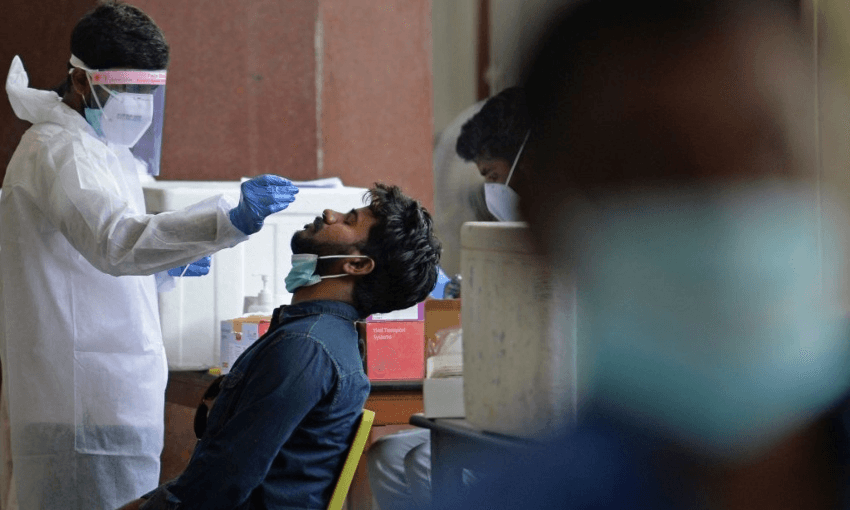 A traveller getting a Covid test at an airport in Chennai, India (Getty Images)

The Bulletin: New Zealanders facing hard road out of India

A traveller getting a Covid test at an airport in Chennai, India (Getty Images)

Good morning and welcome to The Bulletin. In today’s edition: NZers facing hard road to get out of India, mould returning to Wellington flats for winter, and analysis of Judith Collins opening up the Brash playbook.

With no repatriation flights in sight, it could be really difficult for New Zealanders stuck in India to get home. Radio NZ reported yesterday morning that there are just over 100 people currently in India who have managed isolation spots booked, but many are unlikely to make it. Some of them have been waiting since before the travel ban was put in place several weeks ago. PM Jacinda Ardern said that she sympathised with the situation people were in, but said the government couldn’t guarantee assistance in getting home. “We may not be able to go in and rescue people. They need to make sure they take every precaution they can even when they are travelling in desperate circumstances.”

The ban has now been lifted, but making travel plans in practice is extremely challenging right now. Under the new rules, NZ citizens and their immediate families are allowed to come in from the four high risk countries, but nobody else can. Stuff’s Melanie Earley spoke to a few people in that situation, facing both weeks long delays and exorbitant costs to get home, and it just sounds awful. The key route for people to get back to New Zealand from India is through Dubai, in the UAE, and an announcement was made overnight that the UAE has extended a ban on flights arriving from India for another 10 days.

To give a sense of just how tough it is to get out of India right now, even those who would normally have plenty of resources and clout can’t make it happen. Australian paper The Age had a story about leading cricket umpire Paul Reiffel, who is currently working at the IPL in India. He tried to get home several days ago, amid fears that there’ll still be nothing when the tournament ends, but found the way was already shut. As for the wider situation in India, it is still no better, and the horror looks set to continue for weeks or months to come.

The weather is starting to turn colder and damper, and the mould is coming back to Wellington flats. Stuff’s Ethan Te Ora has been doing a couple of stories recently about the state of renting in the capital, and his latest gives a sadly typical view of a set of properties managed by one particular company. Having been a renter in Wellington for a few years about a decade ago, it looks like little has changed.

A couple of useful commentary pieces on a bit of a mood shift from National leader Judith Collins towards carved-out spots for Māori representation. It was sparked by this Radio NZ interview, in which Collins said her party would stand against so-called “racist separatism”, both within National and without. Writing on Politik, Richard Harman argues that she is trying to use the same tactics employed by Don Brash in 2004. But there’s actually a lot of myth-making around the Brash years, and as commentator Ben Thomas writes on Stuff, opposition leaders who try to play this particular card almost never end up winning with it. The topic was also discussed on the latest episode of Gone By Lunchtime, particularly in relation to the issue that sparked it all off – the planned creation of a Māori Health Authority.

The winter energy payment for pensioners and beneficiaries is back, and it’ll be sorely needed this year. With hydro dam levels low, power prices are starting to get rather high – and are expected to stay that way for a while. This story from Radio NZ’s Charlotte Cook looks at the generating market generally right now, with the possibility that coal and gas will have to be ramped up to compensate for less hydro.

Water infrastructure is one of those issues that is difficult to get your head around, because of the scale and complexity. I know I certainly haven’t managed it. But fortunately, a useful piece from Newsroom’s Nikki Mandow came out this week, breaking down the issue region by region or on some other relevant metric, which paints a cumulative picture of how much remedial work needs to be done.

An issue I’d be keen to get your feedback on: The NZ Herald’s (paywalled) Jared Savage reports that more than a billion dollars worth of assets have been frozen or restrained by police, since a controversial law change came into effect a decade ago. The new law allows police to freeze assets without necessarily securing a criminal conviction – they only need to “show that someone profited from criminal offending to the lower standard of proof applied in civil cases.” Now in a society where there is a presumption of innocence until someone has been proven guilty, that doesn’t sit right with me at all. But perhaps I’m just being naive about the reality of organised crime? If you’ve got thoughts on the subject, send them through to thebulletin@thespinoff.co.nz.

A correction: You might have noticed a weird typo in yesterday’s Bulletin, when I started talking about Norway and then trailed off. The truth is, I had an idea for what I wanted to write and then completely forgot I had started the sentence altogether. So, for the avoidance of any doubt, here’s what it should have said, in relation to the ‘legacy fund’ that will be part of Silver Lake’s buy-in to NZ Rugby.

Out of that buy-in, tens of millions would be paid out to struggling provincial unions, and a ‘legacy fund’ would also be created – sort of like how Norway’s oil revenue gets put into a fund that keeps the welfare state going.

Right now on The Spinoff: Bernard Hickey warns that mortgage lending needs to be tightened up, amid the risk of a crash. Youth development worker Aaron Hendry calls on politicians to realise that young people who are homeless don’t care who’s in power – they just want solutions. Josie Adams reports on a new study that reveals burnout rates in the workplace. Tara Ward recaps the first three episodes of the new Handmaid’s Tale season. Stewart Sowman-Lund laments the end of Pods, and ranks the top 10 discontinued candies.

And we’re hiring: Daylight Creative, the creative studio within The Spinoff, is looking for a new partnerships editor. If you’re interested, or know someone who might, check out the job ad here.

For a feature today, a worrying look at the failures of ecosystem protection. The Guardian reports just 3% of ecosystems around the world remain healthy and intact, which in turn causes massive loss of biodiversity and accelerates ecological breakdown. Here’s an excerpt:

Prof Pierre Ibisch, at the Eberswalde University for Sustainable Development in Germany and not part of the study, said finding just 3% of land was intact was “predictably devastating”. He said: “We need to give nature significantly more space to carry us into the future, [but] I fear that the reintroduction of a few species in certain areas is not a gamechanger.”

Ibisch said the analysis did not take account of the climate crisis. “Accelerating climate change is becoming the overarching threat to the functionality of entire ecosystems. Yesterday’s mammal intactness hardly tells us a lot about the functioning ecosystems in the [global heating] age.”

In sport, the deal has been done. Silver Lake’s buy-in to a new NZ Rugby commercial entity has been approved unanimously by the provincial unions. But as the NZ Herald reports, the Players Association could still block it. Talks are expected to resume in the coming weeks. NZ Rugby also announced a $35 million loss for the 2020 financial year, after Covid destroyed both multi-nation Super Rugby and much of the international season.