Buckle up on the upside down of the world! RuPaul’s Drag Race Down Under is here, and so are our weekly power rankings. Who rose the top in episode one, and who had to kanikani away?

We know we’re not in Kansas anymore when the first queen who walks in the door of RuPaul’s Drag Race Down Under, Art Simone, exclaims, “We’re not here to fuck spiders!”, perhaps the most Australian of proverbs.

I’ll frontload this: Drag Race Down Under has far exceeded my expectations. Call it cultural cringe, but I was expecting this version to be a bit jankier, a bit cheaper than the other seasons. Although the set isn’t quite a dead ringer for the flagship show, it looks, sounds and feels as good as any of the other spinoffs (UK, Canada, Holland) – and, as demonstrated by the concurrent run of US season 13 and UK season 2, the spinoffs sometimes exceed the original.

The first episode gives us the best of Drag Race with none of the slack. We get drama, we get shade, we get a lot of bad puns – including a Lindy Chamberlain reference that’s perhaps too dark for Drag Race – and we get the full spectrum of runway, from an all-time question mark of a look right through to genuine editorial excellence. That’s probably helped by the theme of “Get To Know Ya”, which requires the queens to present two looks – a “born naked” look (good luck with those viewer complaints, TVNZ) and a “hometown” look. Yes, two of the New Zealand queens do the exact two looks you were expecting, but it’s better than you expect.

Hell, we even get a lip-sync that ranks among some of the best from the show’s history!

Also, excitingly: There seems to be an attempt to engage with both New Zealand and Australia, rather than the show just being Australia with a bit of New Zealand tagged on. RuPaul even says “kia ora” passably, you guys! It’ll be interesting to see how much the show engages with local culture (especially indigenous) throughout the season, and even though the contestants are weighted towards Australia – seven Aussie queens, as opposed to three New Zealanders – it’s refreshing to see that disparity isn’t reflected in the show’s content. (Being filmed here also probably helped!)

One strange note, however: Taika, were you there? The “native son of New Zealand” shows up for a mini-challenge where RuPaul auditiones queens for his remake of Thor called “Thar” – and if you’re new to the franchise, welcome, this is the level of parody we’re working with. There was something off about Waititi’s appearance. It was as if he wasn’t actually responding in the moment, but that what we were seeing was a series of pre-recorded reactions. Pre-reactions, if you will.

Anyway, onto the rankings!

To listen to Chris Parker and Eli Matthewson’s weekly Drag Race Down Under recap show, follow The Real Pod on Apple Podcasts, Spotify or your favourite podcast provider. Read that name out loud if you don’t get the pun.

Ugh, it sucks to see Jojo here, because I was so stoked to see her turn up in the show. She’s the only Indigenous queen in the season, and she addresses it right from the start, with a heartwrenching moment in front of the makeup mirror where she says that she never had to worry about being gay because they’d weaponise her skin colour against her first. And her second outfit on the mirror, though not flawless, is as strong a political statement as we’ve ever seen on the show.

The outfit, a twist on a Marie Antoinette-type look, had a sign that was revealed at the back: “Always was, always will be”, a statement that declares, correctly, that the First Nations people of Australia have never ceded sovereignty over their country. My favourite Drag Race is a political Drag Race, and this played right into my taste like bloody catnip.

She gave her all in the lip-sync, and in my opinion, should have stayed. It’s a sour note to end a great first episode on, and I hope there’s some scope for her to return to the competition, or a future All Stars. 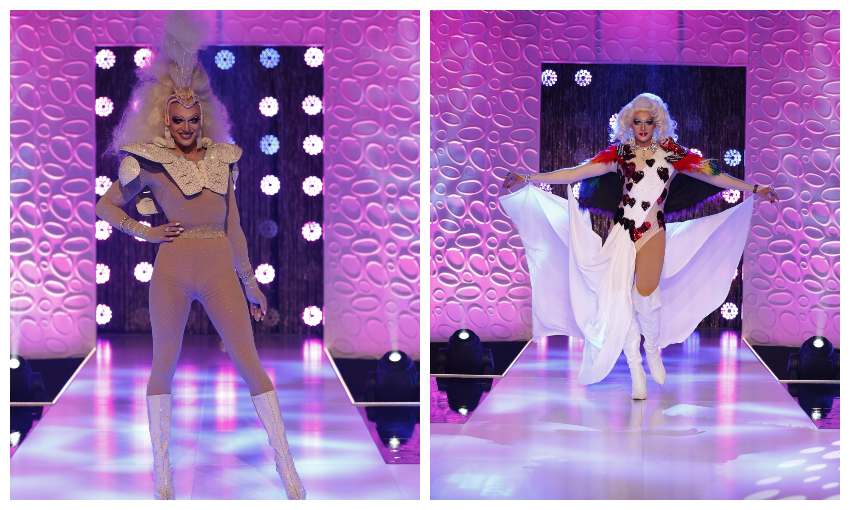 It’s a rough start for the House of Drag runner-up. Even though she wins the mini-challenge, thanks to apparently delighting Ru, she’s read by seemingly every other queen in the room for her wigs, and neither of her looks pop with the judges. Her “Hometown” look (above right) requires her to explain how exactly it relates to Auckland, and one of the core rules of Drag Race is that… you shouldn’t need to explain your looks. It should be clear to us. It’s Drag Race, not Drag Spark Notes.

Though absolute kudos to her for namedropping Tāmaki Makaurau as much as possible! It just sounds better than “Auckland”, you guys, and it’s way harder to turn into an acronym. JAFTM doesn’t have the same ring to it as Jafa, you know?

She also absolutely kills the lip-sync, with a witty, energetic performance of ‘Tragedy’ by the Bee Gees. It clearly impressed Ru enough to keep her around, and a comeback for this queen isn’t out of the question. Maybe she can borrow some wigs! Oh, Coco. She gave great talking head, but while the right look is a fun twist on the hometown theme, that left look is more LookSharp than Drag Race, and it landed her in the bottom three as a result. Coco’s funny as hell though, and I can’t wait to see her read the contestants to filth for a few weeks longer. 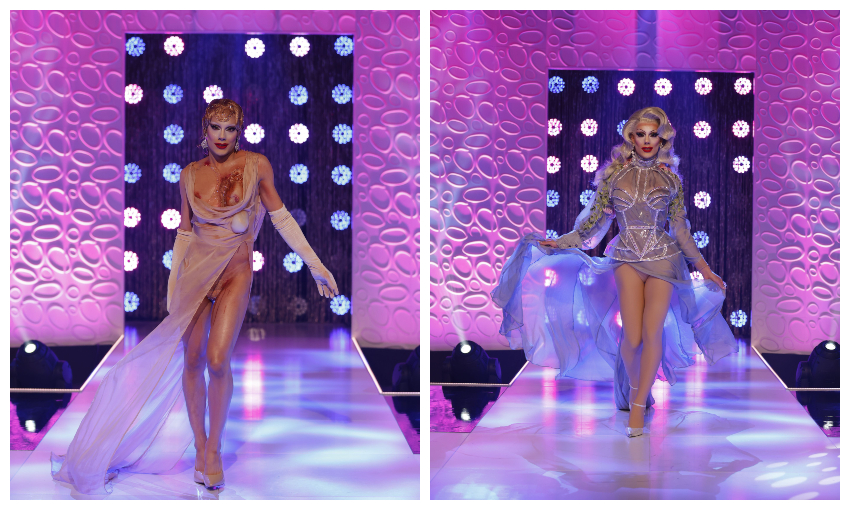 Et al, et al. The left look is a clever, quite stunning take on her non-binary identity. The right look is fine! I’m keen to see more from this queen, but she earned her safe spot this week. 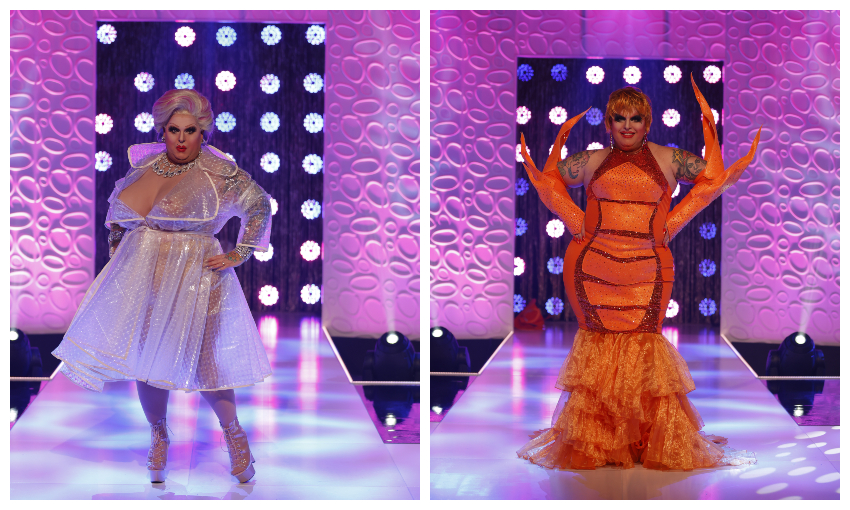 Lovely! No notes, Maxi seems fun. Safe for a reason, though! Look, at least we got the sheep costume out of the way early on.

I was worried for Anita and Kita coming into the competition – and at least they acknowledge right from a jump that they often come as a package – but Anita did a great job at standing out this episode. Let’s be honest: That’s probably the best sheep drag you’re ever gonna see. Even more pleasingly, Anita’s energy is a very specific brand of genial weirdness that is often missing from the more cutthroat American seasons, and it’s deployed very well here. We all love shade, sure, but we need the sunlight too. Shine bright, little Wigl’it! Even though she ripped her second look at the back, Scarlet Adams managed to be in the top three this week! That first look probably makes this post NSFW – sorry for the late warning – and is likely what secured her spot here, because that back-ripped look is… fine? Look, we probably had to do an All Blacks look as well so at least we got it out of the way!

Mean showed up to play, which really excites me. My main exposure to her, and by proxy Anita, has been on House of Drag, and it’s exciting to see her persona outside of the Kita & Anita package. That All Blacks look is far more polished and creative than it could have been, and it pokes fun at the traditional All Black look while still being genuinely glamorous. Mean clearly came to play, and there’s a professionalism to both of her looks that excites me, because I’m a boring person who likes when people actually follow the brief and do the assignment. 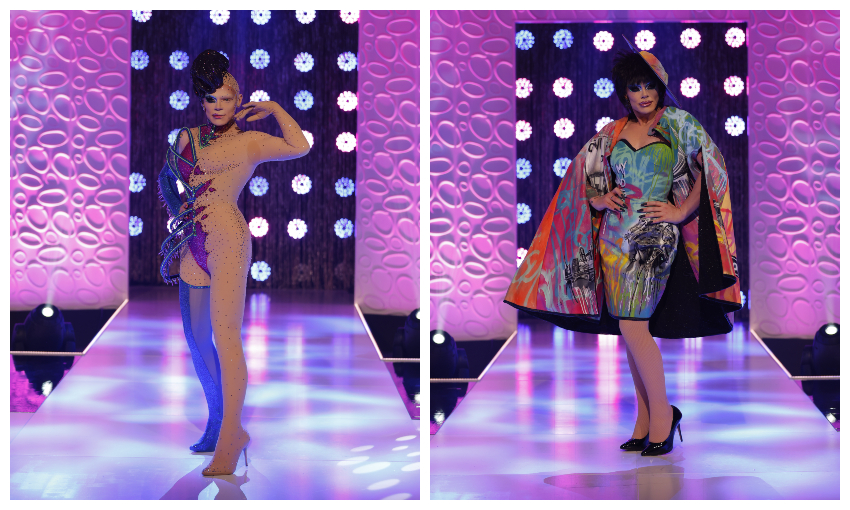 This is a direct plea to Art Simone, who also made it to the top three this week: I would like that cape please.

But seriously, Art Simone deserved her spot, and if Karen from Finance hadn’t performed her looks as well as she did, Simone would’ve been a lock for the win. Simone also gives great, pointed, talking head, and while I do love a bit of nice, I also love a bit of mean! Simone’s a contender, baby, and I’m stoked to see her go further. 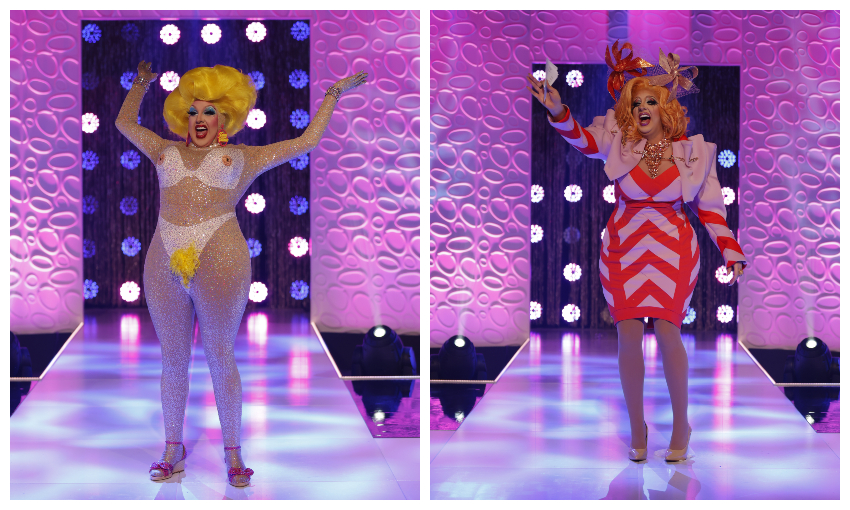 Best name, best look. If you haven’t seen the episode, I entreat you to at least watch Karen walk the runway in that second look, where she gives pure Melbourne Cup attendee realness. Not only is the look spot on, but she sinks so far into that character that she might as well tumble off the stage. While we don’t necessarily all know that person, we’ve definitely seen a photo of someone who goes to the horse races just to race themselves to the bottom of a glass of prosecco.

Episodes of RuPaul’s Drag Race Down Under screen weekly on Saturday nights, from 6pm on TVNZ OnDemand and 8.30pm on TVNZ2.